In 2016, for the first time in several decades, the value of the global cigarettes category as a proportion of total tobacco sales, fell below 90% - to 89.8% to be exact. As a telling milestone it is not perhaps an especially spectacular one but it is nonetheless a central datapoint from the newly released Euromonitor TB17 system which says as much about the key trends impacting on the tobacco industry today as any other. Indeed, according to our newly released forecasts, the share of cigarette value in 2021 will reach 86%. Not a vertiginous drop in its own right but given the previous decline of a comparable magnitude (from 93% to 90%) took more than 15 years to occur it seems clear that the pace of change is accelerating.

The drivers of this (albeit currently) mild disruption to the cigarettes category’s dominant position within the global balance of tobacco and nicotine consumption are an increasingly potent mixture of the established (and amplified), in the form of volume losses and the emerging, in the form of new nicotine delivery products.

The newly minted negative volume turn in the Chinese market continued apace in 2016 and combined with ongoing volume difficulty in some of the usual suspect major markets to put severe pressure on the global industry’s pricing power. Forecast value CAGR on a constant currency basis is projected to turn negative in four out of our seven researched regions between 2016 and 2021, representing what could amount to a pivotal turning point in the industry’s modern history. 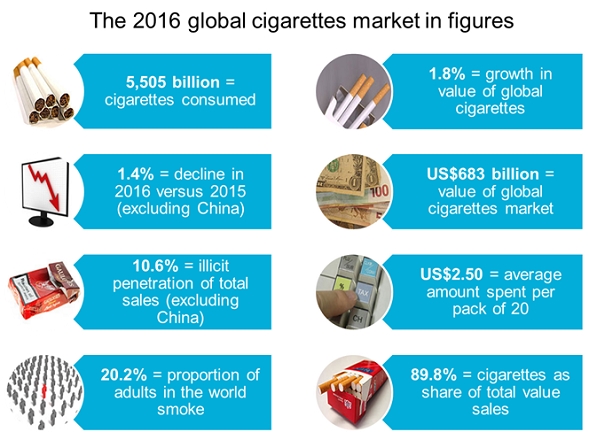 Again in 2016, the performance of the global cigarette landscape was varied and profoundly coloured by unprecedented volume decline in the Chinese market of almost 6% - following on from last year’s 2% volume loss – caused by apparent increased control of production centrally and the increase and pass through of wholesale taxes in 2015. As indicated after last year’s research, we anticipate that volume contraction (though moderated) is the new normal in the world’s largest market with a projected forecast CAGR decline of 2.3% up to 2021. At a total level, global volumes dropped over 3% in 2016, the worst volume loss in cigarettes in recent memory. However, China accounted for almost 80% of the total 180 billion stick volume decline.

Indeed, excluding China, world volumes showed some resilience in 2016, with volume decline of 1.3% representing the industry’s best year since 2012. Declines moderated significantly in Eastern Europe (down from 5.1% in 2015 to 2.7% in 2016) and the Middle East and Africa (including this year 10 new directly researched markets) saw volume growth of 4.5% (eye-wateringly high in the context of the industry’s modern history). However, these were offset by deteriorating volume positions in the Americas and Australasia.

The inclusion in the 2017 edition database of 20 additional research markets from across four regions is very welcome and is something which adds further detail to our coverage of the industry’s emerging markets. Taken as a whole these markets represent a significant volume bloc (195 billion sticks in 2016, forecast to increase to 220 billion by 2021) while individually they are diverse ranging from the hefty global presence of Bangladesh to minor regional players such as El Salvador and Oman. Broadly speaking growth is a feature of these additional markets (6.5% in 2016, with absolute volume expansion of 12% projected between 2016 and 2021) but it is not universal. Almost half of these markets (eight out of twenty) saw cigarette volume decline in 2016 and almost as many (seven) are expected to experience continued declines up to 2021. In 2016, the Iraqi market saw the highest legal retail volume growth of 41% (in very fluid conditions) with Tanzania (a relatively mature market) seeing the most elevated volume declines of the 20, at 3%.

The single greatest driver in diluting (even partially) and potentially eventually dislodging the combustible cigarette’s central position in the balance of tobacco and nicotine consumption is continued growth in vapour products and in particular the emergence of heated tobacco as a viable alternative mode of consumption.

In 2016, vapour products as whole (encompassing closed and open liquid nicotine vaping systems) and heated tobacco grew at 34% in constant currency terms to reach US$12.3 billion. E-cigarette products in the form of closed or open systems accounted for US$10.2 billion with heated tobacco (largely accounted for by Japan) representing a further US$2.1 billion. The category as a whole is forecast to grow to US$34 billion by 2021.

Our new data provides strong evidence, not only of growth in use of vapour products as a whole but also of further changes in the balance of consumption within the broad segment. In 2014, open vaping systems were the clear preference of consumers accounting for 71% of category value with closed systems a distant second on 29%. In 2016, open vaping systems share shrunk to 59% with closed systems on 24% and heated tobacco on 17%. By 2021, our forecasts suggest that tobacco vapour will be the single largest vapour category, accounting for 45% (US$15.4 billion) of total category value with the share of open systems having more halved since 2014 to 32%.

As mentioned towards the beginning of this piece, in this edition, we are forecasting a little over 1% constant value decline in global cigarettes between 2016 and 2021. It is notable that the real terms, absolute US$7.7 billion loss this represents to the global tobacco industry is handily compensated for by the US$13.2 billion growth in heated tobacco sales in the same period. Simply put, rather in fact than declining, combined cigarettes & heated tobacco value sales are forecast to grow 1% in constant terms. We believe that the category will be a solid presence in at least 35 global markets by 2021, accounting for a share of 3.5% of total global cigarette and heated tobacco value (excluding China). In Japan, share of heated tobacco is forecast to be 22% by 2021 and in some markets we expect it to rise above 5% (such as Turkey).

All of which is to say that heated tobacco -on these indicators – is truly a coming force in global tobacco.

Germany: Tearing Down the Wall of Cannabis Prohibition

Sustainability in Tobacco and Cannabis: the Role of Regulators, Businesses and Consumers

Cannabis in North America: Ease of Access and Format Diversity Drive Adult Use

Tobacco Consumption in the Middle East and North Africa set to Rise, Despite Global Decline

The global tobacco industry bounced back from the early impact of the COVID-19 pandemic to record strong volume growth in its key category, cigarettes. At the…

In this report, we cover the main developments in the cannabis industry. Including regulatory updates for all major markets. Industry and market updates from…