There has been much attention paid to Starbucks’ ambitious plans to finally enter the Italian market. The company has long viewed Italy as forbidden territory because of Italians’ strong national pride in their coffee culture, but finally decided to take the leap on the wager that younger Italians are less particular than their elders and may be interested in the same coffee drinks as their peers everywhere else. This has naturally inspired much hand-wringing about the direction of Italian coffee, both in Italy and abroad.

Receiving less attention, but perhaps more significant in the long run, is the changing nature of Italy’s most important coffee company, Lavazza. Once a national company that focused its efforts nearly exclusively on fresh coffee within Italy, Lavazza is now the third-largest coffee company in the world, with interests in many more categories and geographies than it once did. Creating a company that appeals to Australians, Americans, and Estonians the way it does to Italians has naturally required Lavazza to change the way it operates. The major question hanging over the future of the company is whether it can do that while also keeping its core identity intact.

The coffee market in Italy is stagnant, with volumes expected to expand by just 0.2% during the entire forecast period. The Italian coffee market is simply too mature for major volume growth to be possible anymore. What growth there is now comes mostly from increases in population and income and, given Italy’s low fertility rate (1.4 children per woman) and anaemic economy (under 1% growth every year since 2010), that means that the situation is unlikely to turn around anytime soon. 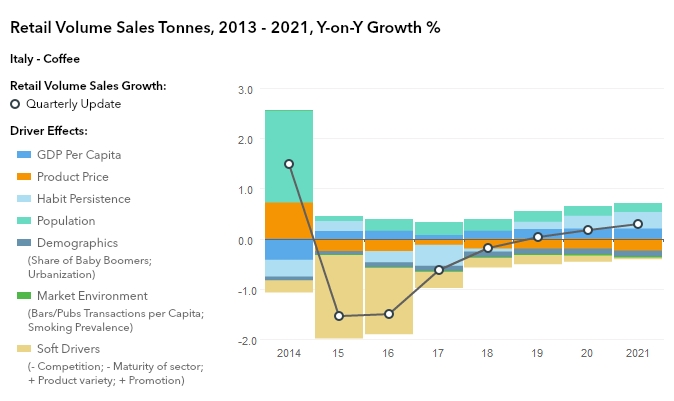 As the market leader in Italy, with over twice the share of number two Nestlé, this is obviously a major problem for Lavazza. The company’s sales in Italy have been mirroring the overall market trend and have averaged less than 1% annual growth since 2011. Clearly Italy is not capable of delivering major sales growth for Lavazza any longer. Instead, the company has turned abroad. 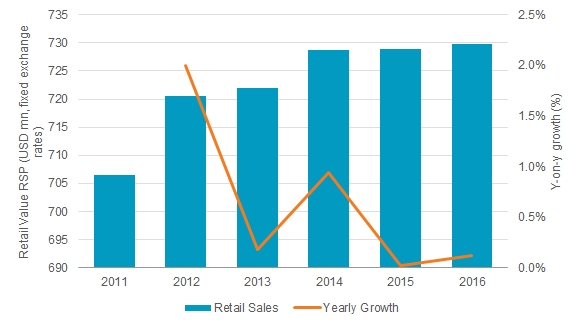 Expansion in Australia and the US has followed traditional routes

One major avenue of Lavazza expansion has been investment in organic growth, especially in the English-speaking world. In Australia, the Lavazza family retook control of its branded coffee in 2015 (the rights to which were sold off decades before) and invested in improving the distribution infrastructure, turning around years of slumping sales. Meanwhile, the US saw its first ever televised Lavazza ad campaign as the company set an ambitious target of USD300 million in annual sales in the American market in the next few years. 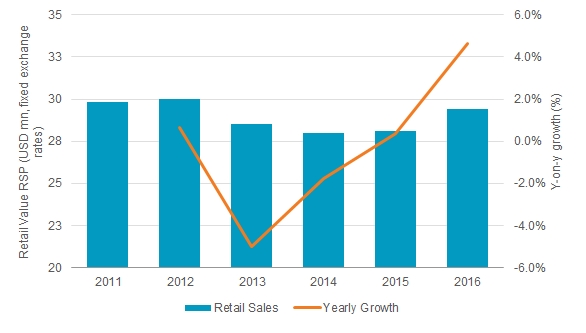 New product development has also been aggressive. Some notable launches in the past few years have been ¡Tierra! (a sustainably sourced ground coffee), the Jolie (a pod machine that brews espresso drinks while making no more noise than a refrigerator), and a compostable pod made from thistles. Apart from the geographies involved though, none of this has been significantly different than Lavazza’s traditional category involvement. In markets like the US, it is still positioning itself in the mid-to-upper price tier, with a primary focus on standard fresh ground coffee, and products like ¡Tierra! are designed to shore up Lavazza’s position in categories in which it is already a major player instead of taking the company in a new direction.

Acquisition activity has taken Lavazza to new corners of the market

Anti-trust regulators forced DE Master Blenders 1753 and Mondelez International to sell several major brands before they would approve the merger that eventually created Jacobs Douwe Egberts. The decision of these regulators would forever change Lavazza, which took advantage of this opportunity to buy all of the significant brands that were divested.

The first was Merrild, purchased in 2014. This boosted annual sales by USD92 million annually and turned Lavazza into the leading coffee company in Denmark. That marked the first time Lavazza had ever been the market leader somewhere other than Italy. It also gave Lavazza over 10% share in all three of the Baltic states, where its presence was previously minor. Not only was Merrild operating in non-traditional geographies for Lavazza though, it was also in a non-traditional market niche. In Denmark, Merrild is priced at USD13.5/kg of standard ground, under the market average. In contrast, Lavazza-branded fresh ground is USD22.9/kg. In other words, with the Merrild acquisition, Lavazza signalled its willingness not only to enter new markets, but also the value segment of the market, in which it had previously shown little interest.

More significant was the massive deal that brought Carte Noire into the Lavazza brand family. Adding Carte Noire to its portfolio increased Lavazza’s annual sales by over half a billion dollars and instantly made France into its most important non-Italian market. In many ways Carte Noire is a similar brand to Lavazza, as both operate at a similar level of the price tier. Carte Noire, though is also a major player in instant coffee, with USD45 million in annual sales in France alone. A long-time holdout to seriously entering the instant coffee market thus found itself in control of one of the largest instant coffee brands in the world. 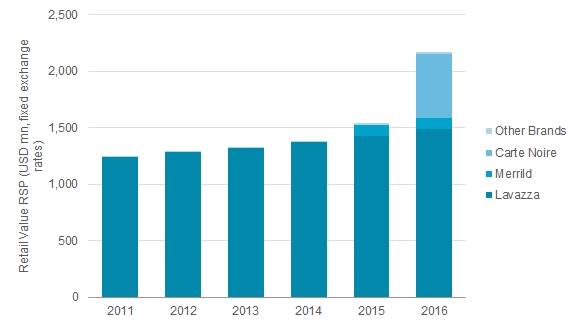 How Lavazza learned to stop worrying and love instant coffee

Lavazza is now 17th in the world in instant coffee sales. That is nowhere near as significant as its share in fresh coffee, but is still an odd place to be in for a company that had no significant instant coffee sales at all as recently as 2014. For a long time Lavazza leadership mimicked the prejudices of Italian coffee drinkers in general, which held that instant barely deserved to be considered real coffee at all. However, such a prejudice is a liability when operating in markets with major instant consumption like Australia and the UK, and was incompatible with the company’s new direction.

Carte Noire and Merrild are certainly responsible for most of these newfound instant sales, but they were joined by a Lavazza-branded instant coffee, known as ¡Prontissimo!, in 2015. ¡ Prontissimo! is in many ways a very traditional Lavazza brand. It is marketed as a premium offering and occupies the typical Lavazza spot at the mid-to-upper tier of the price range, but the very fact that it is an instant coffee makes it remarkable. The idea of a Lavazza-branded instant coffee receiving significant investment from the company would have been dismissed as ridiculous in the relatively recent past, but in Lavazza’s brave new world the interests of consumers in countries that drink lots of instant coffee must be taken into account. ¡ Prontissimo! is in many ways symbolic of the future of the company: highly traditional while also being radically new, and clearly designed to appeal to coffee drinkers in countries where Lavazza has traditionally had only a minor presence.

Lavazza’s ambitions are not universal, however. In an interview with The Telegraph, Vice Chairman Giuseppe Lavazza ruled out further expansion in China, citing Chinese consumers’ preference for sweet-tasting coffee. Certainly such coffees would be well outside of Lavazza’s traditional area of expertise, but that means that Lavazza is passing on a significant chunk of future global coffee growth. Sales of instant coffee mixes are expected to grow at 4% annually during the forecast period, faster than any other segment of coffee, except pods. It is not only Chinese consumers who prefer the sweet taste of these drinks, but also most other Asians and a significant chunk of consumers in the Middle East and the Balkans. It may be difficult for Lavazza to resist joining this category for long. Indeed, the first breach has already been made: Carte Noire has 8% of the instant coffee mix market in Ireland. 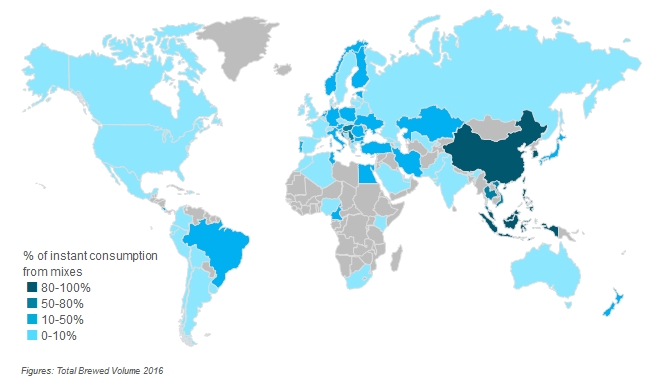 The debate over instant coffee mixes encapsulates the larger dilemma. To truly compete with Nestlé and JDE, Lavazza would need a presence in most major categories and geographies. A Lavazza that tries to be all things to all people though, is a Lavazza that runs a substantial risk of diluting its brand and of losing its way as a company. The challenge facing the Lavazza family and their company in the years ahead is how far they can go in changing Lavazza’s traditional business model without losing the attention to quality that made that model successful in the first place.