The astonishing success of Frozen clearly proved that the licensing landscape is still far from saturated and there is still scope for the development of successful new properties as well as existing evergreen franchises as I also explore in our “Licensing: A Billion Dollar Character Franchises” global briefing. There have been many new and sequel movie franchise releases following Frozen all in the search of the next “big thing”. Some of them have been great successes such as Minions (a prequel to Universal Studios’ Despicable Me series) in 2015 and Disney’s brand new creations Inside Out in 2015 and Zootopia in 2016. 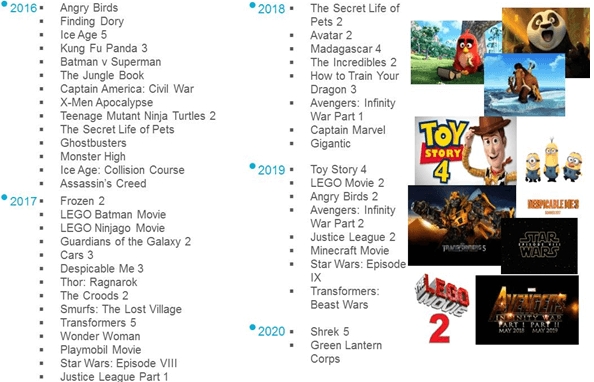 Minions’ global box office takings reached US$1.16 billion since the launch of the movie in 2015 making it the most successful cartoon animation of that year. Licensed merchandise cross-industry sales also followed the franchise’s popularity as the property took over Frozen products sales in many geographies including the UK. Disney Pixar’s new 2015 offering, Inside Out, was a big success earning an impressive US$857 million at the box office worldwide. The company’s other new franchise in 2015, The Good Dinosaur, however, fell well short of expectations becoming one of the worst in terms of takings amongst Pixar's 2016 releases and the first to lose money for the animation company.

Who will be the next Peppa Pig?

In 2016, Disney’s Zootopia, surpassed US$1 billion mark in global box office takings, making it one of the top films of the year, and the second highest grossing Disney Animation Studio film behind Frozen. One of the major reasons for Zootopia ’s success was the way in which it tells a story that appeals to both adults and kids emotionally. This is also one of the rationale behind Frozen’s enviable popularity. Universal Studios’ big animation movie launch for 2016 was The Secret Life of Pets which met the screens in June while its IMDb (the Internet Movie Database) approval rating stood at 6.7/10 in November. Angry Birds Movie and Finding Dory were among the other animated releases in 2016.

According to an interview with LIMA (Licensing Industry Merchandisers Association), the licensing industry is on the look out for the next Peppa Pig. This is certainly not surprising given the franchise’s rising popularity, global expansion, increasing merchandise sales and royalty revenues. Amid new releases following Frozen; Minions, Zootopia and Secret Life of Pets all have the potential to be game changing new properties in the licensing world. Bloomberg highlights that if a movie hits one billion dollars in sales, it is a safe estimate that tie-in merchandise sales in the toys aisle only will average between US$250-300 million. Given this, it is not surprising that licensors are extremely eager to pursue the next billion-plus franchise with almost endless new as well a sequel/spin off releases.

Look beyond the obvious

In apparel and footwear, childrenswear has always been the forefront in licensing whereas in home and garden, bed textiles has been the front runner. In beauty and personal care, baby and child-specific products, fragrances, oral care, bath and shower, and colour cosmetics are the categories that have been the key to drive significant revenue for licensors and licensees.

Could all this change? Could the next big franchise be a total cross-industry game changer helping to increase sales in traditionally not very licence driven categories helping them to secure a billion? It is certainly hard but not impossible. There are many examples if the property is right and connects with the consumer, success follows. Categories where licensing penetration is already high could be an obvious choice by many licensors which can also be deemed as risk-free. However, it should be noted that as much as they might be attractive to invest in, they might also be oversaturated by existing franchises. The solution might as well be looking into areas where licensing penetration is relatively low.

Take Frozen for example. In dressing-up and role play category of traditional toys and games, licensing penetration hovered around one third in value terms until 2014. The launch of Frozen franchise, almost revitalised the category and in just one year licensing penetration recorded a growth of six percentage points to reach 40% in value terms. In eyewear, licensing did not really exist 10-15 years ago. Now, three quarter of it is licensed. In consumer electronics, headphones is being tipped to be the category to watch in terms of licensing which is well in place to trail eyewear. Going back much further, Teenage Mutant Ninja Turtles franchise drove pizza sales across a number of geographies in the 1980s, which is a clear example of how a new popular property can revamp an entire food category.

The Hotel and Hospitality Show

The disposable hygiene industry is expected to see continued growth after a transitory slowdown in 2021, supported by improved health awareness, product…