Few confectionery brands can rival the global reputation that Ferrero and Lindt possess. Ferrero Rocher and Lindor chocolate are seen as quality goods reserved for refined occasions and wealthier shoppers. This reputation is part of their success – they are seen as status symbols for people to aspire to purchasing, regardless of their price tags. While strong similarities exist between the two companies – 73% of all Lindt’s sales occur in categories where Ferrero is also present – there are serious differences in their strategic priorities, which can be explained using Euromonitor International’s Competitor Analytics tool.

Lindt Versus the Rest: Lindt's Positioning in Relation to Key Competitors 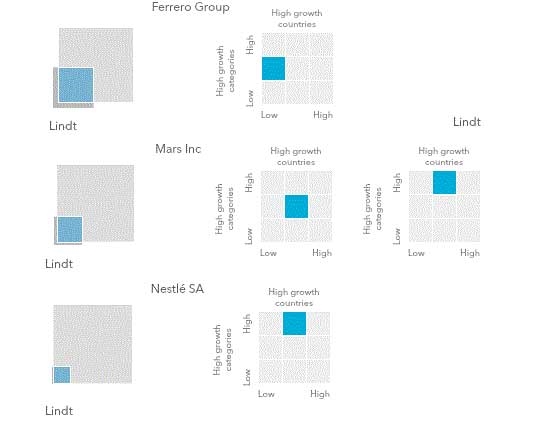 Ferrero has a more diverse portfolio of products than Lindt, for which chocolate confectionery represents 99% of all sales. For example, Ferrero has a significant interest in spreads, particularly through its Nutella brand, and sugar confectionery. This means the company will have different goals to Lindt, yet chocolate remains a strategic priority for the company – chocolate confectionery represents 60% of Ferrero’s sales. Rather, the greatest difference between the two companies lies in their attitudes towards developed and developing markets.

Success in the West

Lindt has been proactive in developing its brand in developed markets, particularly the US. In 2014, the company purchased US chocolate manufacturer Russell Stover, a group it had strong overlap with, as both are premium confectioners. While the acquisition raised eyebrows, it makes sense – the company is aiming to achieve organic sales growth in the US, and acquiring Russell Stover will help Lindt capitalise on demand for premium goods. Although per capita consumption is declining in North America, value sales are increasing – consumers are purchasing higher-priced products such as dark tablets. This favours Lindt, and consumers’ passion for high-quality chocolate will continue to grow, with value sales increasing ahead of volume sales. In the US, therefore, Lindt has effectively leveraged its European roots to build a reputation for a premium product, and is now achieving significant sales growth.

The problem is that, while it may have a successful recipe for developed markets, Lindt has little or no strategy for developing counterparts. Just 4% of its total revenue comes from emerging economies. This compares with 27% – US$3.8 billion – for Ferrero, which is equivalent to 91% of Lindt’s entire sales in 2013. Chocolate manufacturers other than Lindt have all looked to develop their presence within developing markets via acquisitions and investment in manufacturing.

Anything Lindt can do, Ferrero can do better

Using Competitor Analytics, we can also see that Ferrero has effectively balanced growth between developing and developed countries. Over the past five years, chocolate confectionery sales in

Russia and China grew by over US$600 million. Although growth in China and Russia has dwarfed developed markets in percentage terms, Ferrero has still achieved value gains of US$550 million in traditional markets, such as France, Italy and the US. Ferrero has also committed to improving its presence within other lucrative countries, such as the UK, where it is launching its Kinder range in share bag format. 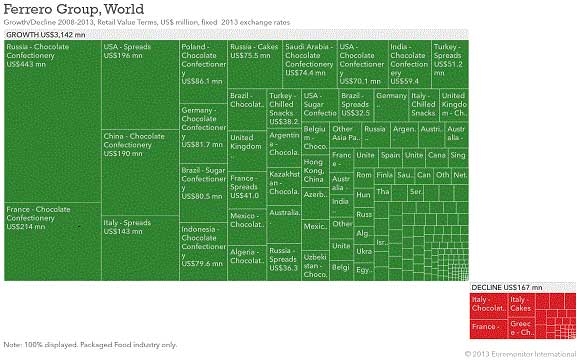 Ferrero’s ability to enjoy the best of both worlds brings Lindt’s docile approach further into question. The Lindt brand is an ideal fit for countries such as China and Russia, where statements of wealth are common and there is a growing middle class. Growth in China is anticipated to continue, with an additional US$1 billion of sales in chocolate confectionery expected over the next five years. In addition, seasonal products and a culture of gift giving are prevalent in the Chinese market, which makes it a particularly conducive market for both Lindt and Ferrero. Ferrero should consider tinkering with its formula to push the Ferrero Rocher brand in retailing and reinforce the brand’s premium image; for Lindt, a more radical overhaul is required, but it could be potentially lucrative.