In the hypercompetitive ecommerce industry in Asia Pacific, retailers are moving beyond competing on price to competing on logistics, getting packages to more people with greater speed and security.

The strategies employed range from expanding traditional in-house logistics capabilities to creative ones such as investing in store-based retailers, using new types of pick up locations and hyperlocal delivery. As the ecommerce giants battle it out in this new frontier, it will be imperative for all retailers to keep up or risk losing share to those that can delivery quickly and efficiently.

Incentives to invest in the future have fuelled infrastructure expansion 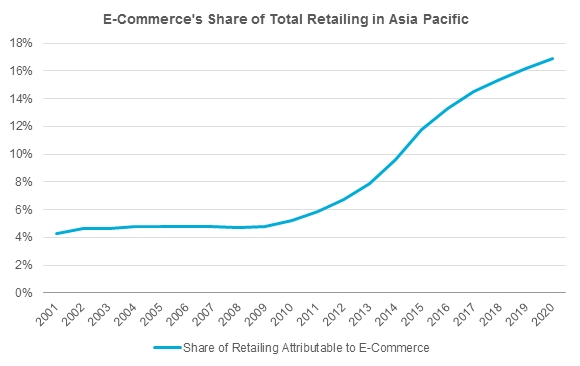 Retailers with a stake in the future of e-commerce cannot settle for low prices alone, but must continue advancing their own capabilities. JD.com, the second largest internet retailer in China, has grown to new heights partly because of its focus on logistics. Operating its own retail and logistics arms has been expensive, but has helped the company grow its share of internet retailing sales in China to 20% in 2015, an increase of five percentage points in just two years. It now boasts the ability to provide same-day delivery to 43 cities and next-day to another 256, which accounts for over 80% of its orders.

Alibaba, its biggest competitor, is responding in force. After relying heavily on third party fulfilment services to keep costs low, it has been on a spending spree, with over US$6.3 billion spent on logistics-related deals from 2013 to 2015. The intent of this expansion is to increase its capacity for next-day delivery to 50 cities, which is formidable to most, but still far behind the rising number two player in the country.

Alibaba may be behind JD.com when it comes to the extent of its Chinese fulfilment capabilities, but it is forward thinking in other ways. Its decision in April to buy a controlling stake in Rocket Internet’s Lazada gives it instant reach into Southeast Asia’s largest marketplace. International expansion into a single country is difficult enough for retailers, and this gives Alibaba a presence in six more, each with their own set of difficulties. Magnus Ekbom, the head of Lazada Indonesia said that “Indonesia is pretty much running out of logistics capacity.” Acumen here is hard earned, and the development of fulfilment centres in the country gives Lazada (and now Alibaba) a key advantage in the region. As Asian economies become more entwined, it is this sort of knowledge that will translate into economic power.

Physical storefronts represent a significant opportunity given their widespread nature and the fact that in-store retailing still represents 93% of all sales in the Asia Pacific region as of 2015. In China, in 2015, Alibaba and JD.com both invested in store-based retailers to boost their supply chain strength in specific categories. Alibaba invested in the electronics retailer, Suning, and JD.com with the supermarket operator, Yonghui. Cross-channel access here is a boon to the increasingly omnichannel shopper. Suning, for example, provides valuable services that an online-only retailer could never hope to provide like in-store pick up, returns, and product servicing.

Frequently visited locations can be valuable O2O locations for merchandise pick-up, especially in cities where packages must be signed for to ensure security, but where shoppers find themselves working during the day. Rakuten and Amazon both make use of the ubiquitous convenience stores in Japan, allowing customers to pick up their online orders at outlets like of Lawsons and Family Mart. New ideas have also sprung up that take advantage of foot travel in transit terminals. ATT Skybox is just one example of transit-oriented retail solutions within Central Bangkok, but the robust state of public transit in a number of Asian economies and the presence of popular payment cards which are already linked to transit but usable in retail stores like in Japan and Hong Kong add to the potential.

Finally, there is the allure of hyperlocal delivery services, which make use of flexible labour and mobile phone penetration to provide for last-mile deliverymen at a moment’s notice. Long term profitability is a real question mark here, but the cost of labour and the density of Asian cities seem to indicate that if any region might be able to pull it off, it would be this one. Medicinepower and Pluss App in China and India indicate that ideas in the space are spreading beyond food and impulse retail. These apps offer consumer health goods to those too sick to leave their homes. Big players are also involved in the space, with Alibaba and JD.com acting as standouts. Alibaba has invested in Ele.Me, which delivers food from over 40,000 supermarkets, while JD.com has merged its original O2O arm JD Daolia, with a separate, firm Dada Nexus Limited, giving JD.com instant access to Dada Nexus’s presence in 37 key cities and its 1.3 million delivery people.

Companies without an infrastructure advantage will need to be resourceful

The novelty of e-commerce for many Asian shoppers and businesses means that there is a great deal of room for expansion in a number of directions. Adding new products, services, and customers at home and abroad can be done in house or through strategic partnerships.  Ultimately though, a significant advantage will lie with those who have the ability to deliver goods quickly and efficiently. To achieve this, the infrastructure which enables fulfilment must be adequate. Often this means that companies will need to invest in their own infrastructure or team up with companies that already have. In many cases however, there are still ways in which businesses can make use of the current tools available to them. Finding new efficiencies and making use of underutilized resources can be creative solutions to the same problems, and cheaper solutions at that.

Top Consumer Trends That Will Change Retail In The Year Ahead