Asia Pacific is the largest foodservice region in the world, and understandably one of the most appealing expansion targets for international operators. However, the region is also highly diverse, encompassing countries that vary widely in income level, market maturity, demographics, foodservice spending, and dietary preferences. In particular, meat, fish, and seafood consumption habits are very different from market to market, ranging from India where many consumers are vegetarians, to Hong Kong, which has the highest per-capita combined meat and seafood consumption in the world in volume terms. Consumption habits are also changing quickly, meaning operators not only need to tailor their strategies specifically to each local market’s preferences, but they must also to be ready to adapt quickly as new preferences emerge.

Per Capita Meat, Fish, and Seafood Consumption by Market in 2014 (Total Volume) 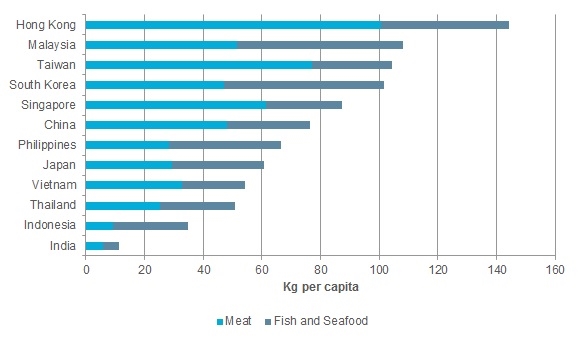 A look at per capita meat, fish, and seafood consumption by market highlights just how wide this spectrum is, ranging from 11 kg per capita per year in India to over 144 in Hong Kong. Some of this variation is due to income differences to be sure (Hong Kong has 23 times the per capita annual disposable income of India), but it is also due to unique cultural preferences. A decade ago, the UN’s Food and Agricultural Organisation (FAO) estimated vegetarians make up as much as 30-40% of India’s population, with a much larger percentage choosing to follow a vegetarian diet at least part of the time. Even further, many Indians, vegetarian or otherwise, choose not to eat beef for religious reasons, posing a particular challenge for many leading fast food operators.

It’s also notable that In some markets meat and seafood consumption barely seems to correlate with income at all, such as in Malaysia and China, where meat consumption punches significantly above both countries’ weight in income. While both have annual per capita disposable incomes of less than US$8,000, per-capita consumption is in line with that of Germany and Denmark, both of which have average incomes of between US$28,000 and US$30,000. On the other end of the spectrum, Japan’s total protein consumption is low relative to other Asian markets with similar income levels, due to both a general preference for fish and seafood and traditionally low protein consumption as part of the Japanese diet.

Per Capita Meat, Fish, and Seafood Consumption by Type in 2014 (Total Volume)

A look at consumption by type offers additional insight on eating habits and their implications for chained foodservice strategy. Fish is the most popular protein region-wide, claiming a 31% share of the total combined consumption of meat, fish and seafood. This fact alone presents a challenge for international operators looking to enter the region, many of which operate concepts that don’t centrally feature seafood dishes. The preference for fish is particularly apparent in many Southeast Asian markets—most of which are considered key long-term growth targets—including Indonesia at 65% of total consumption,  the Philippines at 53%, and Malaysia at 46%.

Even in meat categories however, preferences vary heavily between markets. Malaysian consumers show a strong preference toward chicken over other meats, while China, South Korea, the Philippines, Vietnam, Singapore, and Taiwan all credit pork for at least half of total per capita meat consumption.

But most importantly, preferences are changing

Adding a final and particularly important strategic challenge, these consumption habits are changing quickly, once again on a highly specific and localised level. In China, the popularity of pork is falling amidst a number of pork supplier safety scandals and public health campaigns designed to encourage the consumption of lower fat protein options, even while poultry is facing similar issues due to heightened regulations relating to recent bird flu epidemics. These factors combined have made beef and veal the fastest growing meat category in volume terms in China, growing at a per capita rate of 5% in 2014. Fish consumption is also growing in China as a result of similar health trends, although the premium seafood segment has lost considerable momentum due to the country’s anti-indulgence movement.

Meanwhile in India, total per capita meat consumption remains very low, but it is growing quickly, at 9% volume growth per capita in 2014. The strongest growth was again in beef and veal, due in part to growing from a very small base, but also to more significant changes in consumer lifestyles particularly urban areas. Many young people are opting out of vegetarianism entirely or experimenting with meat consumption when dining out, developing more international culinary preferences with the help of rapidly expanding Western chains.

Offering a counter trend, per capita consumption of fish and seafood of all types is declining in Japan, the result of high prices and some lingering concerns regarding contamination following the 2011 Fukushima disaster. As in India, young consumers are also experimenting more freely with non-traditional cuisines, developing more international palates and stronger preferences for poultry, beef, and veal. Poultry saw the strongest per capita consumption increase in India in 2014, at 4%.

All of these insights highlight the need for localised strategies in Asia Pacific, which may be even more important in this region than in other global markets . Consumer preferences vary significantly across countries, and they are evolving rapidly in unique and specific directions. Operators must take into account not just how consumers currently eat, as well as any dietary limitations that could require significant changes to local menus, but also how consumers may be eating in each of these markets over the long-term. This is compounded by the fact that many of the consumer segments driving these changes are also those that are the heaviest users of chained foodservice, such as higher-income young people in urban areas.

Despite all of this variation however, the one fact that remains consistent across each of these markets, is that competition is growing rapidly, and these more adventurous consumers now have many, many options to choose from for each of their dining occasions.  A thorough understanding of local consumer preferences, at the market, city, and even outlet level, will be more important than ever as each of these markets continues to evolve.

While Latin America has been recording strong growth in the last two years, booking sales are still below pre-pandemic levels, given the size of the losses seen…