Microwaves and food preparation appliances in India experienced volume CAGRs of 9% and 7%, respectively, over 2009-2014. The absolute volume growth rates of both categories over the last five years posted the second largest volume gains in Asia Pacific after China. There are a few reasons why these food-related appliances are becoming popular in India. The main reasons are driven by the influence of Western food, which is the latest trend, persuading Indian consumers to cook Western food at home. Additionally, Indians like to cook from scratch, driving them to purchase combination microwaves and food preparation appliances to cook more easily using raw ingredients. Moreover, efforts by multinationals, which continue to launch new localised products with the latest technology, also boosted the sales of these products to local consumers. Prospect-wise, it is also expected that these food-related appliances will continue to grow over the next five years due to the faster pace of living among Indian consumers, driven by an increase in double-income families in India in addition to stronger demand among Indians to stay healthy by cooking food at home.

numbers with disposable incomes over US$10,000 in 2009-2014, allowing Indian consumers to purchase microwaves and food preparation appliances to make their lives more convenient. Moreover, the influence of Western food, which is becoming popular in India among the middle class in mid-tier cities of India where Western restaurants are not available yet, is also driving the growth of combination microwaves. According to the Economic Times, LG auto-cook microwave ovens, which can cook pasta, macaroni, risotto rice, spaghetti, cottage cheese tortellini and steamed egg with tofu, recorded growth of 15% in 2013, mostly due to demand from smaller towns such as Bhopal, Bhubaneswar, Cuttack, Durgapur, Guwahati, Jaipur or Hubli. It is not only microwaves, the influence of Western food is also driving the increasing sales of food preparation appliances, such as hand-blenders, hand-mixers and juicers. Godrej & Boyce Mfg, Koninklijke Philips NV and Samsung Corp announced strong growth in the sales of their food preparation appliances in 2013 in smaller towns of India where Western cuisine is not easily available.

Volume Sales of Microwaves and Food Preparation Appliances in India, 2009-2014 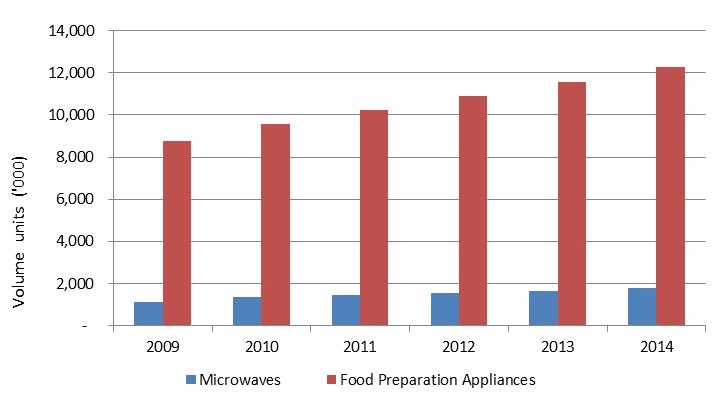 Indian consumers prefer to cook food using fresh raw materials instead of using processed food or frozen food, which also helps drive the volume growth of microwaves and food preparation appliances. This is well highlighted in the market size of frozen food versus fresh food in India from 2009-2014. This answers the questions why Indian consumers prefer combination microwaves over standard microwaves, even though the prices of combination microwaves are slightly more expensive. Moreover, due to the preference for fresh food, Indian people use blenders to blend tomatoes and onions for curry bases and meat marinades, instead of using packaged curry powder, since it is believed that using fresh ingredients will give more fragrance to the food, resulting in a better taste. Moreover, Indians also believe that cooking at home using fresh ingredients is healthier than eating outside the home.

In addition, another important factor making combination microwaves and food preparation appliances more popular is the slightly falling prices of these appliances in the market, thanks to increased competition among market players.

The fact that combination microwaves and food preparation appliances allow consumers to efficiently cook local food at home also makes them popular among Indians. There are quite a few companies continuously localising new microwave products and food preparation appliances. For example, Samsung Corp launched microwaves with a “tandoor technology” button setting, allowing consumers to cook crispy tandoori rotis and naan by using a 200 Celsius temperature setting on their microwaves. Similarly, LG also launched an “Indian bread basket” button setting, allowing consumers to bake many types of local bread by pressing one button, such as naan, roti, kulcha, Thepla, Appam etc. Similarly, Philips introduced food preparation appliances such as mixers and juicers specially for the Indian market, with small amounts exported to other countries. Philips produced grinders with three functions of wet, dry and chutney grinding to suit the Indian cooking style for grinding tough ingredients such as cashew nuts or chopped coconuts for chutneys etc.

It is expected that microwaves and food preparation appliances will continue to see growth in India at volume CAGRs of 9% each over 2014-2019. The main growth driver will be the increased pace of living among Indians, driven by an increased number of double-income families, allowing women to work outside the home instead of being full-time housewives. The busier lifestyles of women will see Indian households go for premium appliances, such as combination microwaves, which can make many types of food by baking, steaming and grilling within a limited amount of time, as well as food preparation appliances, which also help in the cooking of traditional and authentic food at home on an everyday basis.

In terms of manufacturers’ product launches, more health-friendly microwaves are expected to be seen in India that require less oil for cooking and grilling, or that have an anti-bacterial cavity on ceramic or stainless steel interior microwaves that can still maintain cleanliness levels after heavy usage. Additionally, it is also expected that manufacturers will still continue launching microwaves and food preparation appliances that can cook and prepare more authentic local culinary dishes.