US$1.7 trillion; that’s how much the global apparel and footwear market was valued at in 2016. Although this is an impressive performance given economic headwinds and political turmoil, it was also the industry’s weakest growth since the 2008 recession, at 4%. Notably, performance would have been decidedly weaker had it not been for sportswear; for the third year in a row the category recorded an increase of 7%, at fixed US dollar exchange rates. While consumer interest in health and fitness endures, sportswear is racing ahead, causing growth in other categories to look rather tame in comparison. 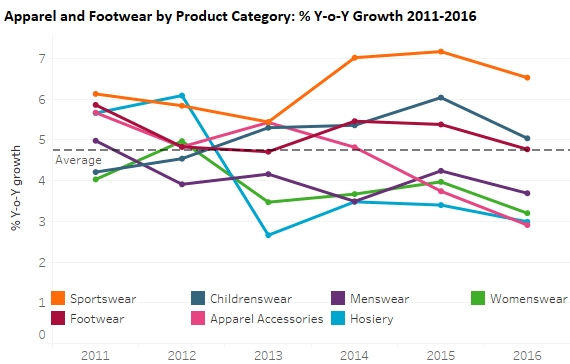 It seems the chatter around the demise of athleisure remains just that. Evolving from a trend that brands have dabbled in with capsule collections into a fully-fledged business opportunity, the continued strength of athleisure is highlighted by the launch of activewear brands such as Ivy Park and Tory Burch. Furthermore, sportswear behemoths Nike and adidas continue to flex their fashion credentials by collaborating with designers such as Riccardo Tisci, Olivier Rousteing and Stella McCartney. With a wider selection and greater availability, sports-inspired products are gaining in popularity among a consumer base that seeks to incorporate sport-styled designs into their everyday wardrobe.

Under Armour’s takes the gold

Star performer Under Armour recorded its 26th consecutive quarter of 20%+ revenue growth in the third quarter of 2016, driven by its rapidly growing direct-to-consumer business, international expansion and progress made in its footwear business. As the company generates global brand awareness and appeals to everyday athletes, it has jumped up the ranks in the global apparel and footwear industry from 12 in 2015 to eight in 2016, surpassing C&A and Old Navy. The launch of its UAS collection clearly illustrates the company’s ability to tap into growing consumer demand for everyday clothing items that feature athletic functionalities. Additionally, the upcoming launch of its innovative Speedform smart shoe collection in 2017, which embodies technology that enables athletes to track their performance and receive feedback on whether they are ready to work out or not, suggests Under Armour will be one to watch in the year ahead.

Childrenswear continues to outshine both menswear and womenswear, benefitting from a mixture of macroeconomic and social trends. The rising middle class in emerging markets, coupled with abolition of the one-child policy in China, is resulting in greater per capita expenditure. Furthermore, the shift towards smaller, later families, with high disposable incomes is resulting in lavish spending on children. The category continues to transition from soft dressing to trend-led products, as fashion plays a bigger role in the buying process, and the frequency at which clothing is purchased continues to rise. Further still, the mini-trend has been benefitting sports players, as parents seek to dress their children in a similar style to their own; as a result, adidas kids moved up to sixth place in childrenswear in 2016, from eighth in 2015.

Menswear grew by 4% in 2016, outpacing womenswear for the second consecutive year. Although womenswear remains the cornerstone of the industry, men’s fashion is picking up the pace, as retailers and brands continue to invest in this growing category; for example, the recent launch of Amazon’s Buttoned Down menswear private label. As male consumers continue to place a greater emphasis on their appearance, men’s fashion is moving to the masses. Social trends across all regions are becoming more accepting now, with softening attitudes towards how men should dress and a wide range of styling options targeting a much broader consumer base.

Apparel and footwear’s positive performance is expected to continue with a CAGR of 2% in constant value terms to 2021. However, the era of robust growth following the recession could be over as we enter a period of continued uncertainty. From Brexit and a Trump presidency to China’s new normal (slower) growth, combined with an increasingly crowded market and consumer priorities shifting towards experience over consumption, 2017 will prove to be a challenging year for many.

Register for our LuxLeisure press briefing on February 9th, 2017.

Personal accessories sales growth slowed in 2022, due to a high inflation environment, continuing COVID-19 restrictions in China, and the impact of the war in…

The luxury industry almost recovered fully to pre-pandemic levels in 2022, as pent-up demand and a return to travel prevailed. The outlook however remains…