Fashions fade but apparel growth is eternal - or so it seems. According to Euromonitor International’s latest research, the global apparel market was valued at US$1.7 trillion in 2012, growing by 5.8% over the year. However, varying degrees of global economic recovery continued to be reflected in apparel’s regional performances. 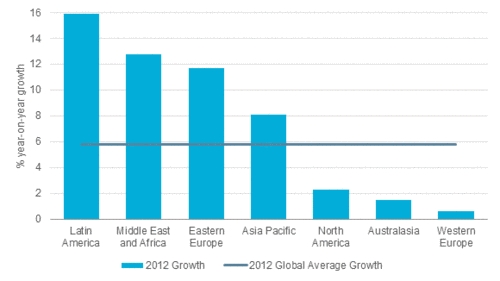 Weak consumer confidence still on trend in the West

If hemlines really did move in tandem with economic growth, as per George Taylor’s ‘Hemline Index’ theory, women’s skirts should be skimming their ankles in Western Europe. Nonetheless, whilst the macroeconomic climate remains plagued by austerity measures and high unemployment, the apparel market offers that small glimmer of hope, growing by 0.6% in 2012.

Still underperforming the global average, the UK was the region’s biggest growth story in 2012, registering a 3.6% rise. Although a triple-dip recession remains on the cards for 2013, the threat has done little to dent apparel retail sales as consumers are happily devouring the plethora of discount and economy brands on the market.

At the other end of the spectrum the peripheral EuroZone economies of Greece and Portugal were the worst performers, declining at double-digit rates in 2012. Whilst the Portuguese market is forecast to improve by 2014, conditions are expected to sour further for Greece, Spain and Italy.

The US remained the world’s largest apparel market, accounting for 21% of global value sales and growing by 2.2% in 2012. Euromonitor International forecasts consumer confidence to recover in the US by late 2013 following rising house prices and further job creation initiatives. The country will remain an integral driver of growth over the next five years, explaining why leading international retailers like Inditex, H&M and Fast Retailing are focused on making an impression in this market.

The BRICs remain all the rage…

The BRIC markets are now stable features of the world’s top 10 largest apparel markets, accounting for 26% of global value sales in 2012, a figure forecast to rise to 32% by 2017.

Despite anxiety about the Chinese economy slowing down, its apparel market continues to steam ahead, set to overtake the US as the world’s largest by 2017.  As international brands from both the mass and luxury ends of the spectrum seek to capitalise on the boom, it will become increasingly necessary to look beyond the saturated metropolises to lower-tier cities for growth.

Following the change in FDI regulations in late 2012, making conditions more favourable for multi-brand retailers, India has seen renewed euphoria in the apparel space, with H&M, Uniqlo and Gap all in talks to enter the market. A booming middle-class and rapid urbanisation have made India’s US$49 billion market ripe for the picking. However, per capita sales of apparel in 2012 were five times lower than in China and 46 times lower than in Norway, thus shedding light on the wide income disparities which prevail in the country.

Russia was the second best performing BRIC market in 2012 after India, growing by 13%. Following the paradigm shift in distribution from informal to organised retail in Russia, store-based expansion is providing plenty of opportunities for growth, with this channel a prime focus for both international and local players.

And finally, in Brazil, access to credit has provided an important boost to consumer expenditure, and as a result apparel growth outperformed national GDP growth in 2012. Looking forward, high-profile sporting events such as the FIFA World Cup in 2014 and the Olympic Games in 2016 are expected to provide a lift to sportswear in particular.

…but time to scout out the next big thing?

However, it may be time to look beyond the well-considered BRIC quartet to other dynamic markets. Ukraine emerged as Eastern Europe’s star performer in 2012, where apparel market value growth was 7.3%, almost twice as much as Russia’s 3.7%.  Venezuela and Argentina witnessed the strongest growth globally over 2007-2012 in value CAGR terms. Another regional star performer was Mexico, which is also expected to be the fifth biggest contributor to absolute growth over 2012-2017 after the BRICs. It has emerged as a key battleground for fast fashion as H&M, Gap and Forever 21 join Zara in strengthening their positions there.