The new edition of Passport Nutrition is out and with that a whole set of exciting data to unveil. This time, not only will we discover the nutrients purchased from Packaged Food (PF) and Soft Drinks (SD), but also Fresh Foods (FF) and Alcoholic Drinks (AD). With malnutrition, and diet-related diseases still on the rise, the world has been busy with public health appeals, calls for action and changes in nutrition regulations. A few to name are the Global NutritionReport 2016 published by the International Food Policy Research Institute (IFPRI), the new Public Health England’s (PHE) Childhood Obesity strategy, or the announcement of the UK soft drinks tax planned to come into play in 2018. In this piece Euromonitor International explores some of the heavily-targeted nutrients in our diets, such as sugar and salt, and some other interesting and surprising findings on protein and alcohol.

Packaged foods are the fuel of today 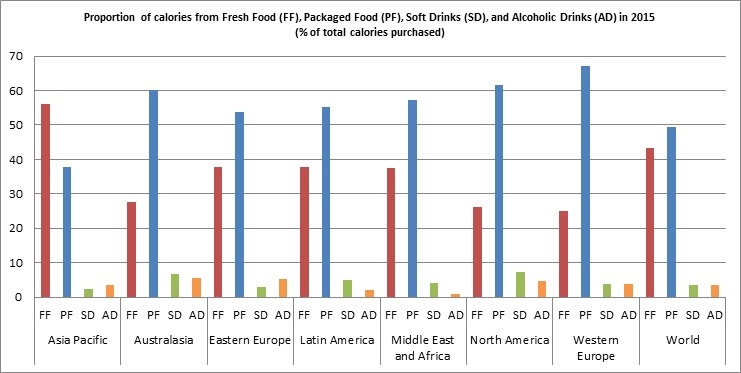 The average daily consumption of calories in the world is 1,401 calories, but the country averages greatly vary, with the lowest seen in India at 762 calories per capita per day to the highest in Belgium at 2,580 calories per capita per day. Interestingly, and similarly, the sources of such calories differ regionally. For example, in the Asia Pacific the greatest source of calories are FF, while PF prevail everywhere else.

This is especially true in areas heavily dependent on PF, such as the majority of Western Europe, the US, Canada and Australasia. The convenience, attractive prices, and availability of PF result in it accounting for the largest share of our stomach. If following a majority of nutrition guidelines it would be recommended that primarily fresh food fuels our bodies, but with this said, packaged food is a major source of protein and fibre globally and above all, plays a crucial role in providing calories to the Developing World. For example, 77% of developing countries tracked by Passport Nutrition obtain more calories from PF than from FF, and 37% of all 54 countries obtain more fibre from PF, than from FF.

Baked goods are a major source of protein

Protein is an essential part of a healthy diet, providing building blocks for muscle and bone or the production of hormones and enzymes. The term ‘protein’ is commonly associated with foods such as meat, fish, eggs or dairy, which indeed are a high source of protein. However, combining the nutritional content of foods with the total volumes consumed paints a different picture of which foods are vital for adequate protein intake. While FF alone contributes 30 grams of protein per capita per day globally, PF tops it up with an additional 16 grams per capita per day, together providing the recommended daily amount for an average sedentary woman. Similarly as with fibre, in 41% of countries PF is a larger source protein than FF, with the three main PF sources of protein being baked goods, dairy, and processed meat and seafood. 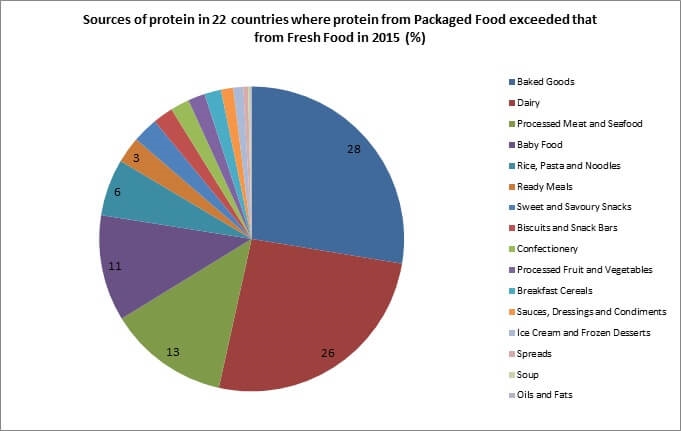 The sources of protein differ greatly regionally. For example, among the four BRIC countries, as well as US, Germany and the UK, India is the only one in which meat is not the primary source of protein. A runner up is dairy which makes the top five in five of the seven aforementioned countries. Interestingly, Baked Goods also find themselves in one of the top protein sources in five of the listed countries. Germany, the US and the UK all share processed meat and seafood as one of their main protein sources, while China and India, both highly rely on vegetables. 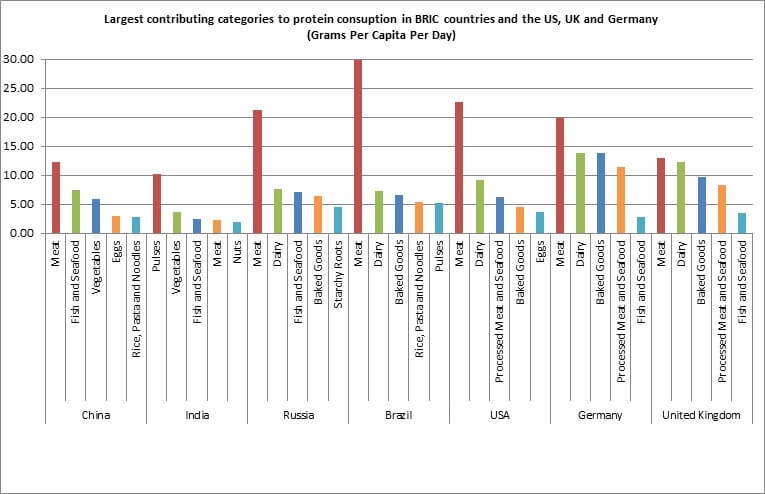 Salt has been perceived as the big bad wolf since the 1960s, when Louis Dahl first showed the positive linear relationship between mean sodium intake and hypertension across five different populations. The research on salt then hit off, each paper providing more evidence than the last that salt is a foe of the human heart. 50 years later and the evidence still stands, though now slightly overshadowed by the effects of the other white substance. Public health campaigns such as the Consensus Action on Salt in the UK, or the American Heart Association’s I Love You Salt, But You’re Breaking My Heart all urge people to minimise the consumption of foods high in salt and the use oftable salt. For example in 2017 the PHE will continue its recommendation of maintaining salt intake below six grams per person per day and recognises that achieving this goal “will necessitate further action across the whole food industry, the government, NGOs and by individuals”. Some of the foods commonly targeted are salted snacks, processed meats, or pickled products. Interestingly our Passport Nutrition data shows that for example in Germany (one of the highest salt consumers in the world) the highest sources of salt per capita per day are bread, only then followed by processed meat and seafood, and in third place, sauces, dressings and condiments. Though it provides only 1.1 grams of salt per 100 grams of bread on average, bread indeed delivers as much as two grams of salt per capita per day to the German diet because of the sheer volume of it consumed. Similarly, in the UK, packaged bread provides approximately 0.8 grams of salt per capita per day, compared to crisps, which only contribute to just 0.1 grams of salt per capita per day. Nevertheless, companies are urged to sign the Salt Reduction 2017 Pledge, part of the PH Responsibility Deal, which promises conforming to salt targets. One of such is achieving a maximum average of 1.75 grams of salt in all cheddar and similar “hard pressed” cheeses in all (100%) products or volume sales within an individual category to meet the targets. Some of the companies that are already on board with this are Mars UK, Tesco PLC, HJ Heinz Co LTD and Jamie Oliver Licencing Limited.

Despite many other factors coming into play when speaking of a healthy diet, the war on sugar has been most prominent in the past couple of years, and with this year’s announcement of the soft drinks tax in the UK, it is certainly does not look like it will end anytime soon. The global purchase of sugar is currently 137 million tonnes per year, and with a CAGR of 2.0%, is expected to rise up to 152 million tonnes over the 2015-2020 forecast period. In per capita terms PF, SD, and FF on average contribute 73 grams of sugar a day, which translates to over 18 teaspoons of sugar. Nevertheless, the top sugar consumers globally far exceed this number. For example, if the top 10 sugar buyers in the world, were to levy every gram of sugar from carbonates alone with just USD0.005 of additional tax, this would generate as much as USD25.4 billion annually, with the most coming from the US at USD13.8 billion, annually.

Though carbonates have firmly maintained their first place in sugar sales among PF and SD since 2014, this year’s addition of FF shows that table sugar is the principal source of sugar consumed in the World. It provides as much as 30 million tonnes of sugar a year in total terms, or four teaspoons of sugar per capita per day on average - more than half of the daily recommended amount in the UK, and over two times the contribution of sugar from carbonates.

Alcohol - we may have other things to worry about

Moving on to the liquid side of things. With our current obesity crisis, a lot of the bad press has been surrounding SD, especially with regards to sugar sweetened beverages. However, with our new, and dare I say most exciting, addition to Passport Nutrition - Alcoholic Drinks, it appears that the problem may be a little more widespread. In Czech Republic, Poland and Germany (the top three AD consumers in terms of calories) energy obtained from alcohol exceeds that from SD by 1.7, 1.6 and 1.4 times, respectively. Unfortunately, the aforementioned are not the only ones with the skewed AD:SD calorie ratio.

Though sugar is indeed strongly related to obesity and diseases, so is alcohol. In addition to that, the evidence for the relationship between alcohol consumption and morbidity is far stronger, and the effects far more detrimental to health. This begs the question, why isn’t alcohol causing as much trouble as sugar?

Food is often targeted for the nutrients it provides per 100g. In some instances however, this proves to be a misguided strategy. Like with salt it is not the high salt foods that prove to be problematic but instead the volumes of foods consumed that contribute to a high salt intake. This can also be true for foods that undermine that contribution to key nutrients, such as the amount of protein we obtain from bread.

Though salt has been in the spotlight for as long as some can remember, it is possible that the way it has been targeted was wrong all along. Instead of the nutrient content of food it is the volume of food consumed that should be considered above all. For the same reason, some foods can be undermined for the importance they play in our diets, such as bread and the protein it provides. In the past couple of years however, salt has become a benchwarmer in all nutrition debates and instead, sugar took centre stage. Interestingly, while the focus on sugar reduction (and with that, calorie reduction) has been primarily put on SD, Passport Nutrition has shown that AD are not far off in terms of the energy they provide, and even overtake SD in some instances. Nutrition can be difficult to understand and therefore difficult to control or standardise. While efforts at improving our diets are being made, it is becoming abundantly clear that there is still a lot to evaluate to make any regulations sensible, but most importantly, effective.

*Throughout the analysis of Passport Nutrition data, intake/consumption of nutrients refers to the amount of nutrients purchased, rather than consumed. Waste is not accounted for.

Ready Meals: How Current Trends will Reshape the Market in the Future

Further strong value growth is expected in 2021 for edible oils in Eastern Europe. However, while growth in 2020 was mainly driven by more home-cooking due to…

Cheese sales, after receiving significant impetus in 2020 due to Coronavirus (COVID-19), continued to grow in real value terms in 2021. Sales remain above…

Retail value sales of cheese slowed markedly in 2021, following the year-earlier growth spike due to Coronavirus (COVID-19), but remained at higher levels than…