In Japan, consumers had long been given limited choice with regard to mobile network operators (MNOs). NTT Docomo, AU and Softbank dominated the telecom networks and mobile phone manufacturers such as Apple, Sony, Sharp and Fujitsu had limited retail channels. The Japanese MNO business has rather been an oligopolistic market, in which the three companies have very similar pricing for cellular voice and data plans.

The government initiated the fair competition within the telecom operators by changing the Telecommunication Business Law partially and making it easier to issue licenses to operators.

Looking a little more closely at the government’s role in terms of promotion of MVNOs (Mobile Virtual Network Operator), we can see that MVNOs do not own the infrastructure, renting the network from the MNOs. Most MVNOs do not provide bricks-and-mortar stores where consumers can communicate with sales staff. A lack of overhead costs for infrastructure help MVNOs to offer cheaper monthly subscriptions of as low as JPY 2,000 for a 5GB data plan, whereas Softbank charges JPY 5,400 for the same data plan.

MVNO’s services, such as Rakuten Mobile, Freetel or IIJmio, allow consumers to use sim-free smartphones. As consumers can choose their favourite smartphones by themselves, this has opened the door to more smartphone manufacturers. Some previously had difficulties entering the Japanese market as, in the pre-MVNO market, all mobile phones sold through MNOs were sim-locked and manufacturers had to comply with the requirements set by MNOs.

How about domestic players?

Apple’s strong dominance of the market leaves fewer opportunities for domestic manufacturers and other foreign manufacturers. In fact, NEC and Panasonic exited the market in 2013 and 2014, respectively.

However, the growing presence of MVNOs brings opportunities for smartphone manufacturers, especially domestic start-ups. These manufacturers instead focus on their product line-ups in the economy and mid-price tiers. Plus One Marketing Ltd was established in October 2012 with its flagship brand Freetel. The company not only sells its own smartphones, but also offers a mobile subscription service as an MVNO. The service is also available at popular Japanese electronics and appliance specialist retailers such as Bic Camera and Yodobashi Camera to secure the distribution network, which is one of the main concerns for start-ups in Japan.

Within its first four years after being established, the company aggressively expanded its overseas operations and now has offices in Mexico, the US, Hong Kong, China, South Korea, Singapore and Dubai. The company announced plans to open offices in Taiwan and Cambodia in 2016.

Another example is UPQ. The company was set up in July 2015 and, as early as September 2015, already had 24 consumer electronics and gadgets launched under the UPQ brand, including smartphones. Its smartphones has been sold at Yodobashi Camera since February this year. The fact that the company’s CEO is a 30-year-old female has also attracted the media’s attention in Japan. 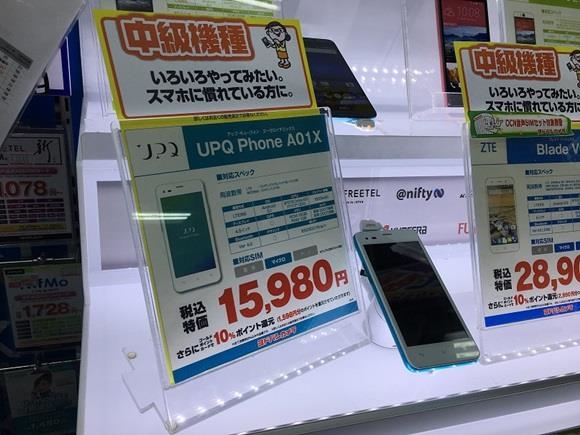 Smartphone manufacturers from China and Taiwan, such as ZTE, Huawei and Asus, also see this market movement as an opportunity to finally penetrate the Japanese market.

Previously in Japan, telco-operated stores were the major distribution channels, which discouraged mid- and entry-level-range smartphones as consumers could obtain most up-to-date, high-end smartphones at cheaper prices thanks to the discounts. With MVNOs, because they do not offer such discounts on devices, entry- to mid-level-range smartphones are preferred. These smartphones do not require the state-of-the-art technologies to differentiate them from other models, opening the door to Chinese and Taiwanese manufacturers, which can leverage their expertise in these segments. Despite the small market shares that the Chinese and Taiwanese manufacturers accounted for in Japan, it is expected that such players will increase their presence in Japan in the coming years. These manufacturers opt for online retailing channels and/or electronics and appliance specialist retailers to sell their products to consumers, instead of the conventional telco stores. 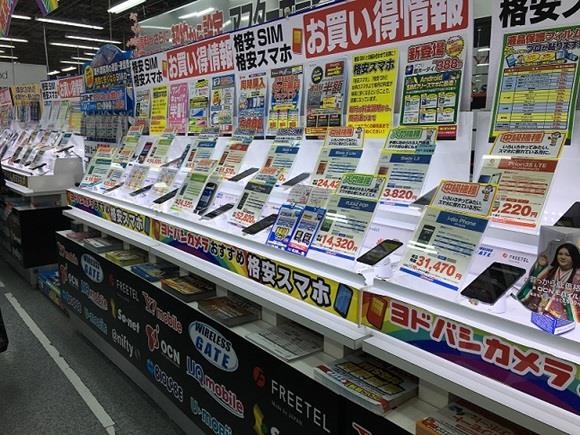 The rise of MVNOs in Japan benefits mid-range smartphone manufacturers, be it domestic, Chinese or Taiwanese mobile phone manufacturers as described above, while changing the rather static, established mobile phone market into a more dynamic one. The change is so drastic that many industry analysts predict Apple is preparing to launch the mid-tier iPhone, just like iPhone 5C, which was not successful when launched back in 2013, because, at that time, most consumers opted for the more premium iPhone 5. Perhaps now is the right time for Apple to relaunch devices in the economy level to capitalise on the emerging demands for cheap smartphones. Should the MVNOs satisfy the high consumer expectations in Japan, the disruptive initiative opens more opportunities for smartphone manufacturers that were previously rejected due to the dominance of the iPhone.