Euromonitor International reports that beer alternatives in 2013 made up 13 billion litres of volume sales and US$58 billion in sales revenue. This is small when compared to the respective standard lager sizes of 182 billion litres and US$583 billion. The forthcoming webinar Beyond Standard Lagers, on 12 November 2014, will highlight the key opportunities that could potentially drive beer alternatives’ growth and show us that size is not only what matters. In value terms, beer alternatives are performing positively and are expected to hold that performance on a par with standard lager for 2014-2018. Euromonitor International’s report Global Beer Opportunities: Beyond Standard Lager also highlights a US$7.8 billion contribution that beer alternatives will add in revenue between 2013 and 2018. 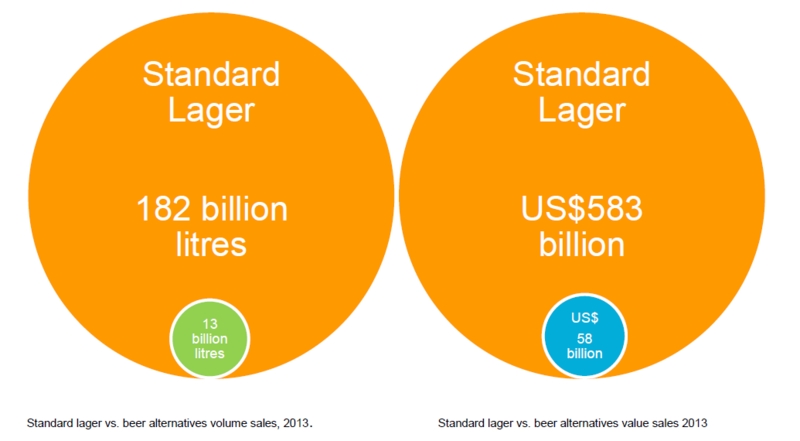 So what are we talking about when speaking of beer alternatives? Basically for this analysis we are including flavoured/mixed lagers, non/low alcoholic drinks, and dark beers such as ale, wheat beer, and sorghum beer, but excluding stouts due to this category’s highly consolidated competitive landscape.

Beer alternatives is potentially an important source of both volume and value growth at a time where standard lager volume sales are stagnant or declining in many core markets.  Also, as brewers scrape the barrel for volume growth they will continue to look towards profile premiumisation to maintain revenue growth. Innovative brewers have already taken steps to counterbalance this decline in volume sales by developing line-extensions in flavoured/mixed lager, as highlighted in Western and Eastern Europe’s flavoured/mixed lager performance relative to standard lager.

Major brewers should also look toward the booming craft beer market and utilise their brand and marketing prowess in developing their own craft brands. Furthermore, there is the long-term strategy of capturing the attention and spending habits of low-income consumers, primarily in emerging markets. As affordable beers are introduced to consumers with low-spending powers and brand loyalty is developed they can capture consumer loyalty early on, then scale up their spending as they up-trade within a brewer’s beer portfolio.

Beer alternatives will offer brewers opportunities for growth, and if brewers take the initiative to get on this bandwagon, or develop it further, then they are due to receive significant returns.