Shifting lifestyles are driving consumers to demand healthier, safer and more ethically conscious products, which has resulted in the strong growth of interest in organic/natural cosmetics. Japan, Asia’s second largest beauty market, is no exception. Whilst the market remains small, there are many brands and products entering this arena, and retailers are actively promoting organic/natural products. This article will address the current status of the Japanese organic/natural market from two perspectives: Changing consumer demands and defining the organic/natural market.

Since the 2011 earthquake and tsunami that severely hit Japan’s Tohoku region, Japanese consumers’ values and preferences have seen significant changes. It is believed that Japanese consumers now place more value on such factors as health, safety and authenticity – more emotional attachments and meaningful experiences, steering away from mass consumption which has become commonplace in the country in past decades. This has naturally resulted in greater concern for safety and quality in ingredients and manufacturing processes across various industries; from food and drinks to cosmetics. For the beauty industry, it accelerated certain trends, including natural/organic and ‘free from’ formulations, reducing or replacing artificial ingredients with natural alternatives. Japanese consumers are increasingly seeing beauty products as part of their wider, more holistic physical and mental well-being. 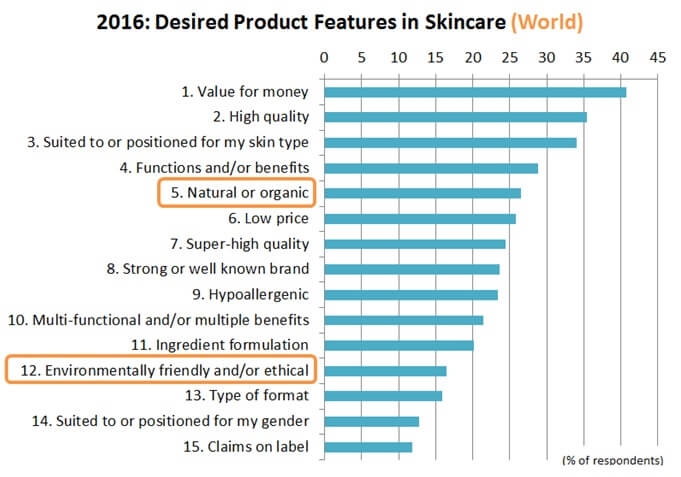 However, despite the strong increase of the market, the desire for organic/natural cosmetics remains unrefined amongst Japanese consumers, leaving the demand criteria for specific organic/naturalproduct attributes low. According to Euromonitor International’s consumer survey on ‘Desired Features in Skincare’ (fig.1), features related to natural/organic products, ‘natural or organic’ and ‘environmentally friendly and/or ethical’ were selected by only 5.4% and 4.5% of respondents, respectively, in Japan. The result clearly shows that Japanese consumers prioritise other functional benefits and cost-efficiency. This is a vivid contrast to the world result, with ‘natural or organic’ ranking fifth with 26.5%, and ‘environmentally friendly and/or ethical’ with 16.4%. These figures indicate that Japanese consumers are not buying into such strict natural/organic claims. Rather, a more general feel around natural/organic brands and products seems to be the key attraction.

2. Defining the organic/natural market in Japan

A major challenge in organic/natural cosmetics is the lack of standardised definitions. As a result, manufacturers and consumers in Japan are using a mixture of different, often incoherent definitions. Firstly, official certification is the narrowest criterion defining the organic beauty market, including only those products which are certified by a recognised industry body. Nevertheless, this criterion is not quite applicable to Japan as Japan’s official organic certificate Yuki JAS only covers food and drinks. This results in the lack of an official organic certificate in the Japanese cosmetics industry. Imported organic certified brands such as Weleda, Neal’s Yard Remedies and Melvita hold a significant presence in the market, whilst small Japanese manufacturers also apply for foreign certificates, including Ecocert, USDA organic and Natrue, amongst others. Overall, the market defined by an official organic certificate is very limited in Japan.

This limitation in official certification results in the emergence of the second criterion: the general ‘natural’ positioning. This includes brands and products positioned as natural, whose formulation contains any level of naturally or botanically derived contents. Despite the ambiguity of this definition and lack of standards, it is the most powerful area and very well received by Japanese consumers. Acceptance of this ambiguity is explainable given natural/organic claims are not among the most prioritised features to Japanese consumers, as seen in the survey result. This wider market of natural cosmetics has a large number of international and domestic players; from those specialised in natural products to a small number of ‘natural’ product lines extended from existing brands. Whilst premium priced brands had dominated, more recently, an increasing number of mass products appeared on the market; recent hits in the mass segment include ‘Luminique Botanical Pure’ shampoo and treatment added to Unilever Japan’s Lux range, and a major brand expansion of ‘Nature&Co’ skin care and hair care by Kose Corp. Manufacturers employ a wide range of natural ingredients, from internationally recognised plants like lavender, rose and tea tree, to local Japanese ingredients like indigenous herbs, rice and yuzu citrus, to name but a few.

3. Outlook of natural/organic beauty in Japan

The natural/organic beauty market is expected to continue steady growth, given the strong consumer awareness of health and beauty in Japan. Meanwhile, its definition will likely remain vague, while the growth of the officially certified organic area is forecast to remain limited. The key opportunity for natural/organic beauty is ingredient innovation. As today’s consumers are constantly looking for something new, introducing new ingredients will be a key driver. There are plenty of opportunities for both traditional and innovative ingredients. More ingredients translated from the food and drinks industry are also expected, including superfoods, fermented ingredients and probiotics. On the other hand, natural/organic beauty brands and products may face intensifying competition from other beauty trends such as derma-cosmetics with stronger scientific backing, due to Japanese consumers’ persistent preference for efficacy over simply being natural/organic.

Key Strategies for Value Creation Through Back to Basics

From Energy Boosting to Full Relaxation: The Strengthening of Oppositional Behaviours and Needs

What Do Consumer Health Industry Professionals Expect in the Next Five Years?

Q4 2021 forecast shows slight downgrade in global beauty, but most of the top 10 beauty markets were upgraded for 2025 projections in Q4 2021. A higher…