In 2014, we saw increasing consolidation in the online travel agency sector, with Expedia and Priceline dominating it thanks to organic growth and acquisitions. Both companies achieved gross bookings of over US$50 billion in the past year. Expedia strengthened its leading position in North America through the Travelocity acquisition and is expected to grow further in this region in 2015 following its Orbitz acquisition, which is likely to be approved by the antitrust authorities. On the other hand, Priceline recorded strong organic growth worldwide, especially thanks to the continuous success of its Booking.com subsidiary.

The dominance of these two companies in the OTA sector could, however, be challenged in the next few years by new emerging players, including technology companies, generalist retailers and Chinese online travel agencies. 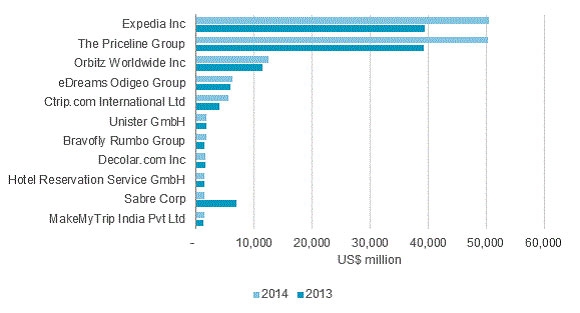 Competition between Expedia and Priceline heats up

A key development in 2014 was the change in the competitive dynamics between the two dominant players in the global online travel agency sector. In 2005, Expedia value sales amounted to US$16 billion vs US$2 billion for Priceline. In the 2005-2013 period value sales of The Priceline Group recorded a much stronger 43% CAGR, which allowed the company to catch up with Expedia, which recorded a 12% CAGR in the same period, with value sales of US$39 billion in 2013.

In 2014, both companies achieved 28% value sales growth, with Priceline recording a slower performance compared to the previous period, partly due to a weaker US dollar, and Expedia recording significantly higher growth. Expedia’s strong performance in 2014 was driven mainly by acquisitions, including Travelocity, the fourth largest OTA in the US, and Wotif, a leading player in Australia, but also by the launch of the Expedia Traveler Preference Program, offering consumers more flexibility in terms of payments. Priceline’s performance, on the other hand, although weaker than in the previous period, was fuelled by still very strong organic growth.

2015 will see acquisitions again playing a key role for Expedia, if the Orbitz deal is approved by the antitrust authorities. Orbitz was the number three OTA globally in 2014, recording 9% value sales growth in 2014 to reach gross bookings of US$12.4 billion. The Priceline Group has also been very active in this field recently, but through acquisitions outside the OTA sector, in particular online restaurant bookings, through the US$2.6 billion acquisition of OpenTable, and B2B services for hotels, through the acquisitions of Buuteeq (now BookingSuite), Hotel Ninjas and PriceMatch. 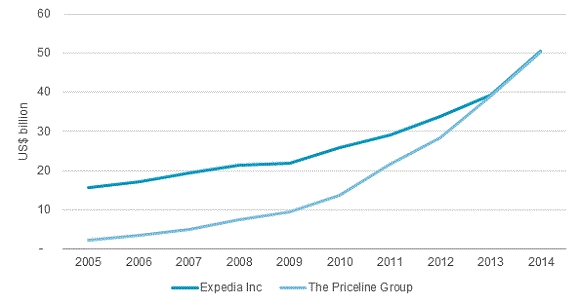 Note: The Priceline Group value sales include Priceline.com Inc value sales for the 2005-2013 period, before the Group was renamed

Consolidation in Europe and North America

However, in Europe, the last three years saw the rise of Bravofly Rumbo Group, renamed lastminute.com Group in May 2015, following its acquisition of the iconic lastminute.com brand, and aiming at challenging the global leaders in terms of technological innovation. Among regional players, the eDreams Odigeo Group is leading in terms of gross bookings, with other significant players including German companies Unister and HRS.

In North America, following the likely acquisition of Orbitz, Expedia would own three of the historic US OTA brands, Expedia itself, Travelocity and Orbitz, with only The Priceline Group able to challenge it in its domestic market, in particular through the growth in the region of its Booking.com brand.

Global players don’t manage to break through in China

However, Expedia and Priceline did not manage to reach significant sales in the booming Chinese market, expected to drive OTA growth in the next few years. Ctrip is the leading online travel intermediary in China with a 30% value sales share. Ctrip’s gross bookings recorded a sharp 39% increase in 2014 to reach US$5.2 billion.

The difficulties for Western companies in succeeding in China were confirmed by the recent sale of Expedia’s majority share in Chinese OTA eLong, with Ctrip acquiring a 37% stake in the company.

Priceline also confirmed the need to approach the Chinese market through local players, with two recent investments in Ctrip, of US$500 million and US$250 million respectively. Cooperation between Ctrip and Priceline in terms of hotel bookings is a strength for both companies, with Ctrip also entering into a cooperation deal with Expedia for flights and package holidays, following the eLong deal.

The rise of new key players in the OTA sector?

If the position of the two dominant OTA players currently appears very solid, significant changes are to be expected in the medium term in such a dynamic area of the market.

In particular new leading global players may emerge in the Chinese market, with Ctrip currently leading it, but being challenged by Baidu’s Qunar and Alibaba’s Alitrip. Moreover, generalist retailers, including Alibaba itself and Amazon, are currently starting to target the lucrative OTA sector.

Another possible development may concern hotels, which are currently suffering the impact on their margins and are looking at possible alternatives, such as creating their own OTAs. For example, in July Accor will launch a new site on which consumers will also be able to book independent hotels.

However, the main future development in the OTA competitive environment may concern technology companies such as Google and TripAdvisor, which may move from a media model to a transactional model in online travel, also as a result of the technological changes driven by the mobile channel, with consumers requiring seamless transactions rather than being redirected to external sites. TripAdvisor has already launched Instant Booking, a functionality that is a hybrid between the OTA and the media model, which, in the future, could also become a possible option for Google. 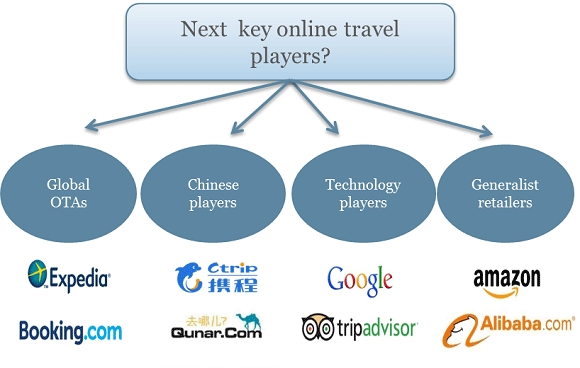