In line with increasing use of smartphones and growing demand for innovative, fast and easy-to-use financial services, traditional banks are facing increasing competition from alternative financial services providers. Due to strong pressure from such players as Paypal, Apple and others, adoption of e-banking solutions will be a prerequisite for banks in order to maintain their market share.

Due to fast increasing possession of smartphones, which grew from 13% of the global population in 2010 to 52% in 2015, and is expected to reach 74% by 2020, mobile services in particular demonstrate great potential. Encouraged by success in emerging markets, companies have started expanding in developed countries.

For example, in 2015, Paypal has been strengthening its position in mobile payments through its Venmo app, the acquisition of Paydiant’s platform and Xoom, and the launch of One Touch payments. As a result, around a quarter of total global payment volume was attributed to mobile payments in 2015. Digital wallets provided by companies like Apple or Google have also been popular among consumers.

Other alternative providers such as payday lenders and peer-to-peer lenders, with some of the largest players such as Funding Circle and Zopa also launching their own mobile apps, were increasingly capturing a greater share of customers. These players managed to provide smaller-scale loans for private and business clients, at the same time as offering simpler and faster issuance of loans.

According to the European Alternative Finance Benchmarking Report, the total value of online alternative financial services market transactions in Europe was worth nearly €3 billion in 2014. Even though it still remained rather small compared to the traditional banks’ transactions, 144% year-on-year growth in 2014 demonstrated the strong potential of these services.

In order to meet the growing consumer demand for online services and remain competitive in the market, traditional banks have also been increasing their spending on computer and related services. The UK and Japan’s monetary intermediation industries allocated around half of total investment costs to computer and related services in 2015. Even though China’s spending on computer services remained the lowest among the leading countries, it saw the highest growth rate with a CAGR of 20% in 2010-2015, indicating a rising focus on e-banking solutions. 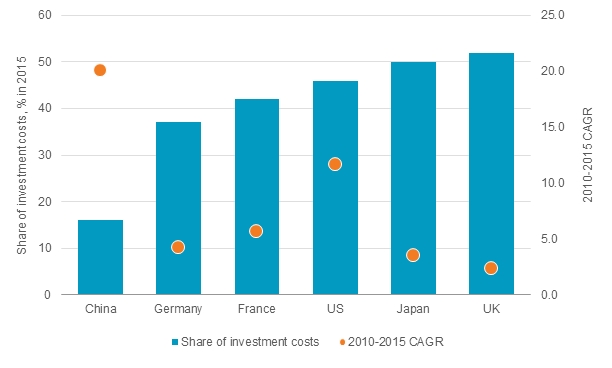 As a result, due to the increasing prevalence of smartphones, investment in e-banking and, particularly, mobile solutions will remain a key focus area for monetary intermediation providers seeking to secure their positions.

The future success of banks is far from certain, however. Even though alternative finance providers, especially in developing countries, are expected to still account for a minor share of the market, double- or even triple-digit growth will allow them to strengthen their positions in digital finance services. The ability to access a greater share of customers, especially in underserved developing countries, more flexible services and lower fees are set to remain among the key competitive advantages of the alternative monetary intermediation services providers.

Global Overview of the Hotel and Restaurant Industry