Findings from the Euromonitor International industry demand model show that price elasticity – the responsiveness of volume consumption to a change in product price – varies significantly across different alcoholic drinks categories. Interestingly, price elasticity for the majority of alcoholic drinks categories is generally higher in the developed markets as opposed to emerging and developing markets.

Note:  Retail sales only (excludes on-trade), fixed exch. rates. The price elasticity in this article refers to a long-run elasticity, meaning a five-year cumulative effect on consumption of 1.0% price change in a given year.

Price Elasticity as an Analytical Measure

Price elasticity at a category level is driven by several factors, including the availability of substitute categories, the degree of necessity, purchase frequency, and whether the category is habit forming. The demand for a product is more elastic to price changes if more close substitutes are available, as people can easily switch from one category to another. On the other hand, goods considered necessities (eg, staple goods), have lower price elasticities, as consumers need to purchase them regardless of the price changes. For habitually demanded products, consumers are relatively less sensitive to changes in  prices too (eg, a consumer might not react to a price change as strongly if he/she is in the habit of consuming lager rather than other beer).

Price elasticity data from Euromonitor International’s industry demand model reveal how changes in category price level can affect category market sizes in volume terms. For instance, as illustrated by figure 1, the price elasticity of dark beer is -1.5, meaning that a 1.0% increase in the price of dark beer would result in a 1.5% decline in volume sales of dark beer. This means a dark beer manufacturer needs to worry more about consumers switching to another category more than a blended Scotch whiskey manufacturer, since blended whiskey is price inelastic at -0.07.

Figure 1 ranks retail alcoholic drinks by price elasticity. The figure refers to long-run global elasticity, averaged across 80 countries. Average price elasticity in alcoholic drinks (ie, the weighted average of price elasticities of all product categories) as a whole is -0.4, meaning that the industry is largely inelastic in terms of price changes. This may be due to consumption at a category level induced by habits, while there is also a natural threshold on consumption for alcoholic beverages, in general. Moreover, greater health concerns among higher socioeconomic groups may also create a limit on the demand for these products leading to lower demand sensitivity to price changes.

Nevertheless, the levels of global price elasticity vary significantly across alcoholic drinks. The most inelastic categories are blended Scotch whiskey (-0.07) and brandy and cognac (-0.12). This can be attributed to the relatively loyal consumer base that prefers these beverages and purchase frequency for these products, as consumers tend to buy more expensive spirits less frequently. Meanwhile, the category which has the highest elasticity among all alcoholic drinks is high strength premixes (-1.82). Consumers of high strength premixes and other ready-to-drink products (RTDs) are primarily young people who, in general, tend to be more price-conscious and thus sensitive to price changes.

Developed vs Developing and Emerging Markets 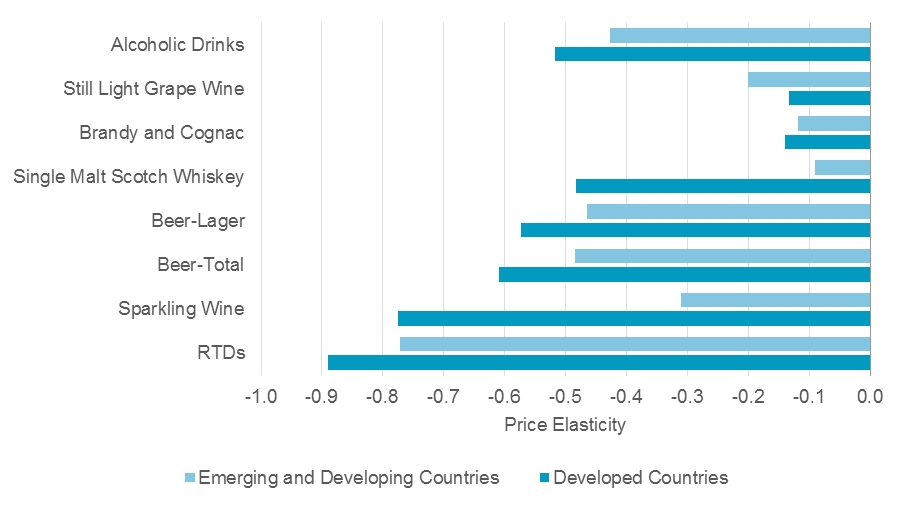 As illustrated in figure 2, most alcoholic drinks have higher price elasticity in developed markets than they do in emerging and developing countries. This may suggest that categories such as single malt Scotch whiskey are still in the early stage of the product lifecycle in emerging markets, while they are beginning to decline in lifecycle in developed markets. As a product category is newly introduced, there are often fewer competitors and price elasticity is relatively low. However, although the price elasticity of a newly-introduced product category may be low, firms often keep price levels attractive to consumers in order to help their products gain a foothold in the market. Meanwhile, as a product category begins a decline in its lifecycle, consumers become more responsive to price changes.

As findings from the Euromonitor International industry demand model show, although alcoholic drinks in general bear low levels of price elasticity, the levels across categories vary significantly. This variation is further enhanced once price elasticities of each category are compared across countries.

The no/low segment achieved booming volume growth on a global level; an intoxicating performance and the exact opposite of the severe declines faced by the…