Our recent webinar: The Global Economy in 2016 explored the outlook for the global economy this year. The global economy looks set to continue to recover only slowly in 2016, with headline growth remaining disappointing. The world faces mounting risks this year: the China slowdown, as well as those of other large emerging markets such as Russia and Brazil; and instability in the Middle East will continue to cloud the horizon. Divergence will remain a key theme for the year. 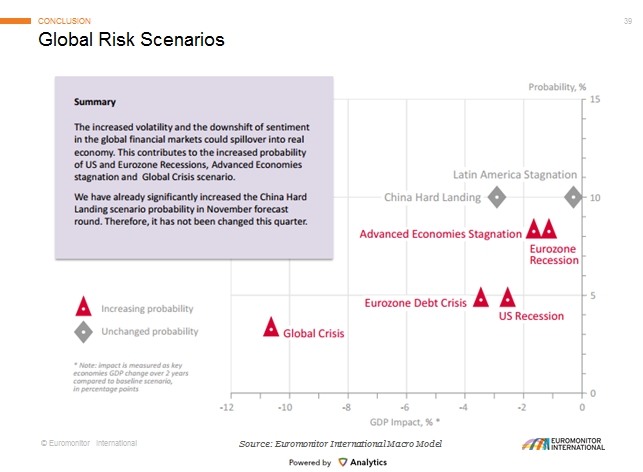 The webinar ended with a thought-provoking Q&A session. Highlights of which are below.

What scenarios do you visualize for the US economy and market reaction, depending on which party wins the upcoming presidential election?­

The outcome of Presidential elections in the USA has historically not had a major impact on the US stock market or short-term economic indicators such as inflation and unemployment. The results will be of more importance for determining the direction of policy into the medium term such as taxes, immigration and trade as well as foreign policy, which will impact global security (the President will elect a chair of the Federal Reserve which decides monetary policy). For example, the Republicans will look to reduce taxes and simplify taxation codes while the Democrats would seek to increase spending and taxes. With regards to trade, Donald Trump has been assertive about suggesting renegotiations of terms of trade or even breaking NAFTA and imposing tariffs on imports. The democrats are opposed to the Trans Pacific Partnership. Another example is in terms of immigration policy where the Republicans may seek to tighten immigration, which would have an impact on the longer term economic outlook as the USA, like other developed countries, is ageing, and immigration is the most obvious way to offset this demographic shift by increasing labour input to maintain productivity and economic growth.

The US elections are taking place against a backdrop of heightened global risk and uncertainty in 2016. With the outcome not to be decided until November, the uncertainty of what could happen is likely to cause more jitters in financial markets by adding to global uncertainty alongside other factors such as the Chinese economic slowdown and the issue of a Brexit in the UK. What is clear though is that as the world’s largest advanced economy, the political direction of the US government matters not just for domestic policy but for all countries with trade or economic linkages to the USA.

Why is the oil price so low?

It boils down to excess supply. There are rising US stockpiles and with sanctions lifted from Iran, this means an increase in supply to the markets. At the same time, the Chinese economic slowdown will have a major impact on weaker demand. There have been talks of a deal between oil producers to try and stabilise prices. A cut in production is unlikely but Saudi Arabia, Russia, Venezuela and Qatar have pledged to freeze production at January levels. It remains to be seen whether this will materialise. 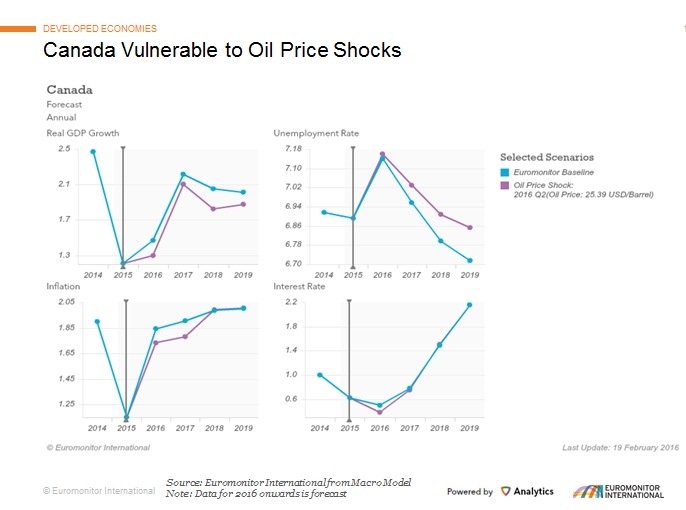 How significant is the oil freeze?

The significance of the deal is in the move towards cooperation, rather than the details of the freeze itself. Neither Saudi Arabia or Russia were likely to increase production from its current levels anyway. Iran is unlikely to agree to freeze its production at current levels. Overall, the challenges are so immense it seems more likely than not that the deal will fail to hold, or at least to progress further to meaningful cuts in production – which Saudi Arabia have already said they are not going to do.

What are the implications of a Brexit, should this happen?

The first thing to point out is that this is an unprecedented situation so nobody really knows exactly what will happen. The main issue would be that it would cause even more uncertainty. The UK is the leading Foreign Direct Investment inflow recipient in Europe but this could change if investors are put off. This would contribute to capital flight and the value of the pound plummeting. All of this will damage economic growth and the years of austerity that trying to reduce the government debt aimed for. The government would try and prioritise trade deals if the outcome was a leave, and the Bank of England will have a contingency plan in place to minimise risk, but the uncertainty is the biggest damaging factor.

What do you think the economic impact of Zika will be on Brazil?

It is still hard to say. It’s likely to have an impact on tourism – although that will be offset potentially by increased visitor numbers - because of the Olympics and because of an increase in domestic tourism. Because of the way it is transmitted, it seems unlikely to have a direct impact on productivity or absenteeism. The next few months are crucial really. It’s come at a very bad time for the economy – the government in its current strained circumstances is struggling to contain the virus and manage the situation. A World Bank report expects it to cost US$310 million in lost GDP – just 0.01% of the economy – should it be handled well. Overall, the economic costs (at the country level) will not be immense. Unfortunately the human cost is another matter.

Will the Olympics have a positive impact on GDP in Brazil?

It’s a similar situation to the World Cup, much of the relevant investment has already been made so the impact on economic growth in 2016 is negligible. On the other hand, the negative effects on the economy are also insignificant, because the costs of staging the event are a drop in the ocean on the country level. It is a boost to tourism – at a time when Brazil needs all the help it can get – but it’s offset to some extent by Zika and also the displacement effect – with tourists not interested in the Olympics electing to go elsewhere. It is also a short-term boost. All-in-all I don’t see a significant impact. It can help in the long-term in building brand Brazil. But it’s hard to quantify the boost from this.

How likely do you think we are to see a China hard landing this year?

The Euromonitor baseline view remains that we will see a continuing slowdown but not a hard landing. We assign an 8-10% probability of a hard landing. 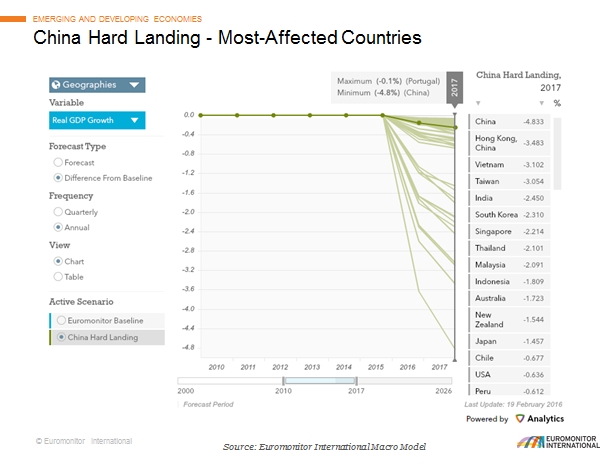 It’s not too late to listen to a recording of the webinar here.