When an economy enters troubled waters, this does not spell bad news for all categories. “Affordable luxury”, for example, tends to perform well in a recessionary environment. This trend became known as the “lipstick effect”, a term coined by Leonard Lauder, Chairman of Estée Lauder, at the beginning of 2001 when he observed that lipstick sales tend to be inversely correlated to economic health. While lipstick sales did not withstand the recent recession, there is some evidence that the “affordable luxury” effect is still present, but manifesting itself in
different categories over time. Nail polish, for instance, could be considered the new “lipstick”, but the “lipstick of choice” varies with time and geography. 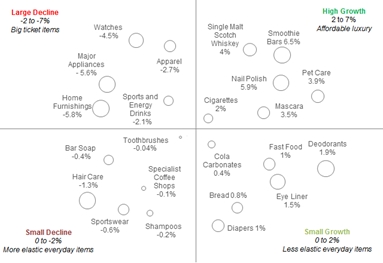 Note: Industry dynamics during the 2008/2009 downturn. Total category growth among 38 developed markets during 2008/2009. The size of the bubble represents the intensity of the effect within each sector. The larger the bubble, the further away the category growth rate is from the start of each sector growth bands.

Did the Lipstick Effect Fail the Test of Time?

Whether by accidental correlation or strong underlying psychological/economic motives, lipstick sales have historically performed well during slowdowns and equally poorly when an economy was strong. Over the last decade, for example, sales of lipstick lagged behind the overall beauty and personal care industry every year, except during the 2000 slowdown, when sales of lipstick boomed. The speculation was that women substitute more expensive purchases like dresses and shoes for lipstick during times of economic distress. The trend whereby
certain categories do well during recessions became known as the ‘lipstick effect’.

The only problem with the lipstick effect was that it looked convincing only until the last recession. In contrast to a strong performance in the early 2000s, lipstick was outperformed by many other cosmetic items and was one of the weakest categories in the entire beauty and personal care industry during the recent recession. In 2009, lipstick sales in the US dropped by almost 7%. Only consumers in the UK maintained their spending on lipstick that year, while sales in Italy, France and Spain declined.

At face value at least, the lipstick theory suffered a setback since sales of lipstick were not strong during the recent slowdown. However, if we consider lipstick as a metaphor, the effect is still present and in good shape. When faced with less favourable economic conditions, consumers tend to save on big-ticket items, such as holidays abroad, but spend more on small "feelgood" products. This trend manifests itself in different categories over time and place. In 2000, it was lipstick, in 2008 - other categories.

Nail polish, for example, could be considered the new "lipstick" of the last recession. In 2008/2009, nail polish was the fastest growing category in the global beauty and personal care industry, and it was austerity-hit Western markets driving growth as cash-strapped women rediscovered nail polish as an affordable fashion accessory and a morale booster. 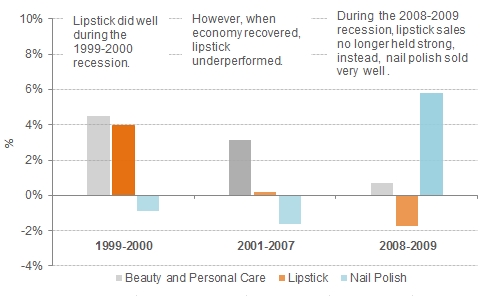 Between 2008 and 2011, nail polish achieved double-digit retail sales growth in the US, Germany, the UK and Italy. Even in recession-hit Spain, demand for nail polish increased slightly, in contrast to the otherwise depressed performance of the colour cosmetics category, as well as the overall retail environment.

Other “Lipstick Effects” in Beauty and Personal Care

Although we may no longer be able to validly refer to the lipstick sales as an economic indicator, a number of new categories which fit the concept of “affordable luxury” have emerged since 2009. It is interesting to look at what these new “lipsticks” might be in different countries and over time.

Mascara in the US: In the US and several EU countries, it was mascara and similar products promising ever thicker, longer lashes which made up for weaknesses elsewhere in cosmetics. Strong mascara sales were seen both during the economic downturn in the early 2000s and during the 2009 recession. There is little doubt that technological innovations within mascara (and their accompanying higher prices) supported value sales growth following the successful 2008 launches from premium players Estée Lauder and Lancôme.

Hair colourants in the UK: In the UK, the recent economic downturn coincided with a renaissance of the hair colourants category. Following the start of the recession, supermarket sales of home hair colour kits rose sharply, with Tesco reporting a 200% leap for its £0.99 permanent hair colour line in November 2008, while overall hair colourant sales were up 9% in 2008/2009. Italians, on the other hand, increased their spending on shampoos and conditioners, giving a boost to the wider hair care category. 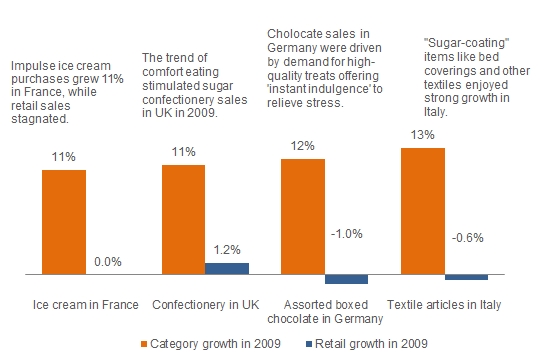 Ice cream in France: Ice cream topped the list of impulse and indulgence products in France, registering an 11% increase in value sales in 2009, driven by the nation’s appetite for single portion dairy ice cream. Meanwhile, cupcakes and individually packaged cakes were star performers in the UK bakery category.

Confectionery in the UK: The evidence extends to overall chocolate and sugar confectionery, which continued to experience growth in the UK throughout the recession. The concepts of “comfort food” and “permissible treat” were taken on board by manufacturers which focused on traditional as well as more premium lines, helping to drive value sales. Total sales grew by 3% in 2009, fuelled by an 11% value increase in sugar confectionery, arguably because these so-called childhood foods provide much-needed nostalgia and remind recession-weary consumers of better times.

Chocolate in Germany: Germans consumers, on the other hand, increased their demand for premium chocolate in 2009, with many opting for high-quality brands to relieve stress rather than consuming cheaper “second-rate” products. Product lines with alcoholic fillings are estimated to have grown by around 12% in retail value terms over 2009. The resilience of premium-oriented confectionery – particularly chocolate – during the current economic downturn in markets as diverse as the US, Germany and China certainly lends credence to the overall “affordable luxury” theory.

Textiles in Italy: Developments in the textile market also offer an interesting example of public reactions towards the economic crisis. In Italy, sales of ready-made textile goods peaked in 2009, in contrast to falling demand for most other manufacturing goods. It seems that while Italian consumers were under pressure to reduce their spending on most other goods and services, they turned their attention to textile furnishings and other “quick fix” products which could prettify their homes at minimal expense. Indeed, ‘sugar-coating’ items like bed coverings, decorative cushions, curtains and kitchen linens were cheap when compared to the price of a family holiday, which many Italians had to sacrifice as budgets were squeezed.

While the lipstick effect may no longer be applicable to lipstick itself, the concept remains and is still going strong, thriving on the back of consumers’ desire to splash out on small things so as to make life “worth living”. While the manner and form of the lipstick effect is different in individual countries and categories over time, in the end the one thing that all of these recession-proof items have in common is that they offer instant gratification and are generally affordable. In this context, however, “affordable” does not necessarily mean “cheap” or “the cheapest”, but rather the opposite, as illustrated by Europe’s growing demand for fine wines and champagnes, premium ice cream and other premium products during the 2008/2009 downturn.

The lipstick effect theory is therefore all about shopper defined affordability, offering lucrative opportunities for manufacturers and distributors. It would appear that instead of focusing on the cheapest possible products to boost sales, the winning retail strategy during a recession in developed markets is to find the right answer to the question “what can the shopper afford right now?”.

Where Consumers Shop for Tissue and Hygiene

The tissue and hygiene industry saw growth contract slightly during 2021 after the pandemic disruption of 2020. However, there is still much to be had in terms…