Euromonitor International’s 2017 edition reveals a strong beauty and personal care industry in 2016, with a respectable 5% growth. For the second consecutive year, the premium segment outperformed its mass counterpart, with nearly 6% growth.

At county level, Brazil and Russia have restored their place among the promising growth markets. While the economic situation improved in Brazil, brand owners also resorted to measures such as frugal innovation and promotional offers to keep demand intact. Meanwhile, Russia was boosted by local players, such as Natura Siberica and Faberlic, and higher spending in Russian high streets, as consumers shunned shopping destinations such as Paris and London, and spent less in travel retail. These dynamics helped Brazil and Russia post growths of 4.8% and 9.8%, respectively.

India and Indonesia continued to drive growth in 2016, at 9.2% and 10.6%, while their market size nearly doubled over 2011-2016 to reach US$12 billion and US$4.6 billion, respectively. Projections point to similar dynamics, with India expected to suffer in the short-term from demonetisation, but is expected to recover quickly as retailers facilitate cashless transactions.

At 7.2% growth, it was a stellar year for colour cosmetics, further fortifying over the 6% growth in 2015. Dynamic brands fuelled category growth, including Nyx, Urban Decay and Kiko Milano, as well as a plethora of niche labels, such as Milk Makeup and Too Faced. Nyx and Kiko Milano grew via retail network expansion, supported by in-store digital technology to enhance the consumer experience. Winning brands are typically leveraging digital platforms to communicate their message. For example, Glossier was born out of a beauty blog by utilising crowd-sourced insights, while Milk Makeup’s growth was partly motivated by a strong online following, as well as unique attributes, such as its weightless formula for a brush-free application, and an eco-conscious and hipster positioning.

Skin care slowed marginally to under 5%, largely the outcome of a slowdown in China. Other key categories, notably, fragrances and hair care, posted stronger growth in 2016 versus 2015, helped by improving disposable incomes in emerging markets.

BPC forecasts points to an increasingly premium future over 2016-2021, with a CAGR of 3.6%, compared to 2.4% in the mass segment. China and the US are predicted to contribute 54% of the US$20.3billion in absolute gains in premium beauty over the forecast period, with China expected to catch up with the US in terms of contribution to absolute gains, underpinning the potency of the Chinese market.

This is more evident in discretionary categories, as greater value is delivered by premium brands. With premium colour cosmetics anticipated to grow at a CAGR of 4.2% over 2016-2021 globally, the total category has the potential to overtake hair care as the second largest category beyond this forecast period, as the gap in value sales narrows.

While global mass colour cosmetics and skin care remain stronger than the premium segment, predicted to addUS$6 billion and US$12 billion in absolute gains, respectively, the key regions of North America and Western Europe reveal a healthier outlook for the premium segment. Potentially, mass skin care and colour cosmetics may experience the same fate as mass fragrances, which is in decline in North America (-2.5% CAGR over 2016-2021), while in Western Europe, projections show a flat 0.1% CAGR over the same period. These regions are now premium-dominated in fragrances. The premiumisation trend, prevalent in discretionary categories, is pushing mass brands in this direction, merely to survive in the marketplace, as more consumers seek the quality and product results associated with premium formulations. 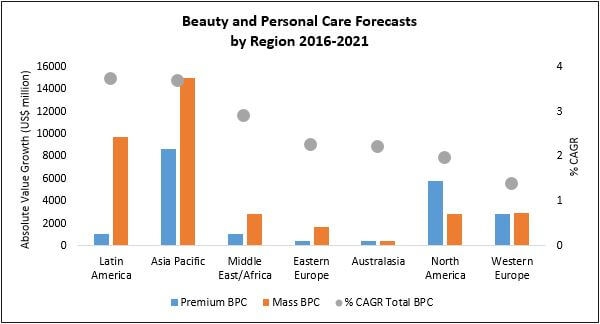 Asia Pacific leads premium BPC forecasts over 2016-2021, expected to generate US$6.6 billion in absolute gains. However, this amounts to just under half of the mass segment equivalent. Premium segment prospects are explained by the large demographic, as more consumers in East Asia trade up from the mass segment. Luxury is increasingly becoming more accessible in the form of smaller packs, but also, regional players such as AmorePacific making inroads in several Asian markets. For example, in Indonesia, its premium Sulwhasoo brand reached over US$11 million in 2016 since its 2013 debut, while in China it grew exponentially over 2011-2016, reaching US$82.5million, doubling sales over 2015 alone. The company also launched the luxury brand Hera at upscale department stores in Beijing.

Nevertheless, North America conquers in per capita expenditure in premium beauty, which is expected to top US$90 by 2021. The region’s premium beauty forecast predicts absolute gains over 2016-2021 amount to US$5.8 billion, double the prospects in mass beauty, This makes North America ripe for the high-end prestige market such as personalised beauty, and upmarket small-batch niche labels. As premium beauty becomes deeply embedded, the competitive challenge lies not in the product quality, but in making it distinct and as individualised as possible.

Evolving consumer lifestyles are key drivers behind the vigorous premium beauty. These dynamics stem from cross-industry megatrends, observed also in foods and apparel. Purchasing decisions are increasingly motivated by the quest for healthy living and “green” consumption, where the “natural” is wider-encompassing to include products with eco-credentials, sustainable sourcing and clean labels. Moreover, as consumers seek “experiences” over “possessions”, they also consume less, and reallocate income to premium products, largely in view that these would better fulfil their needs and priorities. In turn, this is driving customisation and personalised beauty, reinforced by smart technology that is catapulting forward the desired lifestyles.

The pursuit of prevention and wellbeing is driving innovation beyond cosmetics. For example, Burt’s Bees entered beauty-from-within with protein shakes, while AB-Crew exploited the surfacing of athleisure beauty, to target active consumers with muscle-enhancing and recovery topical solutions.

Moreover, the resilient dermocosmetics segment is boosting brands, such as Rodan + Fields and La Roche-Posay, both of which grew in double-digits in 2016, but also channelling innovation in this direction. For example, Exuviance boasts make-up that leverages its dermocosmetic heritage, to complement its skin care solutions. The make-up artist brand, Bobbi Brown, made the bold move to launch Bobbi Brown Remedies with pharma-inspired solutions and packaging.

More novel for the beauty industry are products formulated with live probiotics that claim to act on skin care issues by helping to balance the skin’s bacterial flora. Among the pioneers are Mother Dirt and YUN Probiotherapy, both of which take dermocosmetics to a new level.

Premiumisation is driving standards across all levels in the beauty industry. As standards improve, luxury is becoming more accessible to ordinary consumers, notably millennials, who tend to be at the forefront of lifestyle changes. For wealthier consumers, this is more pronounced through personalised services, such as smart diagnostics. Whichever group consumers fall into, brand owners must embrace the fact that the purchasing process is increasingly knowledge-based and consumers more capable of distinguishing science from marketing. Going forward, the use of digital technology will become more sophisticated as augmented reality and artificial intelligence become mainstream. The end result, personalisation for all?

Born between 1995 and 2009, Generation Z (Gen Z) is coming of age alongside significant changes in post-pandemic economy, giving rise to the Gen Z beauty…

After the dip in sales seen in Western Europe in 2020, when Coronavirus (COVID-19) hit the region, skin care was back to recording positive growth in real value…

The skin care market’s performance in Latin America held up well during the pandemic, with positive growth being recorded in real value sales terms in both 2020…