Obesity is a growing concern in many nations in the Middle East, especially in the area surrounding the Persian Gulf. In the countries of the Gulf Cooperation Council (GCC) nearly a third of adults are now obese and diabetes and other weight-related diseases are becoming serious public health issues. While there are a number of reasons for this, including sedentary lifestyles and heavy consumption of fried and fatty foods (fast food spending grew more in the United Arab Emirates from 2010-2015 than in any other country), beverages play a large role. According to Euromonitor Nutrition data, in 2015 Saudi Arabians received 35% of their sugar from soft drinks, a remarkably high amount. That is nearly double the global average and even above the comparable figure for carbonates-loving countries like the US (29%) or Mexico (32%). 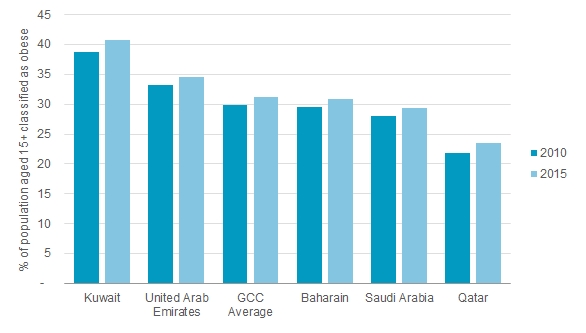 Consumption of sugary soft drinks is high in the region, and will in all likelihood continue to grow for the foreseeable future. However, obesity in the Gulf is a ticking time bomb, and governments are starting to move to avert the looming public health crisis. This could potentially make these countries some of the most promising markets for health-positioned drinks in the world, but it will also pose a threat to sugar-heavy categories that have found the Gulf States to be a rare bright spot at a time of widespread anti-sugar feeling. Saudi Arabia, the largest market in the GCC by far, recently announced plans to put a tax in place on sugary beverages in its wide-reaching Saudi Vision 2030. Faced with a very similar combination of falling government revenues and rising obesity rates, other governments in the region will likely soon follow. Even in the absence of government action though, the Gulf is changing, and the beverage industry will need to be prepared.

The GCC is dominated by Saudi Arabia

The GCC represents a US$8.4 billion soft drinks market. Of that, 68% of sales occur in Saudi Arabia, whose US$5.8 billion market is the largest in the Middle East and Africa as a whole, despite ranking only 14th in population . The United Arab Emirates is second at US$ 2.0 billion, with the small but wealthy markets of Bahrain, Kuwait, Oman, and Qatar combining for another US$840 million between them. Soft drinks sales in the GCC are highly concentrated in a few categories . About 40% of total sales are from carbonates, thanks largely to Saudi Arabia’s high consumption rate of 88 litres per capita. Juice is the second largest component at US$2.3 billion, driven by the UAE (which ranks first globally in per capita consumption). Meanwhile, RTD tea, RTD coffee, and sports drinks have very little penetration and combine for only US$64 million in sales across the whole GCC. 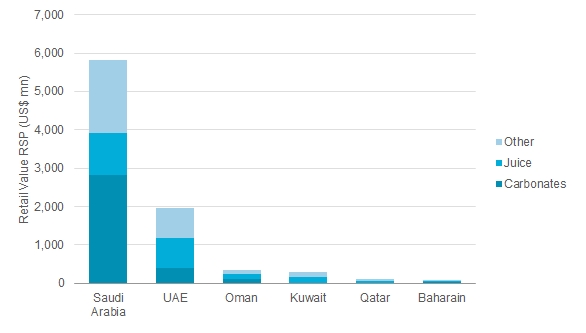 Obesity in the Gulf goes beyond beverages

In addition to high consumption of sugary beverages, a number of other factors have combined to produce the region’s high obesity rates. The first is the harsh climate, which discourages outdoor sports and even walking around outside. Another is the economic structure of many of the countries. Oil wealth has enabled most of the native population to work at physically undemanding jobs, while foreigners dominate industries like construction. A final issue is diet, as the traditional cuisine of these countries tends to be high in calories and fat, even before elements of Western culture like fast food started making inroads.

Much of this is starting to change, with implications for the beverage industry. While the climate is certainly not going to cool down anytime soon, hikes in utility prices that are being seen across the GCC mean that continuously running air conditioners, as is typically done now, is going to become more expensive. This may increase demand for refreshing beverages in warmer homes and offices. Feelings about exercise are also shifting in the face of some grim public health realities; the International Diabetes Federation warns that half of all Saudi adults could be diabetic by 2030 at current rates. To combat this threat, governments are promoting active lifestyles and sporting infrastructure is being built across the region. Saudi Arabia is now the world’s fastest-growing market for outdoor and sports-oriented toys and games, with a 13% CAGR expected during the forecast period. Consumers will need beverages to accompany this increased level of physical activity, which may improve prospects for bottled water and the miniscule regional sports drinks category.

Also of significance is the large divergence in obesity rates between men and women. Cultural expectations that women will largely stay at home have made the problem of sedentary lifestyles even more acute. Labour force participation for women in the GCC as a whole was just 38% in 2015, compared to 79% for men. Even in the home, hiring domestic help from the region’s large migrant populations is quite common, reducing the number of calories the region’s women burn from activities like housework. These trends have combined to create a considerably gendered difference in the obesity rate. In the GCC overall, there is a 16 percentage point gap in obesity rates between women and men (41% vs 25%). In Kuwait, where the trend is most noticeable, over half of all adult women are now considered to be obese. Beverages looking to position themselves as health drinks will need to keep this in mind, and create products that can appeal to women.

Obesity rates by gender in the Middle East and North Africa 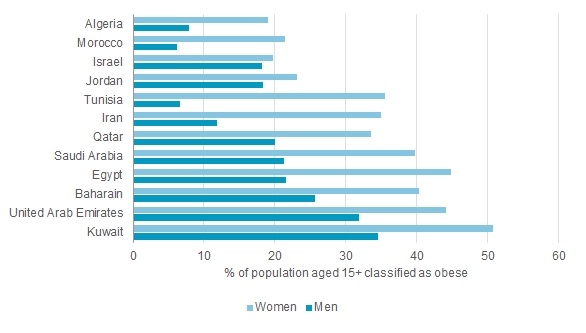 Diet sodas and tea are in a position to benefit

One category that could benefit from all of this is low-calorie carbonates. Consumers in the Middle East do not share the scepticism of their counterparts elsewhere towards artificial sweeteners, and the region is one of the few places in the world in which the category is still growing. The forecast regional CAGR of 5% in reduced sugar carbonates is remarkably high at a time when the global market is expected to shrink. The GCC countries will by themselves account for US$44 million in absolute growth during the forecast period, which is more than is expected from the entire Asia Pacific region. 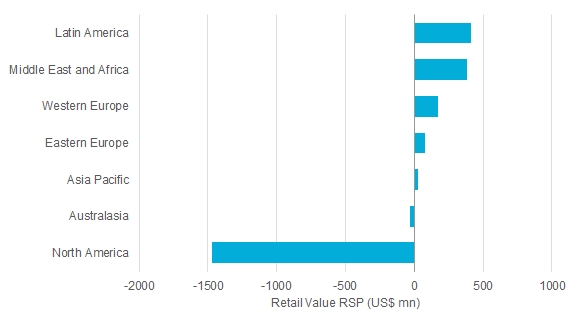 Another increasingly popular low-sugar alternative is tea. The value of the Saudi tea market is growing at 5% annually and should be a US$ 441 million category by 2022, with green tea in particular showing strong growth to reach US$176. Women have been driving this growth, showing that marketing aimed at women can be a winning strategy for health-positioned beverages in the region.

Bottled water is also an area to keep an eye on. It is growing everywhere in the GCC, although the UAE’s 9% annual grow rate is particularly high. The category is well-positioned to take advantage of the growth of fitness trends in the area, as tap water is usually avoided and sports drinks have very little penetration. New, on-the-go pack types are already being rolled out to appeal to the nascent Gulf fitness market. Low-sodium products are also an area in which producers are focusing on. The heavy reliance on desalinisation in the area makes having a low sodium content in unusually important to Gulf consumers.

Are sugar taxes coming in the future?

The sugar tax debate was once rather muted in the Gulf region. This is a reflection of the governing style of the Gulf States, which have historically financed themselves primarily from oil revenues and collected little in the way of taxes from their populace. Saudi Arabia, for example, has a tax rate of 14.6%, and the UAE’s is only slightly higher at 14.8%, making them the second- and third-least taxed countries in the world. However, this is starting to change under the pressure of years of low oil prices. The Saudi Government introduced once-unthinkable austerity measures in 2016, including wage freezes for public sector workers and reductions in fuel subsidies. The UAE has raised public utility rates and Kuwait cut government spending by 17% to fix its first deficit in decades.

As the price of oil has dropped, GCC governments have needed to borrow to meet their budget obligations 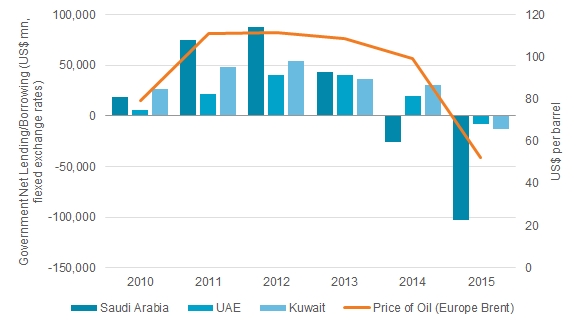 This budgetary pressure may tempt more local governments into considering sugar taxes. Saudi Arabia has already announced it will add new taxes on sugared beverages along with a host of other non-essential goods like tobacco in its new Saudi Vision 2030 plan. The World Health Organization’s recent endorsement of a 20% tax rate on sugar-added beverages provides more justification for the remaining governments to consider some of their own. It should not take much for these cash-strapped governments with serious obesity problems to hit upon sugar taxes as a solution.

Regardless of how widespread these taxes become though, growth in high-sugar products in the GCC is clearly not going to be as easy as it once was. Changing conditions in the Gulf, ranging from higher air conditioning costs to the increasing popularity of sports, means things are going to be different, which will require companies with interests in the region to adapt.