Euromonitor International’s previous article discussed why scenario analysis is a key for businesses to prepare and future-proof their strategies in the face of potential macroeconomic shocks, especially when evaluating business decisions such as the scale of entry or investment in a certain market.

In the second part of this blog series, we will illustrate how to do this using the example of Brazil as a case study, one of the most volatile emerging markets.

Brazil has been recovering from a deep recession that led to GDP contracting by 3.8% in 2015 and by 3.6% in 2016. Economic output has started increasing recently, and growth is forecast at 0.7% in 2017, followed by 2.1% in 2018 and a gradual increase to 2.5% afterwards. Inflation has declined, and is forecast at 3.5% for 2017, subsequently rising towards 4%. The central bank has responded with aggressive interest rate cuts, with a complete monetary policy normalisation expected by the beginning of 2018.

However, there are still large downside risks to this forecast. While the new government is planning to implement significant labour market and pension reforms, these efforts face significant obstacles in Congress. As a result, long-term stabilisation of government debt levels is still in doubt. Political uncertainty has diminished, with reforms-oriented President Michel Temer surviving a motion to put him on trial for corruption. However, the government continues to face low approval ratings, and new corruption charges could still cause Temer to resign. Business and consumer confidence are still significantly below their long-term historical average, and the recovery remains fragile.

In such a volatile environment, it is important for businesses to identify the key macro risks to the baseline forecast and the impact of those risks on their markets. Below, we plot the estimated probabilities for various macroeconomic scenarios 1-year-on in our macro model dashboard against their year 3-year cumulative impact on the GDP level. We also perform a more formal risk ranking by calculating the expected scenario impact (the scenario probability times the GDP impact). 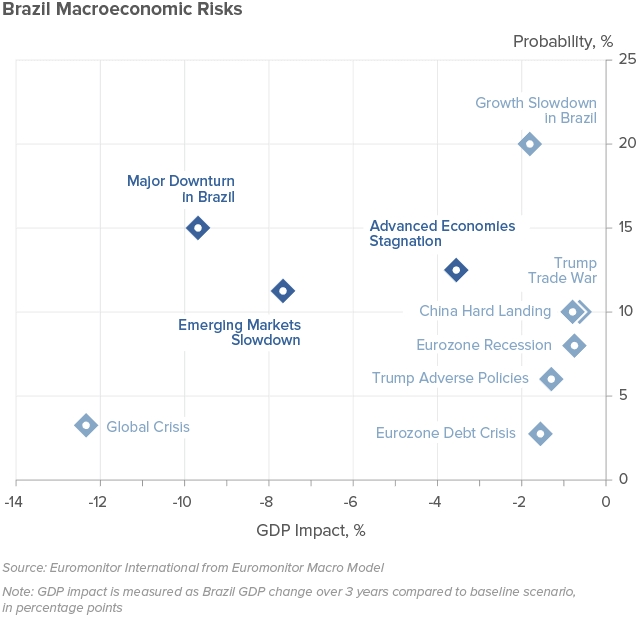 This analysis reveals two global scenarios and one country-specific scenario as the top 3 macro risks to the Brazil outlook:

A major downturn in Brazil

A failure to pass pension reforms and consolidate government finances, and a further decline in the already low popularity of the current government, triggers a large negative shock to private sector sentiment. Foreign investors become more pessimistic and uncertain about the country’s long-term outlook, demanding a higher country risk premium and leading to large capital outflows. The Brazilian Real depreciates by more than 30% in 2018.

While exports benefit, the devaluation raises the costs of servicing of foreign currency denominated debt and increases the cost of imports, hurting consumers and domestic producers. Annual inflation rises above 6% in 2018-2019, leading the central bank to raise interest rates above 16% in mid-2018.

Higher costs of borrowing and foreign debt repayment, combined with lower private sector confidence, cause a sharp contraction in domestic consumption and investment. GDP declines by 2.8% in 2018 and by 1.6% in 2019, before a recovery starts in the first quarter of 2020.

A downward revision in expected potential growth, higher interest rates in advanced economies and a deceleration in global trade cause a slowdown in emerging markets. Foreign capital outflows increase, leading to higher borrowing rates and significant exchange rate devaluations. The stronger than expected slowdown of China‘s economy reduces commodity prices, worsening the trade balance of big commodity exporters such as Brazil. Lower private sector confidence and tighter credit conditions reduce consumer spending and investment throughout emerging markets. GDP in Brazil declines by 1% in 2018 and by 0.8% in 2019, followed by a weak recovery from 2020.

Labour productivity growth in advanced economies such as the US, the Eurozone and Japan, is much lower than previously expected. Annual GDP growth in those economies declines by 1.2-1.5% below the baseline forecast over 2018-2022. The stagnation in advanced economies is accompanied by greater private sector pessimism and rising investor risk aversion. This leads to an increase in the required rates of return on emerging market debt. In combination with lower external demand and lower global commodity prices, the higher costs of borrowing reduce economic growth in emerging markets. While the Brazilian recovery continues in this scenario, it is much slower than expected, with annual GDP growth of 0.6-0.7% in 2018-2019 (down from 2.1-2.2% in the baseline forecast).

Using these macro scenarios, we can now examine the impact on more specific target markets, using the Industry Forecast Model. For example, suppose we are reviewing market projections for various packaged food categories in Brazil. Taking the highest impact major downturn scenario, we see that baby food, breakfast cereals, ice cream and ready meals are the most vulnerable categories. In contrast, sales of rice or pasta are much less affected by the downturn.

Impact of Major Downturn in Brazil on Packaged Food Industry

Foods such as rice, pasta or noodles are base products for most households and are relatively insensitive to income changes. To the degree households want to cut spending in a recession, these foods are also a cheaper source of calories.

In contrast, ready meals are more recession-sensitive, since lower incomes stimulate substitution towards more home cooking (in part using staples such as rice or pasta). Under the major downturn scenario real (inflation-adjusted) growth in the category would decline from more than 4% annually in 2018-2019 to 2.7% in 2018 and 2.4% in 2019, only returning above 4% in 2021. Taking this higher sensitivity to macro shocks into account suggests more caution in investing in this category, despite the high growth rate in the baseline forecast.

While baseline macroeconomic forecasts are likely to be wrong, market analysts can minimise surprises by examining the impact of downside risks. Systematic incorporation of alternative macroeconomic scenarios as part of market research leads to more robust strategy planning, and a better response to negative shocks.

To learn more about how Euromonitor International’s economic analytics tools to help your business strategy, read our report ‘Why Economic Analytics Matter for Business Strategy’.