Skating Towards Recovery: The NHL’s Plan to Boost Commercial Performance in the 2021/22 season

The National Hockey League (NHL), like many other top sports leagues, is eager to rebound as quickly as possible from the disruption caused by the pandemic. The 2021/22 season sees the league return to its 82 game regular season, where the majority of teams plan to welcome fans back to arenas operating at full capacity.

To gauge how quickly any league or team can recover, it’s important to understand both the strengths and weaknesses of the sports property and the strategies being implemented that will drive commercial revenues in the short to mid-term.

Does the NHL have all the ingredients needed to rebound quickly?

The NHL is ranked third in the US and fourth globally in Euromonitor’s 2021 League Index, boasting a loyal fanbase, storied heritage and strong US economic background, helping the league to persevere. But despite ranking highly in the League Index, the NHL has some comparative weaknesses, lagging considerably behind other major leagues when it comes to social media following. Before COVID-19 hit, however, live attendances were on an incline and the league had one of the top sell-out ratios globally.

However, games with fans in attendance dropped from around 80% in 2019/20 to 30% in 2020/21. How quickly attendances return to arenas, and how well the league can engage its fanbase online will undoubtedly impact the pace of recovery the league can expect. 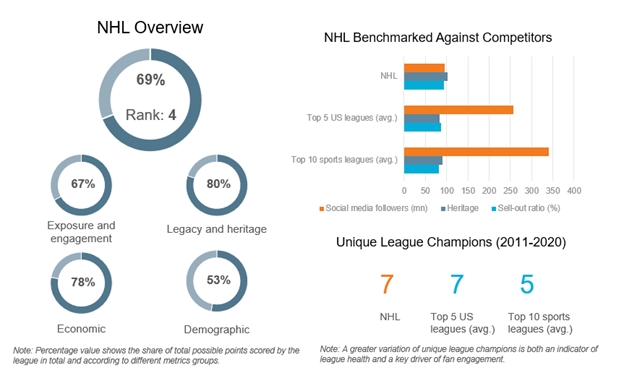 One tried and tested method of boosting commercial revenues the NHL is keen to pursue is the creation of new sponsorship categories. The league announced the introduction of helmet sponsorships starting in the 2020/21 season followed by jersey sponsorships starting in 2022/23. This will help cushion the impact to league and team revenue whilst simultaneously creating new opportunities for sponsors across different sectors that have also been impacted by the pandemic. Nearly 70% of helmet sponsorships were allocated to existing - mainly arena naming - partners to compensate for lost visibility during the games played without live spectators in attendance. While over 50% of teams for the 2021/22 season already have different sponsors for their helmets and arena naming rights - illustrating a quickly maturing category - partnerships from the finance and insurance sector continue to be heavily relied upon by the league. The average helmet deal per team is reported by some sources to range from USD0.5 million in 2020/2021 to as high as USD3 million for the upcoming season. Jersey sponsorships are expected to generate even higher returns, providing additional TV exposure and are potentially worth twice as much as helmet sponsorships. 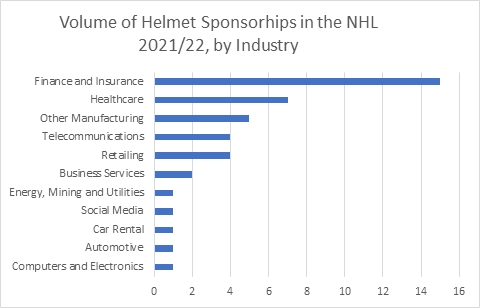 Partnerships with betting companies are expected to play an important role in growing the league’s sponsorship revenue and enhancing its digital reach and fan engagement, both domestically and abroad. The league and half of its teams already have numerous sports betting sponsors. The Washington Capitals recently signed NHL’s jersey sponsorship deal with Caesars Entertainment after the league granted permission allowing betting sponsors to occupy helmets and jerseys from the 2022/23 season. The league’s sports betting sponsors will also be able to benefit from the NHL’s player and puck tracking system deployed across arenas in the 2021/22 season, and its subsequent data, leading to in-play betting and overall consumption.

New sponsorship categories, a growing array of industries joining the current league partners and ever-increasing deal value will all play a pivotal role en route to recovery for the league

Besides sponsorship, the league continues to look to international markets as a growth generator. The league is increasing its commitment to hosting international games, events and grassroot programs overseas, including Western European countries, alongside Russia and Mexico. The 2022 Beijing Olympics will be another avenue from which the league can showcase the game and its best players.

This feeds into the league’s long-term strategy of developing hockey in China and reaping commercial benefits for both the NHL and companies associated with the league.

As all major leagues are in a similar position, trying to recover and grow their business globally, competition in a post pandemic world will be fierce. The League Index shows that the NHL has the ingredients to compete with its peers. New sponsorship categories and growing presence of betting partners will undoubtedly strengthen the league’s commercial outlook. Beyond this, the NHL will be eager to leverage its physical and digital assets to more effectively penetrate international markets, putting the league in a strong position from which to ensure sustainable growth.

A Glimpse into the Sports Metaverse

Technology companies have often utilised the captive audiences of sports as a sandbox, illustration and advertisement from which to promote emerging…

The Travel Quarterly Statement for Q1 2022 reflects the fact that cautious optimism for recovery has been tempered by war in Ukraine, leading to a humanitarian…