The World Economic Forum has released its annual Global Agenda report which pinpoints the top ten trends for 2014, as identified in a survey of more than 1,500 global experts across business, government, academia and civil society. The common thread that runs between the threats identified as the three most important, is social tension. Social tension has also been a key theme in 2013 erupting in countries as diverse as Brazil, Turkey and Sweden. Its implications depend on the severity of the unrest, the structure of the economy, the causes and the reaction of the government.

Rather than leave a legacy of democracy, the Arab Spring has left in its wake political instability, social tension and a sectarian divide. Uncertainty reigns, and with uncertainty tends to come economic stagnation.  Research from the Pew Research Centre found that 88% of Lebanese, 81% of Tunisians and 62% of Egyptians were dissatisfied with the situation in their country.  Egypt and Lebanon are forecast to see economic growth in 2014 well below the average for the Middle East and North Africa, although Tunisia is expected to see stronger growth – driven by an upturn in government expenditure and smaller gains in private consumption.

Income Inequality on the Rise

Widening income inequality has been identified as the second most important trend globally in 2014. In 2014, income inequality will widen in 50 of 85 countries for which Euromonitor has data. Although Latin American countries dominate, South Africa is set to top the ranking once again with a Gini index of 0.636. In 2014, 18% of households will have an income over US$25,000, whilst at the same time almost 40% will earn less than US$5,000. Rising inequality is also an issue facing advanced economies and it was reported as the number one challenge by North Americans in the Global Agenda survey.

Income inequality creates social tension and can stifle economic growth – because of the lack of a middle class. In economic terms, middle class consumers are important as they can be a major contributor to economic development through spending and future human capital (as they often spend on education). This in turn will help transition countries up the value added chain and in some cases influence domestic policy. Government revenues in developing countries benefit from a new class of consumers who have moved from the informal to the formal economy and contribute to taxation. An increase in the middle class, therefore, can have a direct reinforcing effect on economic growth, creating a virtuous circle.

The World’s Most Unequal Countries in 2014 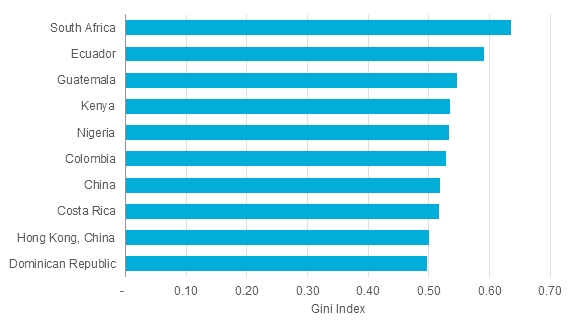 Note: Data are forecast and refer to a ranking of 85 economies. The Gini index refers to a standard economic measure of income inequality, based on a Lorenz Curve. A society that scores 0 on the Gini index has perfect equality, where every inhabitant has the same income. The higher the number over 0, the higher the inequality.

Unemployment, or more specifically persistent structural unemployment, was identified as the third most important trend. Unemployment is predicted to be 10% or higher in 29 out of 85 countries for which we have forecasts in 2014. Although we expect it to rise in 2014 in comparatively few countries – 18 in total – the problem of long-term unemployment remains significant.

Unemployment has been a weak link in the recovery in many developed economies and youth unemployment is a particular problem in many countries. The significance should not be underestimated - research from the International Labour Organization has found that it takes, on average, over 11 years for youth unemployment to return to pre-recession levels. Youth unemployment can do lasting damage. Risks include long-term difficulty finding employment and persistent pay differentials with continuously employed peers. This means that even when the economy recovers, a significant portion of young people will be left unemployed for many more years, and that even those that find work are likely to suffer lower incomes throughout their working life.

All in all, 2014 looks likely to be a better year economically than 2013 has been, but “better” must be kept in perspective. It’s also clear that risks for many countries are on the downside. High unemployment, government and private debt and stagnant incomes are still a problem in many developed countries and the weak external environment, concerns over the Fed’s tapering and inflation are a problem in emerging markets.