Sweden is the number one market for SodaStream, with over one million carbonated water makers sold, in a country of about 4.5 million households. At the Beverage Digest Wall Street Smarts conference in New York City on 15 June 2015, SodaStream CEO Daniel Birnbaum stated that SodaStream is in 20% of Swedish households, with more shelf space than coffee in stores. The company was able to succeed in Sweden because of the country’s strong environmental standards, health concerns about plastic bottles, and a taste for sparkling water. However, what works in Sweden is unlikely to work elsewhere, including the company’s focus market of the US. Swedish consumers are uniquely concerned with preserving the environment. Sweden represents a best-case scenario for SodaStream. In contrast, Americans are not as interested in environmental issues and drink less carbonated water than the Swedes. By switching its marketing approach to focus on health conscious consumers, SodaStream may be able to grow in the US.

Sweden was called “the most sustainable country in the world” in a 2013 report by sustainability investment firm Robecosam. The government seeks to minimise use of fossil fuels while its citizens are avid recyclers. According to data from Avfall Sverige, over 99% of all household waste in Sweden was recycled in 2012, up from 38% in 1975. In contrast, Germany’s household recycling rate was 65% and France’s was 39%, according to Eurostat.  The availability of recycling stations close to residential areas as well as the promotion of “Zero Waste” by the Swedish Waste Management and Recycling Association has encouraged recycling. Even clothing retailer H&M accepts used clothing at its stores, for which customers get rewarded with rebate coupons. In this ultra-environmentally aware country, SodaStream machines which use reusable bottles and refillable CO2 canisters have found an eager consumer base.

Health concerns about plastic bottle usage have also helped SodaStream grow in Sweden. Swedes have an increased concern that plastic particles are stored in the body from consuming beverages from plastic bottles. Many Swedes are opting to purchase metal and other “plastic particle-free” bottles to fill with tap water instead of buying bottled water products. Using the SodaStream allows Swedes to bring their own carbonated tap water with them to the gym, work, school, etc. in their BPA (bisphenol A)-free bottles.

Hoping to replicate its success in Sweden, SodaStream has thus far focused its marketing efforts in the US on environmental sustainability, yet with a new focus on replacing carbonated soft drinks, not bottled water. The company created a television commercial for the February 2013 Super Bowl, where after the delivery men for Coke and Pepsi arrive at a supermarket, the soda bottles explode. The commercial ends by saying that SodaStream could have saved “500 million bottles on game day alone”. Another TV commercial in the February 2014 Super Bowl featured actress Scarlett Johannson and the slogan, “Sorry, Coke and Pepsi.” Though the company advertised itself as a green alternative to Coke and Pepsi, cola drinkers did not like the taste of SodaStream’s cola flavour. The taste of cola carbonates, unlike sparkling water, cannot be replicated exactly. 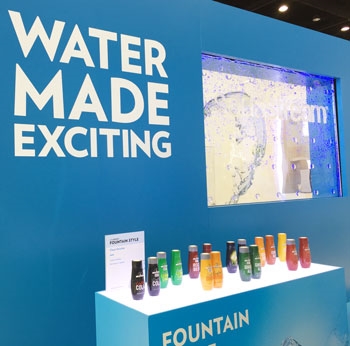 SodaStream also failed to adjust to growing health and wellness concerns, leading many American consumers to move away from carbonated sodas to other beverages. Carbonated bottled water, functional bottled water, and RTD teas have all grown between 2009-2014 in the US, while carbonates are in decline. One of the biggest beneficiaries has been Sparkling Ice, a functional bottled water that is zero-calorie, carbonated, fruit-flavoured, vitamin-enriched, and sweetened with sucralose. Talking Rain’s Sparkling Ice grew off-trade value sales from US$17 million in 2010 to US$381 million in 2014 aided by its bright, colorful bottles and its “The Bold Side of Water” tagline. It now appears that SodaStream may be borrowing from Sparkling Ice’s successful strategy of marketing a sweetened, bubbly beverage as a guilt-free alternative to carbonated sodas by introducing zero-calorie fruit-flavoured concentrates with the “Water Made Exciting” tagline 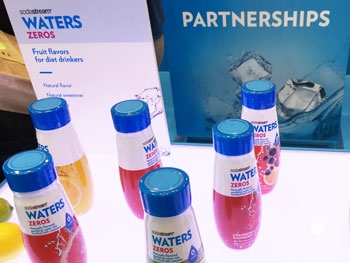 SodaStream’s upcoming launch of new SodaStream WATERS flavours liquid concentrates in August 2015 is part of the company’s new strategy. The new concentrates include Zeros (full fruit flavours) and Essence (with a hint of flavour) that contain zero calories and are sweetened with stevia. By using stevia instead of the more common sucralose or aspartame, SodaStream seeks to appeal to calorie-conscious consumers who want to avoid artificial sweeteners. At the Beverage Digest conference, Birnbaum said, “We’re shifting from soda strategy to sparkling water strategy. We made a strategic error when we positioned ourselves as alternatives to Coke and Pepsi.” After stating in an October 2014 investor presentation that it would change its positioning from “home soda maker” to a “sparkling water maker”, the company launched the SodaStream Power Sparkling Water Maker that offers three fizz levels to control the carbonation level at the March 2015 International Home + Housewares Show . Instead of positioning itself as an environmentally-friendly way to make carbonated sodas, the company is repositioning itself as a fun way to drink more water. Birnbaum said about 60% of SodaStream users in the US use it to make sparkling water.

With its new sparkling water strategy, SodaStream is tightening its focus on health conscious ‘innovators” who want to craft their own beverage instead of trying to target the masses. Having exited mass merchandisers Walmart and Kmart and mid-market department stores Sears and Macy’s in 2014 and 2015, the company is now focusing on higher-end specialty retail, including specialty grocery and health and wellness retailers such as Whole Foods Market. In a market such as the US where bottled waters and carbonates are very low-priced, it is unlikely that a carbonated beverage machine, whether from SodaStream or Keurig (the Keurig Kold), can become a mass market item. These carbonated beverage makers are likely to remain niche products popular with a small segment of the population. Affluent, health aware consumers in the US want to eat and drink healthier products and can be reached with proper marketing. This small group of shoppers purchased 851,000 Vitamix blenders in the US in 2014, up from 318,000 in 2010 according to Euromonitor International’s Consumer Appliances database. Vitamix is riding the fresh juice and smoothie movement, aided by chefs and bloggers, even though the Vitamix blenders cost over US$400.  It is possible that SodaStream can carve out a space for itself in the US and other markets by targeting health conscious consumers who want to drink more water, avoid artificial sweeteners such as aspartame and sucralose, and improve their health.

Six ways Chinese brands can move up the value chain

Following significant growth in small appliance sales, driven by home seclusion during the pandemic, major appliance players are looking to capitalise on…