One of the advantages of Euromonitor International’s new Soft Drinks Forecast Model is the ability to identify unexpected markets of opportunity. This is increasingly important for the drinks industry, as the large emerging markets of China and Brazil have slowed significantly in 2015, impacting the global outlook for retail beverages.

Europe has hardly been a byword for opportunity in retail consumer goods. Over the past five years, soft drinks in Western Europe have stagnated. Pockets of tepid volumes in Northern Europe, where economies have returned to modest, but generally positive growth, have been largely offset by ongoing weakness in Southern European markets. Given this recent pattern, it may be a surprise to some that Spain is one of the markets identified as having a brighter mid-term outlook for non-alcoholic drinks and one of the most improved quarterly forecasts in our model. However, scenario-based analysis included in the forecast model also reveals the disproportionate impact that future Eurozone shocks could have on the Spanish beverages industry.

The chart below shows Euromonitor International’s Passport baseline forecast for retail beverages volumes in Spain, published in January 2014, along with expected upper and lower bounds of this projection. In black, a restated quarterly forecast for soft drinks, published this November, suggests some interesting developments. In percentage terms, expected baseline off-trade soft drinks growth of 1% over the 2014-2019 period has been revised up to 4% growth for the same period. Estimated off-trade soft drinks volumes for the entire EU in 2019 have been upgraded by 669 million litres; Spain alone accounts for 349 million litres of this improvement. 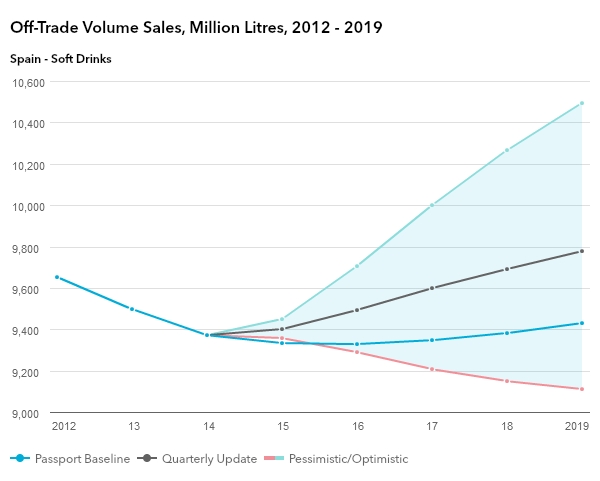 What is driving this improved outlook? The Spanish economy has grown for nine consecutive quarters, with higher GDP leading to increased household spending on beverages and other consumer goods. A hotter than expected summer in 2015 also lifted the soft drinks industry. 1% off-trade volume growth is now expected in 2016 in contrast to the flat performance initially forecast in January, with improved GDP leading to a lift in sales.

Bottled water is the big winner in the revised forecast projection

Within Spanish soft drinks, bottled water is positioned to benefit the most from the more positive outlook. 1% growth is forecast for off-trade volume growth in Spanish bottled water. Of the 349 million litre improvement in soft drinks sales in Spain suggested by the model’s quarterly update, 70% of this volume will emerge from bottled water alone. The category has benefitted from consumers seeking affordable, low-priced beverages and also healthier alternatives (including plain still water and flavoured waters from companies including Font Vella and Lanjaron.) Over the past five years, strong growth brands included Beyoza, a still bottled water brand owned by local company Calidad Pascual. The company managed to increase its share in 2014. The Bezoya brand is perceived as a healthier product because of its mineral content, with marketing aimed at elderly people and small children. Low-priced, but branded single-serve bottled water brands that can trade on the quality of sourcing and mineral content are leading the beverages recovery in Spain.

While branded volume growth in the category is encouraging, it remains to be seen whether this can lift the bottled water category in value terms as well. Added-value features such as convenient designs and new sizes, as well as formats especially created for children, are likely to be key areas for the development of bottled water across the forecast period. As low- or zero-calorie beverages, waters are uniquely positioned to capitalise on the soft drivers impacting the industry, mainly increasing consumer desire for healthier drink alternatives. Consumer demand for environmentally sustainable packaged goods is another potential soft driver for a growing segment of consumers. In 2015, Agua Mineral San Benedetto released the Font Natura Ecogreen 1-litre PET bottle, a format which uses up to 50% of recycled PET material.

What if the Eurozone slips back into crisis in 2016?

While the Spanish recovery is promising, particularly in the context of its weaker European neighbours, it is important to keep one eye on downside risk. While the consumer economy of Spain has certainly benefitted from increasing household income over the last two years, high rates of unemployment, lingering concerns about high levels of public debt and an impending general election cloud the long-term picture. The new soft drinks model allows us to hypothesize how big, unexpected economic shocks in Spain or the wider European region could impact retail consumption of beverages.

As recently as this summer, political instability in Greece and popular uprising against the terms of government-negotiated settlements with external creditors raised the real possibility of Greece’s exit from the Eurozone. While this eventuality did not materialise, there have been those who forecasted a wider European debt crisis spreading to other highly indebted European states at various times over the last three years. These fears have abated for the time being, after an IMF/European Central Bank relief package, extended to Spain in 2012, public spending cuts and other domestic reform packages.

While unlikely at the present time, Euromonitor International’s Soft Drinks Forecast Model allows us to speculate on the potential impact of a second euro debt crisis on the Spanish beverages market. The macro scenario outlined below assumes renewed tensions in Italian and Spanish sovereign debt markets from Q2 2016 that cause turmoil in financial markets, a collapse in business and consumer confidence across the Eurozone and beyond, and Greece exiting the euro. The scenario posits a 1.0% decline in Spanish GDP in 2016 and a steep 2.8% drop in 2017, mirroring a severe downturn across the region. 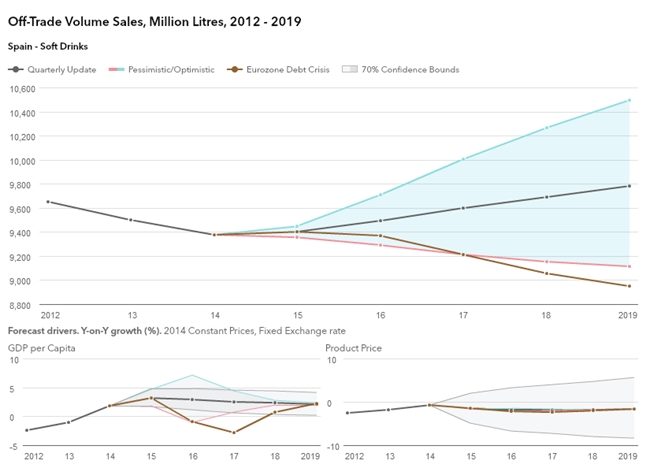 According to our model, this bleak and thankfully unlikely scenario would see Spanish soft drinks squander all of the gains in 2016, contracting severely in 2017 and dropping below nine billion litres of total consumption in 2019, the lowest retail volume figure since 2004.

The incumbent Rajoy government faces re-election this month, with opposition groups urging a change of economic policy. While Spain remains a post-crisis European success story, our model demonstrates that the growth of its economy will have a positive impact on retail sales of beverages, particularly bottled water, with GDP per capita the leading driver of growth in our demand model. However, adjusting these variables according to worst case scenarios demonstrates the lingering risk of investing in this tentative recovery. Spain is a potential bright spot of the European recovery, but for the time being, it will remain at the forefront of any sudden downturn in regional economic fortunes, with consequences for retail packaged beverages.