Over the past few years, the trends within pet food ingredients have been in direct tension with sustainability. With the idea that pets need to eat meat – which they would eat in the wild - having been widely spread among pet owners, there has been an increasing demand for meat-rich pet food formulations marketed as ancestral diets, which has significantly increased the carbon footprint of the industry. In addition, the relatively sustainable practice of creating pet food from discarded by-products from meat processing has fallen out of favour, as owners demand human-grade meat as the main ingredient.

At the same time, however, pet owners are now becoming increasingly concerned about the future of the planet and they are making sustainable changes to their daily routines. Data from Euromonitor International’s Global Lifestyles Survey show that these environmental concerns are significantly more pronounced among pet owners than non-pet owners, as nearly 70% of global owners report that they are “worried about climate change” and are “trying to have a positive impact on the environment through my everyday actions”, signalling a potential growth opportunity for pet food produced from sustainable ingredients. 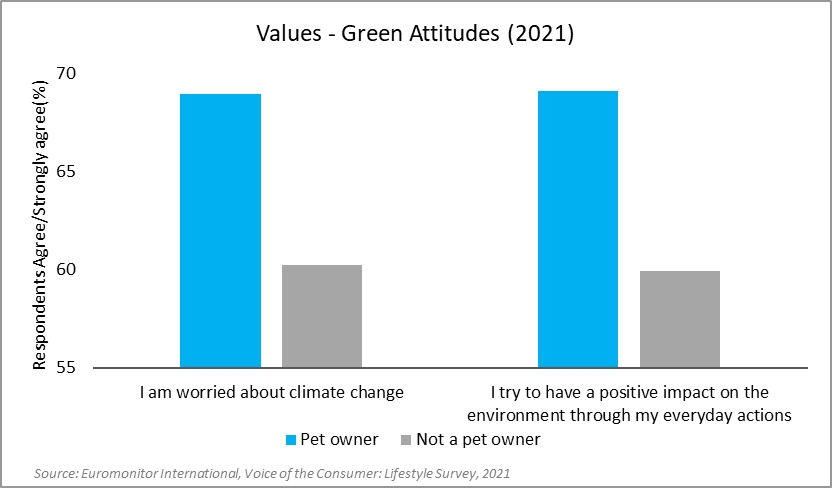 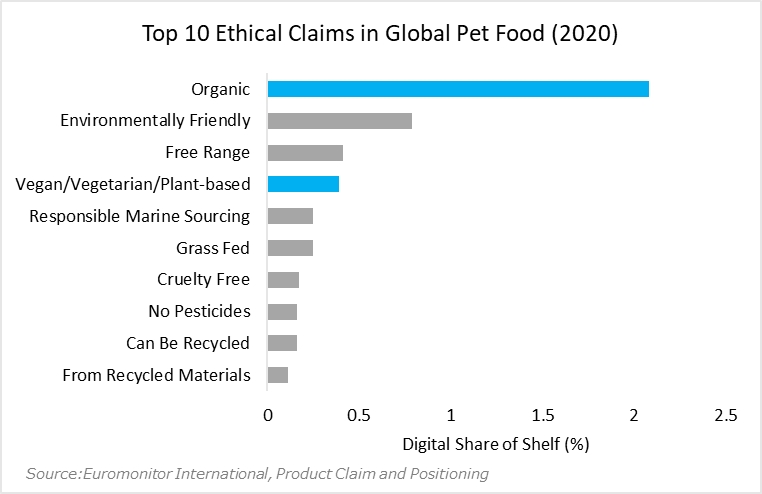 Organic is already the most common product claim in pet food, accounting for 2% of the total pet food SKU tracked by Euromonitor International’s Product Claims Positioning system, but organic pet food is expected to grow further as organic packaged food, the market for pet owners themselves, has been constantly growing over the past few years. Although 2021 saw a slowdown in growth as a backlash of the sharp uptake in 2020 driven by the pandemic, demand for organic packaged food is likely to stabilise again over the forecast period, supported by the increasing number of health-conscious consumers and those who have greater awareness of environmental issues, which will cascade into pet food market as well. Moreover, organic products are becoming increasingly accessible. Small, premium brands currently dominate the market, but in response to the growing demand, the industry’s biggest players, including Nestlé Purina are also launching organic product lines, with the latter introducing “Beyond Organic”. The number of organic private label products such as Zooplus BIO, is also increasing, which is likely to further fuel demand for organic pet food. 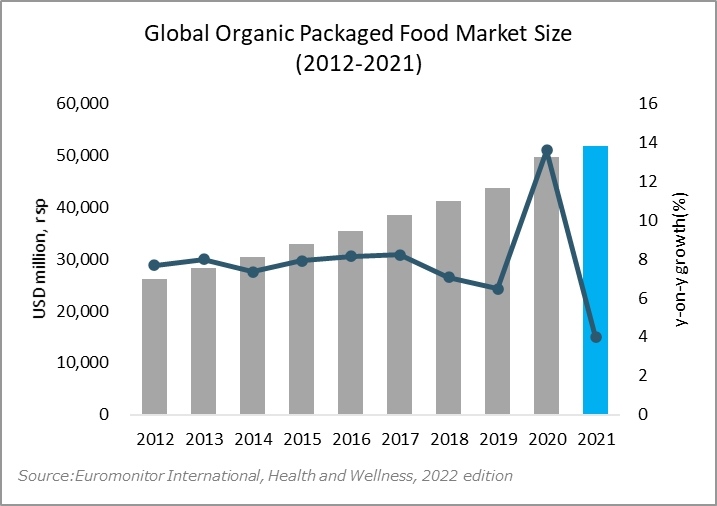 Despite its marginal share in comparison with organic claims, accounting for less than 1% of total SKUs, plant-based has substantial growth potential considering the robust growth of flexitarianism. While the number of vegan or vegetarian consumers is low worldwide, the number of consumers trying to limit their animal product consumption is much more significant – for meat, this has now reached more than 20% globally. Furthermore, pet owners are more likely to choose either vegan, vegetarian or flexitarian diets. This trend among pet owners is likely to be reflected in the products that they also choose for their pets.

The recent trend toward meat-rich, ancestral diet pet food, which moves the industry in the opposite direction from sustainability, is unlikely to disappear in the near future, with many pet owners believing that dogs and cats are designed to consume meat for optimum health. However, pet owners are now increasingly seeking products that they perceive to not only be better for themselves and their pets, but also for the planet, highlighting huge growth potential for more sustainable and healthier pet food ingredients. Companies that can seize and invest in this new growth frontier should perform well over the forecast period.

Sustainability in Tobacco and Cannabis: the Role of Regulators, Businesses and Consumers

M&A in Consumer Health in an Era of Uncertainty: Evaluating 2022 and Beyond

In 2021, mergers and acquisitions in consumer health roared back, as economies opened up and consumer sentiment rode high from widespread vaccine access and…