Euromonitor International’s Australia Technology, Communications and Media Country Briefing highlights the antipodean nation’s technological advancement and increasing penetration rates of advanced digital services among affluent and tech-savvy consumers. Most of Australia’s population and digital spread is concentrated in large cities such as Sydney and Melbourne, and providing high-speed broadband to remote, rural communities has been a logistical challenge. The government, on its part, has prioritised rural broadband connectivity with the National Broadband Network (NBN), which aims to provide 8.0 million broadband connections, covering all households, at speeds of up to 100Mb/s by 2020.  By December 2016, more than three million homes are expected to be connected to the NBN. 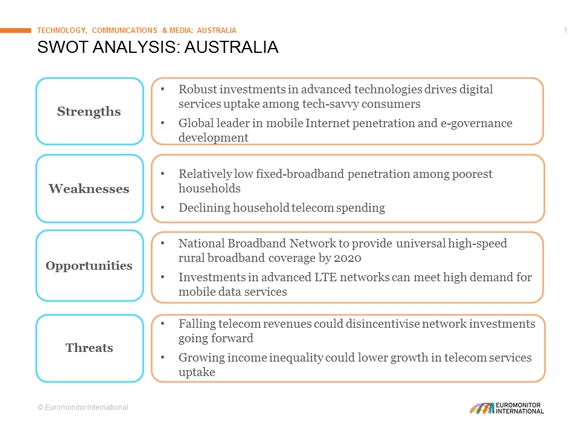 Global leader in mobile broadband connectivity and e-governance but household telecom spending weakens due to rising unemployment and income inequality:

Can the NBN address Australia’s slow and expensive broadband?

Australia lags behind in the developed world in terms of its broadband speeds. Moreover, the broadband market is dominated by the fixed-line incumbent Telstra, which has kept prices high. The NBN, on the other hand, aims to make cheap, superfast broadband available to all citizens, thereby driving growth of e-commerce, mobile gaming, video-on-demand (VoD) and a host of other digital services. The government introduced changes in the project’s technology in 2014, replacing the original fully fibre-optics based-model to a mix of technologies including fibre and copper. While this was done to expedite network construction and reduce broadband costs, it has been argued the new technology specifications will keep speeds low without addressing high prices. For instance, a report by cloud service provider Akamai states that the move to a partly copper-based network will slow down speeds going forward. Consumers might also have to pay higher prices to watch high-definition (HD) videos online due to additional charges imposed by the NBN on service providers such as Netflix.

Fan Engagement and Sponsorship in the Metaverse