The Healthy & Natural Show made its debut from 5-7 May in Chicago. Exhibitors from the beauty and personal care, consumer health, hot drinks, packaged food, and soft drinks industries were present to show the latest products designed to appeal to consumers looking for better-for-you, functional, natural, and organic products. Below are the top 4 trends that the Euromonitor research team of Chris Schmidt, Eleanor Dwyer, Emily Balsamo, and Virginia Lee observed.

Are banana and cactus waters the next coconut water? 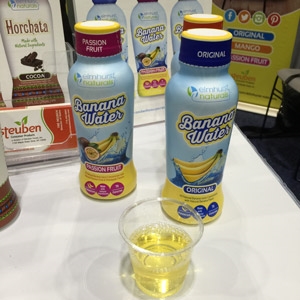 The rapid rise of coconut water from a niche health food store product to a mainstream beverage in the US has numerous beverage companies introducing other “plant water” products to capitalize on growing demand for healthier beverages. At the show, Steuben Consumer Foods showcased its line of Elmhurst Naturals banana waters while The Healthy Beverage Company sampled its line of Steaz organic cactus waters. Steuben Consumer Foods said that banana water is a “healthy hydration drink” enjoyed by runners and other active people. The company markets the banana waters as a 70-calorie drink that is high in potassium with no added sugar. The production process involves pureeing the banana to produce a banana juice concentrate which is then mixed with water. Steaz said that cactus water is anti-inflammatory and has half the sugar of coconut water. The company adds organic green tea to the cactus water to boost the health profile and raise the level of antioxidants. The cactus water comes from the fruit of the cactus, the prickly pear, not the cactus leaves, and is naturally red in color.

The growing interest in plant-based protein was reflected in sports nutrition products displayed at the show. There was a focus on premium, “lifestyle” branding and newer plant sources. Pea and hemp are well established sources of protein. Some brands at the show used more novel sources of protein such as pumpkin seed, quinoa, amaranth and even mushroom. ALOHA Inc showcased its ALOHA Protein organic, plant-based dietary supplements that contain 18g of protein per serving through the use of peas, pumpkin seeds, and seeds. Campbell Soup’s Bolthouse Farms subsidiary introduced 1915 organic protein drinks made with almond and soy milks and pea protein, an extension to their 1915 line of organic, cold-pressed juices. They said this is the first ultra-premium protein drink on the US market. 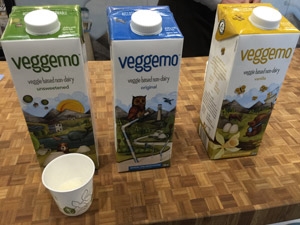 US consumers are continuing to turn away from dairy. Years ago, dairy-averse consumers had little choice for a milk alternative than soy milk, but now there are more varieties of milk alternatives than ever. Increasing research funding due to high demand has jumpstarted the industry, resulting in a myriad of varieties of ever improving taste, quality, and nutritional content. In the past few years, almond milk has overtaken soy milk as the best-selling milk alternative in the US, but the ambition of exhibitors at the Healthy & Natural show suggest that almond milk’s market dominance may not last long. Exhibitors proudly displayed milk alternatives derived from pea protein, tapioca from cassava, and potatoes (Veggemo), as well as other nuts such as macadamia nuts (Milkadamia) and pistachios and (Steuben Consumer Products). Cashew milk saw an astronomical rise in 2015 and will continue gaining share in 2016; could pistachio or lentil milk follow its lead next year? What is certain is that the market for milk alternatives in the coming years will give dairy-averse consumers an unprecedented level of choice.

Probiotics were prominently featured at the show, with two educational sessions devoted entirely to this newly popular category. On Thursday, Mike Bush, the president of the International Probiotics Association, shared the history of probiotic usage, from the fermented foods that Genghis Khan fed to his troops, to the door-to-door sales of Yakult in 1930’s Japan, to modern day supplements, and also emphasized the diversity of commonly available probiotic strains. The next day, Kiran Krishnan, a Research Microbiologist at Thrive Probiotic, expounded the mechanisms through which probiotics interact with the human body and motivated the need for innovative spore-based probiotics. Moreover, probiotics were omnipresent in the foods and dietary supplements exhibited at the show. Carlson Laboratories, a long-standing manufacturer of fish and cod liver oils, promoted their recent launch of a women’s probiotic supplement. Probiotic veteran Yakult touted its status as “The World’s Leading Probiotic Drink” and celebrated a 16% value sales increase in the US from 2014 to 2015. Lifeway, a producer of kefirs, showed their Lifeway Protein Kefir with 20g of protein per serving and introduced new Lifeway Probiotic Pills dietary supplements. Probiotics also found their way into many functional foods: MELT Organic highlighted a new probiotic-laden dairy-free buttery spread, and Fruit D’ Or showcased a new ingredient called LactoCran (a blend of Fruit D’Or’s organic cranberry protein powder with prebiotic properties and Sabinsa’s LactoSpore probiotic) by blending it into the filling of an organic chocolate peanut butter cup. As publicity surrounding the health benefits of various probiotic strains mounts, indulgent probiotic foods like these are sure to capture the interest of casually health-conscious consumers.