The recently launched Euromonitor International 2022 Global League and Club Indices highlight the continued hegemony of the US at league level and European football at club level. The National Football League (NFL) has maintained its number one position, being trailed by both the UK’s Premier League and other US-based major leagues. On the other hand, the top 10 club list globally is dominated by the giants of European football, with Manchester United scoring highest overall in the index, demonstrating a commercial strength and resilience that has seen the club through a period of under-achieving on the pitch.

Top performers illustrate how digital innovation and tradition work together

Alongside Manchester United, Spanish greats Real Madrid and FC Barcelona also score highly. Their success is characterised by strong legacy, loyal fanbase and massive social media following. The clubs illustrate how heritage cannot be overlooked in understanding commercial strength and ability to appeal to fans around the world. Nevertheless, heritage cannot be treated as sufficient for a club’s sustained growth. All three clubs continue to focus on expanding their online fanbase and are leaders in social media following, having accumulated over 850 million followers between them. Out of the top 10 clubs in the index, nine have a strong social media presence with more than 100 million followers each. Sports properties that optimise their digital strategies to unlock new fans online continue to regularly outperform competitors in the club index. 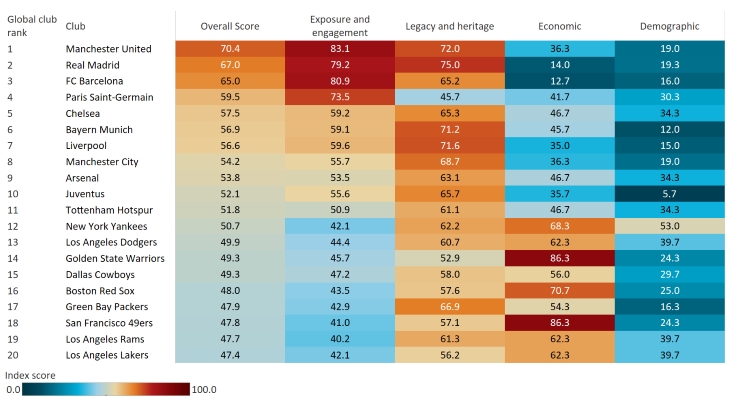 Source: Euromonitor International. Note: Percentage value shows the share of total possible points scored by the club in total and according to different brackets.

The essence of sport has not changed: Winning still matters

On average, clubs in the index’s top 20 hold 15 domestic titles, versus an average of eight titles held by clubs in the top 100 list. Football stalwarts from the index top 10, such as Real Madrid, Bayern Munich and Juventus, hold more than 30 domestic titles each. Real Madrid and Bayern Munich are also among the top three most successful clubs in UEFA Champions League history. Success on the pitch has contributed to the clubs’ strong following and brand growth globally, while at the same time bringing major commercial deals.

Competitiveness within the league or team needs to be nurtured to drive fan engagement and create compelling narratives that play well on social media. While winning is far from the only story that fans care about, it remains an important one. For instance, a recent YouTube video of Liverpool’s dressing room celebrations after winning the FA Cup was one of the club’s most popular videos, garnering over three million views.

The context where the league or club operates is crucial for its resilience and sustainable growth. Favourable economic and demographic conditions are important ingredients in sports properties’ success. The majority of top leagues and clubs are either based within major global economies or boast strong demographic potential. Economic foundation is a strong contributor to Major League Soccer (MLS) appearing among the top 10 leagues. At the same time, the Indian Premier League (IPL) enjoys strong demographic potential which contributes to its commercial attractiveness. Generation Z and millennials comprise half of the 1.3 billion Indian population. With over 215 million social media followers across the league and its teams’ accounts, the IPL has overtaken such major players as the Major League Baseball (MLB) and the National Hockey League (NHL) in digital following. 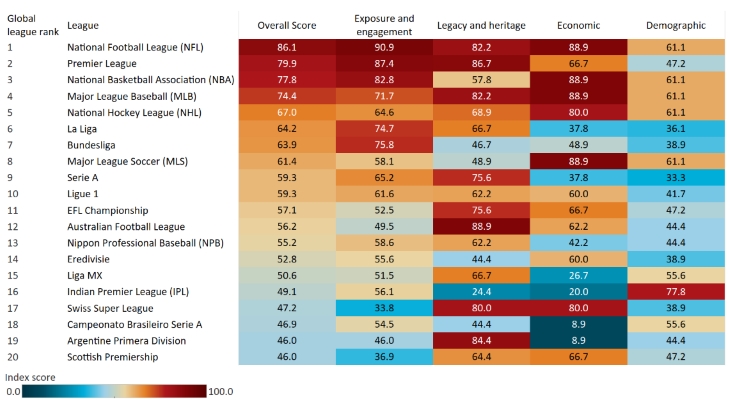 Source: Euromonitor International. Note: Percentage value shows the share of total possible points scored by the league in total and according to different brackets.

Choosing the most suitable sports property with which to form a partnership and understand its fanbase remains a key rule for any successful sports marketing strategy. Brands ultimately want to ensure that the partnership they create with sports properties are generating a positive return on investment (ROI). The League and Club Indices enable stakeholders to see the big picture, helping them to fully understand the past, present and future of leagues and clubs globally.

For deeper insight into the indices check out the full report.