City size remains the key explanatory factor for income inequalities across the world's urban agglomerations. The Gini coefficient is a standard economic measure of income inequality - the larger the value of the coefficient, the higher share of total income is concentrated in the pockets of the most affluent population. As illustrated in the chart below, the bigger the city, the greater value of the Gini coefficient. 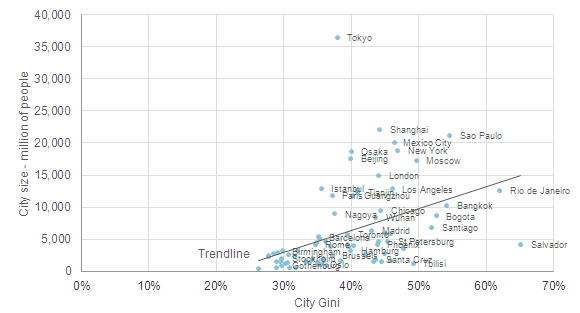 The reasons and sources of growing inequality are widely debated. The effects of inequality, however, are well known. For example, the research shows areas with greater disparities in income tend to be segregated, face higher crime rates, suffer lower average life expectancy and experience acute health problems. For urban planners, this poses significant challenges in designing policies that integrate the communities of poor inhabitants and ensure balanced development of the city. For urban marketers, the inequality poses challenges in estimating consumer purchasing power as well as understanding the demographics and preferences of distinct communities in the city.

The relationship (see chart) holds true both across the globe as well as within the boundaries of a single country. Be it the US, the UK, China or Brazil, the most unequal distribution of income is found in the main cities of the respective countries. Thanks to the large jobs market, megacities often lure the unqualified population from the country‘s hinterlands (or from abroad, in the case of the most developed countries). For the skilled and talented, big cities magnify their returns to scale. The result is enormous disparities in income.

Los Angeles and New York Among the US' Most Unequal Cities

The US is one of the wealthiest nations in the world, yet compared to countries with similar welfare levels, income inequality in the US is strongly entrenched. Furthermore, the inequality is growing; the difference between the highest and the lowest wage rate in the US has been increasing throughout the last couple of decades. The key metropolitan areas in the country, according to the latest data from the American Community survey, fare even worse than the country as a whole. As measured by the Gini coefficient, inequality of household income in New York, Los Angeles, Houston and other metropolitan areas exceeds the national average.

The legacy of racial segregation, concentration of poor in the central urban areas, lack of skills and education are typically the reasons behind the poverty in major US cities. Mansions in neighbourhoods of Los Angeles such as Beverly Hills and Holmby Hills highly contrast with gang-controlled districts of the inner city, where poverty dominates. The neighbourhoods in Harlem, the Bronx or Brooklyn in New York City earn incomes below the official poverty threshold. At the same time, New York City boasts the largest number of millionaires in the country and the US' best-paid jobs are located in Manhattan, just a few miles away.

Inequality is not only about money, but also about politics, the quality of neighbourhoods, and access to public services. New York‘s waste transfer system relies on trucks to collect the city‘s trash, and the waste is first collected into intermediary transfer centres where it is redistributed. Manhattan generates considerable share of waste in New York, yet it had no such waste transfer centres in 2012 (the first one was approved for construction by the city's administration in July 2012). South Bronx has 19 of them.

US metropolitan areas are usually comprised of several counties, in some cases as many as 10-30 of them. Research at county level has revealed that inequality is consistently larger in the more populous territories as well. Some 34% of the US population reside in 20% of the most unequal counties, mainly in southern and north-eastern regions of the country.

The UK, thanks to its high overall income level, escapes the inequality levels prevalent in many developing countries. The country‘s urban centres, however, often exacerbate the disparity in incomes. London, the key metropolis in the country, is the best example of prosperity and misery existing in close proximity in the UK. The extremes of income distribution in London are so acute that the city rather resembles the megacities of the US than other cities in the UK or Europe.

The variance of income inequality is not as severe in other main agglomerations in the UK, as other cities lack the extremely rich households. Yet large cities in the UK remain the most segregated areas, as per research by Centre for Cities. For example, Glasgow, Birmingham, Leeds and Edinburgh all have districts with over 23% of the population on unemployment benefits, compared to the national average of 3.9%.

Inequality in China Is Increasing, but the Country Is Most Unequal In Its Cities

The exploding urban population and booming economy in China have led to the recent trend in rising income inequality. The difference between the average income of the 10% richest and 10% poorest households in China was 13 times in 2001; the corresponding difference in 2011 was 35 times, representing an unparalleled shift in wealth distribution even by world standards.

The population of metropolitan Shanghai has grown from 16 million in 2001 to 21 million in 2011. Most of the poor in the city are among the five million that have arrived into Shanghai in search of a better life, but remain stripped of their rights to register in the city, obtain legal work or own a flat. Urban immigrants in China live on the urban fringe, often work for extremely low wages, and sleep in crowded rooms. Official calculations of income distribution, in fact, do not even include the so-called floating population (or non-registered) population in Shanghai. In 2011, the non-registered in the city made up around seven million people, most of them immigrants from rural hinterlands.

At the other end of the spectrum, many urban households in China are experiencing unprecedented growth of their real incomes. The jobs in previously non-existent service industries in megacities offer a large scale of activities and increasing rewards. The rising incomes positively impact consumer spending as increasingly well-off households are eager to purchase previously unavailable property and/or durable goods.

Since 1988, China has undergone a massive privatisation programme to improve housing conditions. Rising real incomes combined with government subsidies and incentives have resulted in home ownership rates in some areas at 80% - higher than in the US on average (65%). As a result, consumer spending on furnishings at global retail outlets such as IKEA has rocketed. The demand for Western brands among rich Chinese is so great, that at times, in the absence of genuine items, this demand is satisfied by fake Apple or IKEA shops.

Brazil has its own story of urban inequality. The country‘s middle class is growing and inequality is at a long-term low. The Gini coefficient in Brazil is down from 61.5% in 1991 to 51.7% in 2011.  In urban areas, however, the inequality persists. In 2011, the difference between average income of the top 10% most affluent and 10% least affluent Brazilian households was 38 times. Within Brazil‘s key cities, the difference was 39 times in São Paulo, 58 in Rio de Janeiro, and 67 in Salvador.

Favelas, or "the subnormal agglomerations", as termed by Brazilian bureaucrats, are well known destinations for the poor in Brazilian cities. More than 2.2 million in São Paulo and more than 1.7 million in Rio de Janeiro live in the "subnormal agglomerations", according to the census in 2010. Even though most of the households in favelas do have electricity, around 16-18% of the households do not have electricity meters installed. This often means that electricity suppliers do not visit to fix outages and going several days without electricity is commonplace. Household rubbish is regularly collected at only 60% of favelas in Rio de Janeiro and 80% of favelas in São Paulo. For the rest of the households, the city service companies collect it "at times", and in the meantime household rubbish accumulates around the property, is thrown directly into lakes or rivers, or sometimes is simply burnt or buried in the ground.

The current efforts by Rio de Janeiro's municipality, due to the upcoming 2016 Olympics and 2014 FIFA World Cup, may change what appeared unchangeable a few years ago. The omnipotent drug gangs are being pushed out of the favelas with some success, but many remain cautious about the eventual results of the progress.

Brazilian cities also easily accommodate the affluent. Barra da Tijuca is a coastal land in Rio de Janeiro that recently has undergone a wave of new construction. The district is characterised by high rise apartments, wide alleys and sprawling shopping centres. The life in Barra is a place where Rio unveils its magnificent physical beauty and at the same time the crowded downtown and the city‘s favelas remain further away.

There is one single consistent trend across the world's cities: Large means inequality. Despite the strong economic growth in China and Brazil, income inequality is persistent in the largest cities in both countries. Similarly, high overall income levels fail to prevent inequality in New York or London, the world's richest cities.

In many cases, the dynamics of inequality development in cities differs from income inequality trends in their respective countries. The result is relatively different characteristics of consumer markets; consumer segmentation in terms of income levels may be considerably different at city and at country level.

Population growth, which is anticipated for a considerable majority of the analysed cities, will further entrench the current inequalities in the world's megacities. The fast-growing populations of the world's megacities will grow their mega-rich as well as their extremely poor communities.