Many see Japan as a technology leader in various industries and the country is continuing to develop innovative solutions in the digital space. However, if we look at adoption of technology on the consumer side, there is greater inconsistency than might be expected. 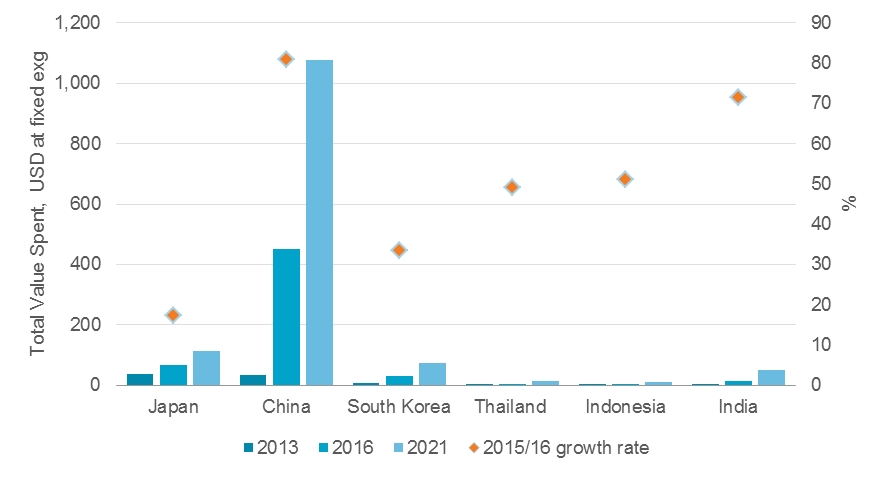 Smartphones are the catalyst for digital disruption in countries. The leading digital commerce marketplaces have developed platforms optimised for mobile apps. However, in Japan, smartphones are not as ubiquitous as one would expect. In Japan, the population aged over 60 accounts for 34% of the total population, and is characterised by low smartphone penetration. Only 28% of respondents aged over 60+ owned personal smartphones, according to Euromonitor International’s 2016 Global Consumer Trends Survey. This is extremely low compared to other Asian countries. Against the backdrop of low smartphone penetration among seniors, there also is a strong presence of feature phones that offer fewer functions in exchange for ease of use. As a result, a sizeable portion of the Japanese population is unable to take advantage of digital innovation. 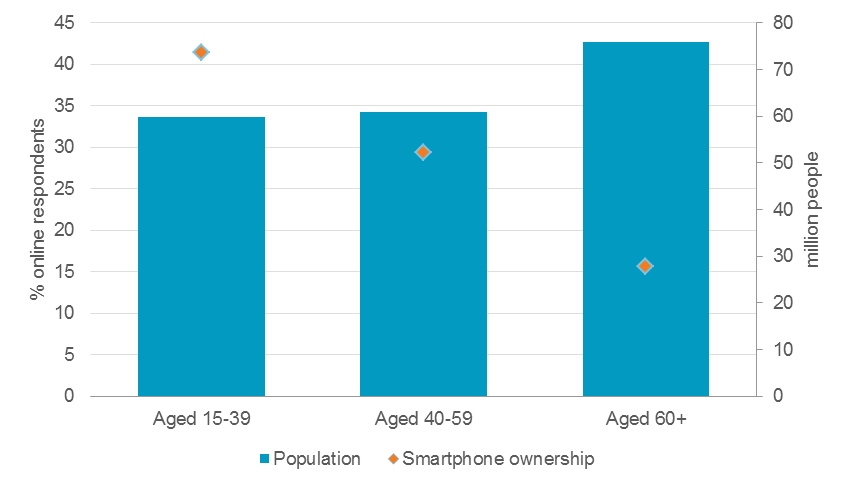 In addition to the relatively conservative nature of Japanese consumers, there also has been a lot of media coverage on cybersecurity from the early digital era, which has made consumers concerned. For example, Consumers Affairs Agencies regularly warns against cyber-crimes due to the growing prevalence of e-commerce. As a result, Japanese consumers are highly concerned about the potential risk in online activities. In fact, only 6% of Japanese online respondents answered that they were willing to share personal information online, which was the lowest in 20 responding countries, according to Euromonitor International’s 2016 Global Consumer Trends Survey.

This hesitation toward sharing information online is especially true with mobile users. Many Japanese consumers utilise long commuting time on trains for mobile activities, but still feel uncomfortable entering their credit card information aboard a busy commuting train, afraid that other riders may see their personal information on the screen. Additionally, many are reluctant to let mobile devices store payment information, and would rather use alternative payment options, such as cash on delivery. In general, Japanese consumers are typically risk-adverse, and remain cautious about making payments on websites. Despite the rise of card payments worldwide, Japanese consumers bucked the trend, opting to more often pay for purchases with cash compared to other developed countries. Within Asia, while 85% of mobile remote orders were paid online in South Korea, only 51% were paid in Japan. 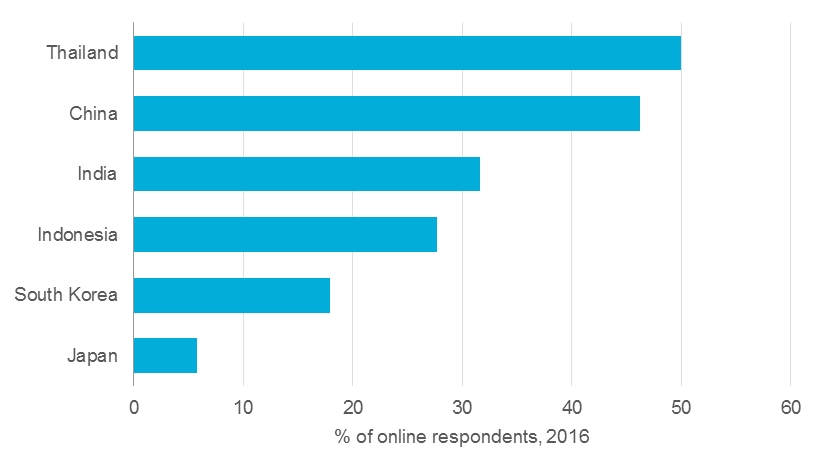 Another reason why mobile digital purchases have struggled to gain wider acceptance in Japan is due to the many other shopping options that Japanese consumers already have. One example of competition for mobile proximity payments is maturity of contactless payments using a physical card. This is because in Japan, consumers prefer to use a physical card to touch an NFC-enabled terminal rather than a device. Therefore, many mobile proximity payment brands such as Suica and Edy also offer consumers physical cards along with the digital payment option. Contactless smart cards, registered a 26% value CAGR during 2011-2016, and in 2016 Japanese consumers held an average of three contactless smart cards per person; far higher than in other Asian countries. Without a compelling reason to switch from contactless smart cards to mobile proximity payments, most consumers are satisfied with using card-based tap-and-go payments in an in-person environment.

The gap between the advancement of mobile-centric products and actual adoption of mobile commerce amongst consumers is something businesses in Japan need to address. Communication with the customer or data collection made via mobile devices can be valuable, but is currently ineffective due to this gap. Over the forecast period, mobile digital purchases in Japan will continue to face these demographic, lifestyle and competitive obstacles.

However, there are positive developments that can help drive mobile commerce. For example, 2019 will be the first year with production of feature phones planned to be discontinued. Following the increase of low-cost smartphone plans, a switch from feature phones to smartphones can be expected. Moreover, solutions are being introduced in response to the high security concerns among Japanese consumers. For example, the mobile-focused fashion marketplace called ZOZOTOWN, implemented a post-pay product in 2016. GMO post-pay allows ZOZOTOWN customers to make post-pay options by cash, at convenience stores, after safely receiving their products. This is important as in Japan, credit card payments are mostly paid in full each month. Therefore the introduction of post-pay service will lower the hurdle and expand mobile remote purchases for those consumers who can only spend a limited amount of money each month, such as students and housewives. The post-pay options will support expansion of remote purchases while also meeting the demand of the cash-driven society.

Recognising the gap between digital connectivity available and digital commerce uptake, digital innovators and promoters like Suica should make concerted efforts to address concerns among Japanese consumers while promoting mobile digital purchases like Mobile Suica. Although mobile digital purchases in Japan is expected to see a strong 11% value CAGR at constant 2016 prices over the next five years, growth could be even stronger with consumers’ greater acceptance. In fact, other Asian countries are expected to see more than 20% value CAGRs. If Japan wants to remain a digital leader, its wider society needs to be incentivised to adopt mobile technologies. At the moment, it isn’t empowered – or interested enough.

Trade Round Table - Roadmap to the Future

Euromonitor International’s Voice of the Industry: Retailing survey includes the opinion from more than 450 professionals working at retailers and consumer…

Explore how underlying drivers could change different consumer worlds over the next 20 years. In this report, Euromonitor outlines a vision for commerce in…