Travel is booming, with international arrivals set to increase 5% to total 1.4 billion trips in 2018. The recently released Top 100 City Destinations ranking by Euromonitor International shows that the top 100 cities are growing even faster at 7.5% between 2017 and 2018. This is a continuation of a trend which sees the top cities outperforming global arrivals growth, with city hubs extending their importance for the global travel industry. Especially in Asia, which accounts for 41 of the top 100 cities, growth has been very strong. The number of cities from Asia in the ranking has steadily risen from 37 cities in 2012.

Here we will have a look at each region’s standout performers and highlights.

The strong performance of Asia is largely based on a strong increase in Chinese outbound travellers, with the country set to register 256 million outbound trips by 2030. With 80% of arrivals into Asia stemming from the region itself, it is clear that intra-regional travel is very important.

Hong Kong and Bangkok held on to their top two spots for another year. However, cities in Japan and India that are showing strong arrivals growth, and it is expected that Delhi will be ranked 10th next year in the ranking. Tokyo and other Japanese cities like Osaka are likely to benefit longer-term from the 2020 Olympics which will take place in Tokyo.

One city seeing a strong decline in arrivals was Seoul. Ranked 16th in last year’s ranking, it drops to 24 this year. After a huge decline in Chinese visitors due to political tensions, the number of foreign tourists shrank by 15%. However, arrivals are expected to pick up slightly in 2018, as political tensions with China have eased, talks with North Korea progress and the 2018 Winter Olympics in PyeongChang have put a spotlight on South Korea.

The biggest news in Europe is that Paris moved above Dubai in the ranking. It had a bumper year after a disappointing 2016, due to the terrorist attacks of November 2015. Strong growth was also registered by Turkish cities, as the country rebounded from a turbulent 2016. The alleviation of political tensions between Turkey and Russia helped Antalya more than most. 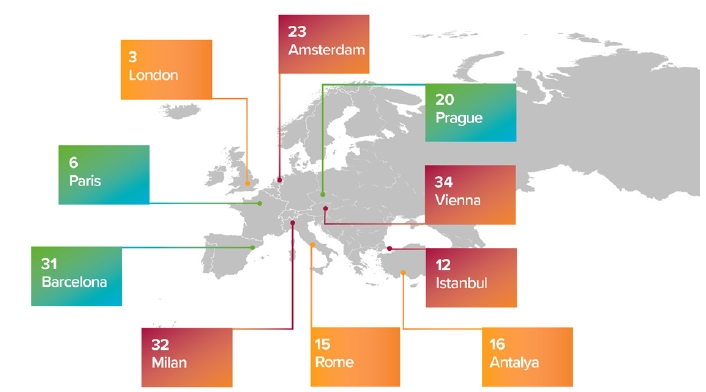 While it was expected that Trump would have a negative impact on arrivals, this has not turned out to be the case in US cities. Only Las Vegas seeing a decline in visitors in 2017, but this is based on a strong dollar and the shooting in October last year.

Nevertheless, Trump has provided a lot of uncertainty. Euromonitor’s Travel Forecast Model shows that a full-blown trade war between the US and China could result in almost 200,000 less outbound US travellers, and over a million less outbound travellers from China in 2019. An extended trade war can clearly have an impact on cities highly reliant on American and Chinese travellers, which might throw up some interesting movements in the ranking over the coming years. 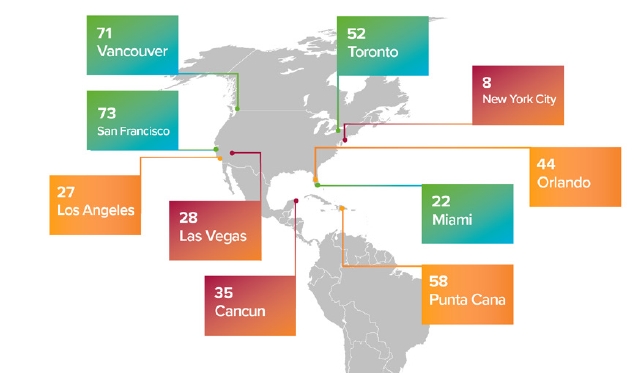 Johannesburg is the only Sub-Saharan city present in the top 100 ranking, with cities heavily concentrated in the Middle East and North Africa. With the Single African Air Transport Market (SAATM) initiative, launched in January 2018 and signed by 23 African Union member states, air connectivity on the continent should be greatly improved in the coming years, which could benefit sub-Saharan cities.

Over the past years, the MEA region has been a major loser as cities like Jerba and Sousse in Tunisia, or Sharm el Sheikh in Egypt dropped out of the ranking due to terrorist attacks and subsequent slumping demand. While we see some positive movements for these cities, especially Cairo is seeing a strong resurgence in this year’s ranking, with arrivals growing 46% in 2017.

Top 10 City Destinations in 2017, Africa and the Middle East 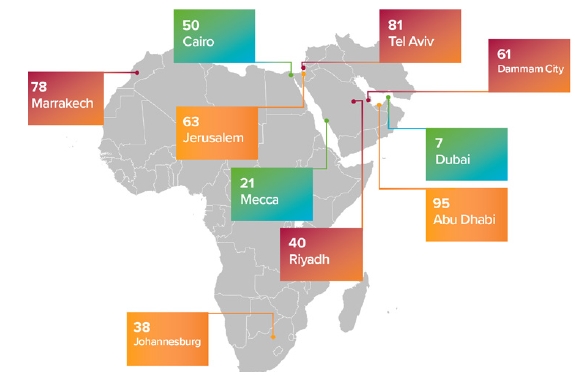 The recovery in travel modes sales is proving a gradual one, given the size of the losses seen in 2020, when the pandemic decimated the travel and tourism…