Euromonitor International has identified the world’s top three markets by household kitchen penetration growth in 2017. Based on factors such as growth of kitchen possession, associated facilities and kitchen-based durables penetration, the leading markets are Ethiopia, Uganda and Pakistan. These frontier markets are opening up new opportunities for providers of household goods and services, particularly kitchen appliances and kitchenware, relevant online and offline retailers, and furniture manufacturers. Consumers typically spend more on the kitchen space than any other room in the household, making it a particularly lucrative segment for companies to tap into. This article is part of a series that will highlight key trends from Euromonitor’s “The Drivers and Opportunities of Changing Household Size” strategy briefing.

In 2015, Euromonitor named Ethiopia as one of the 20 Markets of the Future that will offer the most opportunities for consumer goods companies. The country’s large and growing population (of almost 100 million people) and continued economic growth is expected to drive sales of consumer goods across most categories. This may be especially true for kitchen appliances and other products. The African country will witness the world’s highest annual jump in household kitchen penetration in 2017, reaching 10.0%. Though homes with a kitchen remain a small minority, the pace of growth will provide additional motivation for brands to enter a market still seen as ‘frontier’ by many companies.

The biggest obstacle to continued development of kitchen facilities in Ethiopia is water access. Less than half of homes have access to a water supply, while the country is frequently beset by droughts. Piping infrastructure is weak and few homes have the incomes to pay for private construction of sewage. Nonetheless, rapid urbanisation is allowing more Ethiopians to be within the city water grid, and this is driving homes to equip kitchens. The availability of cheap basic kitchen appliances, such as electric kettles, ovens and refrigerators, is enabling affordability, while the rising popularity of online classifieds sites for used goods such as jumia.com.et gives consumers additional options for low-cost purchases.

In a Sub-Saharan region full of dynamic economies, Uganda is a particular stand-out. The country has an extremely young and rapidly expanding populace, which has much greater aspirations in terms of home comfort than previous generations. Strong purchasing power in the capital city of Kampala is driving uptake of new housing, while rapid housing completions in urban areas are providing a strong supply modern accommodation outfitted with kitchens. Household penetration of kitchen facilities in Uganda will increase annually by almost 1.0% in absolute terms in 2017, the second highest globally.

Ugandan Millennials are finding more earning opportunities in urban hubs, and they are much more in tune with technology and digital trends than their predecessors. This is allowing them to find better deals for kitchen appliances (via cross-border sites such as China-based AliExpress, for example) as well as recognise their household needs. For example, a fully operational stove oven can be replaced by a small electrical steam oven, while a microwave can replace most food-heating big-ticket items. Seeking opportunities in the market, local start-ups such as kitchenware-focused e-commerce site 2fumbe.com have risen up in the past few years.

Pakistan has a far more developed kitchen segment than either Uganda or Ethiopia, with more than 60.0% of local homes in possession of a kitchen space. However, by global standards, it remains a relatively underdeveloped nation by penetration of kitchen durables and access to facilities such as electricity and water. In 2017, Pakistan will record the third fastest expansion rate of household kitchen penetration 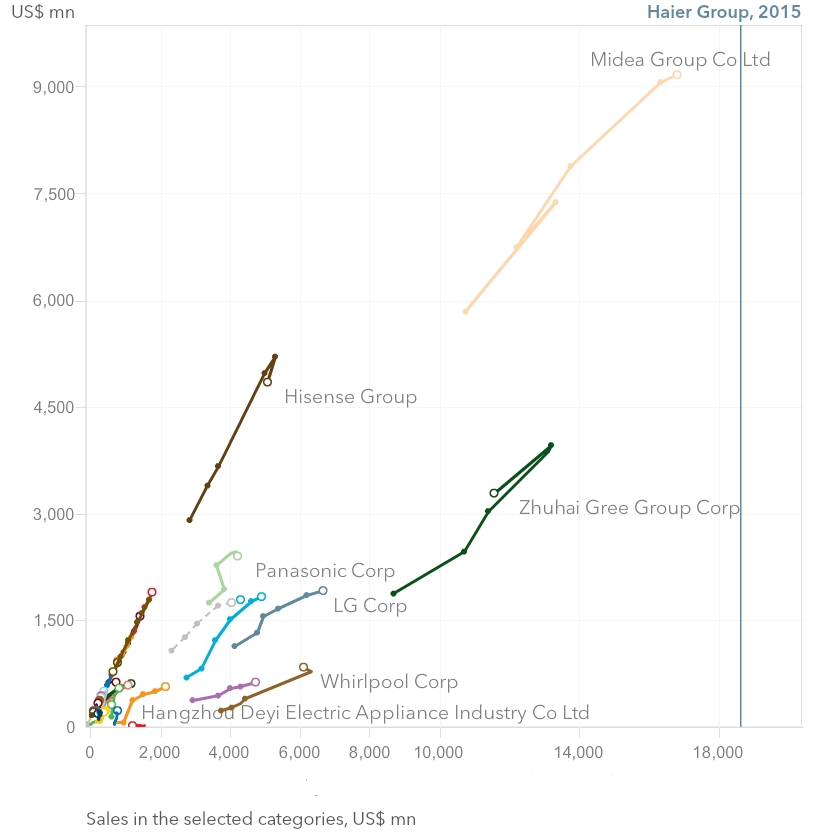 Pakistan’s huge number of households, large demand for affordable kitchen goods and rapid urbanisation are attractive factors for kitchen-focused manufacturers and brands. In particular, due to Pakistan’s relative proximity and low household incomes, the market has become a target for Chinese appliance companies eager to expand beyond their domestic market. Haier Group, China’s largest appliances brand, has production facilities in Pakistan and is strongly represented locally through its Haier Pakistan branch. The company’s low-cost kitchen durables are highly appealing to emerging-market consumers, where the company has made major strides in recent year. However, as demonstrated by the above Competitor Analytics model, Haier has a number of like-minded competitors from China, including Midea, Zhuhai Gree and Hisense.

Apple Inc: Focus on Services to Grow User Base

Kidults are Driving Sales of Toys and Games

World Market for Toys and Games

Demand for toys and games soared during the pandemic, as consumers looked to toys to combat boredom. As the world moves into the “new normal”, can toys and…