The global economy is facing significant challenges, and this situation will continue into 2016. Slumping oil prices, Chinese slowdown, and geopolitical tensions will have significant economic consequences. However, developed economies are strengthening, and taking back the wheel of the global economy. We have identified the top three global macroeconomic trends to watch for in 2016.

Another year of low-inflation in the developed countries

In 2016, consumer price inflation will remain under 2.0% in most developed economies. The slowdown in China and other emerging markets will keep international demand sluggish, and continue pushing commodity and manufacturing equipment prices down. Slow GDP growth in all major economies will also result in lower demand for final goods, dampening their prices. Oil prices are also unlikely to see a significant upturn, with OPEC failing to agree on limiting supply in the December 2015 Vienna meeting and Iran re-joining the international oil market, combined with the above mentioned demand side factors. Furthermore, improving technologies of some products, such as smartphones, has allowed their prices to decrease. As a consequence of these supply and demand factors the expectations of lower inflation are formed, which are partially self-fulfilling and contribute to lower inflation in the short-term. As consumers expect prices to remain low, some purchases are being postponed for later, dampening aggregate demand and halting price increases. This is why lifting the inflation to the healthy 2.0% level will remain a major challenge for the central banks in 2016. For example, for this same reason the FED interest rate rise in 2016 will be very moderate and gradual in the upcoming year. 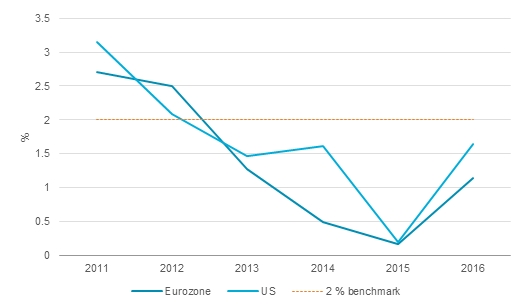 Most of the developed economies are expected to grow slightly faster in 2016. While the USA has demonstrated stronger growth already in 2015, the eurozone is also expected to do better in 2016. Growth is expected to improve mostly due to recovering confidence and increasing domestic demand, in particular private consumption. An important factor for consumption and GDP growth will be slow but steady labour market improvements. Consumers in these countries will also benefit from low energy costs, allowing them to spend extra on other goods and services. Low oil prices might also lead to lower production costs and help improve the export competitiveness of manufacturing producers in developed countries. While international trade will face the challenge of decreasing Chinese demand, trade among the developed countries is likely to intensify. Progressing towards the agreement on Transatlantic Trade and Investment Partnership would add significantly to that.

Another positive factor is the continuing low interest rate environment, which should support investment and consumption. Credit conditions in the USA and eurozone have been improving lately and with the most recent quantitative easing in the eurozone, there will be even more money available for investing. However, consumer and business sentiment is the crucial factor here. Without improvement in confidence and expected return on investment, even the most accommodating credit conditions will fail to boost investment. 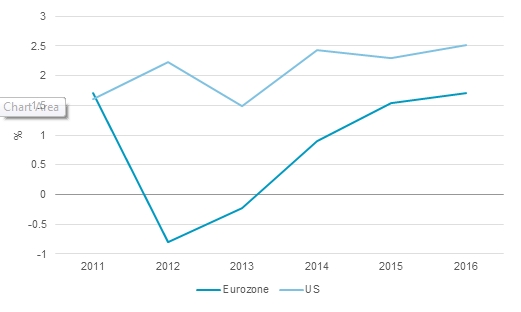 The slowdown in major emerging markets will persist

China will continue its transition to more consumption-driven growth. We forecast 6.3% real GDP growth for 2016, but the risks are tilted downwards. With the uncertainty surrounding Chinese GDP measures, it is likely that the Chinese economy will show significantly lower growth in 2016.

The most troubled emerging markets – Russia and Brazil – will continue on a downward path, with their recessions only likely to bottom out in late 2016-early 2017. In general, economic reforms and political issues will be decisive for these countries. External conditions will remain disadvantageous – commodities and oil prices are expected to stay low and foreign demand will continue to be subdued.

With Argentina experiencing near stagnation (Euromonitor forecast is 0.8% real GDP growth in 2016) and Brazil in recession, the region as a whole will have another difficult year. Most Latin American countries will continue to grow at a 2-3% pace – a sluggish development for these economies, which previously saw their real GDP grow in the 5-6% area. Major long-term reforms are needed in most of those countries, in order to return to rapid growth.

The outlook for 2016 is marked with uncertainty and downside risks. While all countries will have to face some challenges, there is an increasing divergence between improving and relatively comfortable developed economies and struggling emerging markets.