The National Restaurant Association (NRA) Show took place in Chicago from May 16 to 20. The show and its BAR event hosted attendees from around the world who saw the latest in packaged foods, hot and soft drinks, alcoholic drinks, cooking equipment, and software for the restaurant industry. Below are the top 5 beverage trends that the Euromonitor research team of Eric Penicka, Mark Strobel, and Virginia Lee observed. 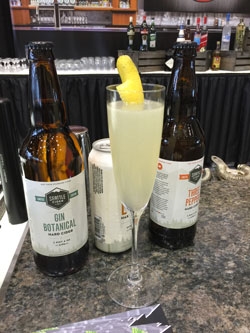 1. Dry Cider: As cider continues to have staggering growth in the US, cider companies are attempting to appeal to a wider group of consumers. In a bid to disprove common perception that ciders are for women, cider companies have focused on dry and bitter product development. Ciders featuring craft beer’s beloved hops were featured in Angry Orchard’s Hop’n Mad Apple and the Colorado Cider Company’s Grassho-ah. Beyond hops, semi-dry and dry ciders are being formulated to increase session-ability. Woodchuck’s Gumption blends American sweet eating apples and British dry cider apples to create a semi-sweet cider to assist consumers in transitioning to dry ciders. At the Demo Lounge, Wirtz Beverage Group used Seattle Cider Co’s gin botanical cider to create a Seattle “75” cocktail.

2. Ginger: Though many Asian cuisines use ginger as a spice, ginger’s use in the US has typically been limited to gingerbread, ginger ale, and ginger beer. As the Moscow Mule cocktail has skyrocketed in popularity so has ginger’s profile. Ginger appeared in multiple formats at the NRA Show. Reed’s Inc introduced Reed’s Stronger Ginger Brew with 50% more ginger than its Extra Ginger Brew for those who want even more kick in their Moscow Mules. Both PepsiCo and The Coca-Cola Company featured ginger mocktails in their mixology demonstrations. Bridging mixology and culinary worlds was Pickett’s Ginger Beer concentrated syrup from Pickett Brothers Beverage. The syrup can be mixed with soda water to make ginger beer, stirred into cocktails, or poured over ice cream.

3. Origin: The ambiguous, impossible to define term, “craft”, is slowly being replaced with labels of origin. Alcoholic beverages producers and retailers have noted consumer confusion of the craft label and an increased interest in provenance. As such, producers are working to build an image of familiarity using their home location. At BAR, exhibitors were keen to identify their origin; with Canyon Wind Cellars calling out its Colorado origins while  Koval Distillery describe itself as “Chicago’s first distillery since the mid-1800s”. Regarding coffee, origin is of equal importance as third wave coffee continues to evolve and gain traction in the US. S&D Coffee & Tea showcased their Epic series of single-origin coffees from Nicaragua and Sumatra while Royal Cup Coffee showed its H.C. Valentine Ethiopian Yirgacheffe coffee.

4. Personalization: Fountain machines that allow for customisable beverages were a hit at the NRA Show this year. US consumers, especially Millennials, want variety and the ability to create their favourite drink. The Coca-Cola Freestyle 7000, an NRA FABI award recipient, is a mid-volume countertop dispenser that allows users to create their own beverage combinations through the machine interface as well as by linking to a smartphone app. The app, which has had one million downloads, allows users to select a certain percentage of up to three drinks to be included in their mix. It also allows users to share their combination through social media. The Freestyle also allows foodservice operators to tailor their flavour and brand selections based on recommendations from Coca-Cola through real-time information gathered from the machine itself. The Pepsi Spire fountain also gives customers the opportunity to personalize their beverages by adding up to three flavour shots, including cherry, lemon, vanilla, strawberry, raspberry and lime. Pepsi Spire also allows users to share their favourite mix on Facebook and Twitter. 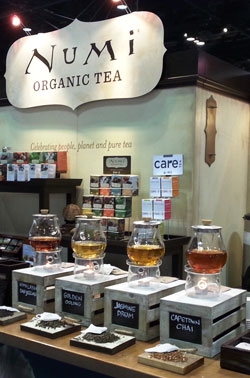 5. Premium beverages: Premium beverages made from high quality ingredients with often complex flavours made a big appearance. Numi Organic Tea, which purchases only fair trade certified ingredients and prides itself on social responsibility and sustainability efforts, offers a wide range of intricate teas. Numi’s new Nspire line features organic whole leaf teas and herbs and uses hand-sewn cotton sachets instead of traditional see-through tea bags that are mostly made from plastic. Sodas are becoming more adult-focused and upscale. Sparkling beverage makers DRY Soda and Sipp Eco Beverage Co tout their products as being the result of premium mixology and include such flavours as lemon flower, cucumber and lavender.

Will the Metaverse Emerge as a Key Destination in Alcoholic Drinks’ Digital Journey?