Although emerging and developing economies are leading the global middle class expansion, developed countries will continue to offer more solid middle classes with higher disposable incomes and greater homogeneity in terms of incomes, tastes and needs than their emerging market counterparts.

For the long-term period through to 2030, Euromonitor International has identified five developed markets with the best middle class potential, which are the USA, Japan, Germany, the United Kingdom and France. In these countries, the middle class is the foundation of consumption thanks to their substantial size and high purchasing power, with a median income exceeding US$45,000 (in constant 2014 prices) per household in 2030. 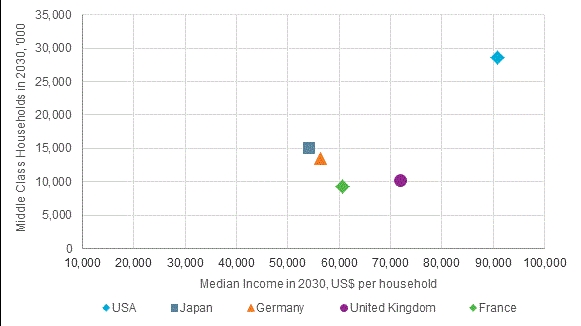 Note: 1) Data are forecast. Median income per household is forecast in constant 2014 prices, fixed exchange rates; 2) Middle class is defined as the number of households with between 75.0% and 125% of median income. 3) The threshold median income of US$45,000 per household is chosen to allow direct cross-country comparison, and to reflect a capacity for discretionary spending in the context of higher living costs in developed economies.?

As well as a substantial middle class, the median income which reflects middle class purchasing power is high in the USA. By 2030, the US median income per household is expected to reach a respectable US$91,508 (in constant 2014 prices), representing a healthy average real gain of 1.2% per year over the 2015-2030 period. The US middle class spending power is further boosted by advanced financial products that allow consumers to tap into consumer credit and home equity withdrawals.

2. Japan: A nation with an engrained middle class mentality

The number of middle class households in Japan is set to fall to 15.5 million by 2030, from 16.5 million recorded in 2014. This decline is the result of a shrinking population which leads to falling household number overall; rising number of single person households (which generally have lower disposable incomes than double-income households); and worsening income inequality. Despite the decline, the Japanese middle class is substantial in size and is set to remain the second largest of all developed economies in the period through to 2030.

Furthermore, middle class income growth prospects are set to improve significantly over the long term. Japan’s median income is expected to grow at an average rate of 0.9% per year in real terms over the 2015-2030 period, compared to the decline of 1.0% per year recorded during 2009-2014. A forecast median income of US$51,950 per household in 2030 will be one of the highest in Asia Pacific and thus give Japanese middle class households considerable discretionary spending capacity.

It should also be noted that the term chûryû , which is often casually translated into English as the “middle class” but is more accurately translated as “mainstream”, reflects the middle class mentality that is engrained in a large part of the Japanese population. In other words, the majority of the population regard themselves as middle class with associated discretionary purchasing behaviour. This explains why luxury is such a “mass” market phenomenon in Japan, as luxury goods signify a middle class lifestyle even when consumers become increasingly price-sensitive.

3. Germany: Relatively weak income growth and a propensity to save will restrain middle class spending

Germany has the third largest middle class in the developed world. The number of German middle class households is set to reach 13.5 million in 2030, up from 13 million in 2015. The substantial middle class with plenty of discretionary spending is a key strength of the German consumer market – Western Europe’s largest market in terms of total consumer expenditure.

Although Germany’s middle class is substantial, stable and relatively prosperous (with a median income of US$49,901 per household in 2014), it is somewhat pessimistic due to weak income growth. Over the 2015-2030 period, the median income per household in Germany is set to increase by an average 0.8% per year to reach US$56,738 in 2030. While this forecast increase will be an improvement from the average real growth 0.4% per year recorded over 2009-2014, it will be nonetheless modest. Relatively weak income growth combined with the German propensity to save will hold back Germany’s middle class consumer spending potential. Therefore, businesses targeting German middle class consumers will need to adjust their market expectations as well as being more competitive in their product offerings.

Although the UK’s middle class is currently the fourth largest in the developed world, by 2017 it will slip one position to become the fifth largest middle class (behind Italy) due to relatively slower expansion. By 2030, the number of middle class households in the UK will reach 9.8 million (slightly less than Italy’s 9.9 million in the same year), from 9.1 million in 2014.

Nevertheless, the middle class consumer market in the UK offers huge commercial potential thanks to high and rising incomes, strong consumer confidence and consumers’ tendency to prefer consumption to saving. Between 2015 and 2030, the median income per household in the UK will grow by an average 1.6% per year in real term – the fastest growth in all the top five developed countries – to reach US$75,274 (in constant 2014 prices) in 2030. In comparison, Italy’s median income in the same year is expected to be a much lower US$43,911 per household (in constant 2014 prices).

5. France: Middle class consumers will be less impulsive in their consumption

Ever since the global financial crisis of 2008-2009, France’s middle class has come under pressure from climbing unemployment, sluggish economic growth, the rising cost of living and cutbacks to services such as educational provision. All this has contributed to changing the French middle-class spending behaviour that businesses ought to note: whereas consumption, especially of leisure and fine products and services, will continue to equate to pleasure, French middle class consumers are growing older, more value-conscious, and less impulsive in their purchases. To address changes in middle class consumer behaviour successfully, companies will need to innovate, including a focus on value and an increased interest in health and wellness.