The rise of the middle class in emerging markets has captured the enthusiasm of global businesses, especially in the context of weak demand growth from developed economies. In targeting emerging middle class consumers, the most successful companies are those which can fully assess the middle class potential in prospective markets. For the long-term period through to 2030, Euromonitor International has identified five emerging markets with the best middle class potential, which are China, India, Indonesia, Nigeria, and the Philippines. In these countries, the middle class is set to become a prominent consumer force thanks not only to their large size, but also their strong income growth prospects and a median income exceeding US$10,000 (in constant 2014 prices) per household in 2030. 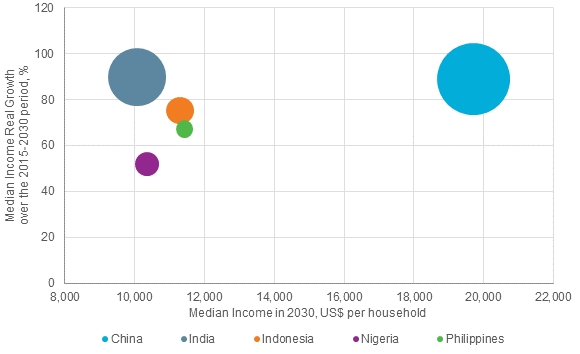 1. China: Set to remain the world’s largest middle class by 2030

Despite its slowing economy, China remains a potent lure for multinationals and there will be plenty of opportunities for businesses looking to target the country’s middle class consumers with rapidly rising purchasing power. In 2014, the number of middle class households – defined as those with between 75.0% and 125% of median income – stood at 112 million, which made China’s middle class the world’s largest. By 2030, the Chinese middle class is expected to keep its top rank, as it will swell to 137 million households.

What is more, China is expected to enjoy robust median income gain over the long term. Euromonitor International forecasts that during the 2015-2030 period, the median disposable income in China will grow by 89.0% in real terms to reach US$19,709 (in constant 2014 prices) per household – an income which will give Chinese middle class households significant capacity for discretionary spending.

India is projected to be among the top five countries with the fastest real gains in median income (with the other four being the far smaller economies of Turkmenistan, Uzbekistan, Georgia and Lithuania). Over the 2015-2030 period, the Indian median income per household is set to increase by 89.8% in real terms to reach US$10,073 (in constant 2014 prices) by the end of that period. This level of median income will not only give the Indian middle class a discretionary spending power, but will also help to transform the country’s consumer market from a “bottom of the pyramid” market towards a middle class consumer market with greater and more sophisticated demand.

By 2030, the number of middle class households in India will exceed 90 million (up from 74 million in 2014), which means that India will keep its current rank as the world’s second largest middle class. However, the fact that India’s middle class of 2030 will remain smaller than that of China in 2014 suggests that there will still be considerable room for the Indian middle class to grow and the need to improve the distribution of income in India.

Indonesia has the world’s fourth largest middle class with 17.3 million households as of 2014, behind the USA at 25.3 million, India at 74 million, and China at 112 million. Besides its large size, what makes the country’s middle class so full of potential is the fact that middle class purchasing power in Indonesia is set to rise strongly, which will give Indonesian middle class households considerably more room for discretionary spending and a reason to be optimistic about the future. Euromonitor International forecasts that Indonesia’s median disposable income will reach US$11,300 (in constant 2014 prices) per household, up from US$6,300 per household in 2014. Meanwhile, the country’s middle class will expand to around 20 million households by 2030, which will create an important consumer base to drive demand and spending in the country. Businesses targeting the Indonesian middle class consumer can expect the greatest opportunities in health goods and medical services, leisure and recreation, and hotel and catering.

The fact that Nigeria has the largest population, economy and consumer market in a rising Africa makes the country a prime spot for businesses seeking to tap into Africa’s imminent boom in consumer spending. On top of this, Nigeria is expected to have the world’s second fastest-growing middle class (behind Guatemala), as the number of middle class households in the country is set to rise from around 10 million in 2015 to nearly 15 million in 2030.

Euromonitor International forecasts that in the period through to 2030, the Nigerian middle class will raise their spending the most on communications, which reflects Nigeria’s vibrant telecom scene with urban middle class consumers increasing their 3G and 4G uptake. Followed by some considerable distance, other categories with strong middle-class consumer spending over the 2015-2030 period will include leisure and recreation as well as health goods and medical services.

On the back of stable economic growth and improved distribution of income, the number of middle class households in the Philippines is set to grow by 41.8% between 2015 and 2030 to reach 8.4 million by 2030. This forecast growth puts the Philippines among the top ten countries with the fastest rates of middle class expansion for the 2015-2030 period. Furthermore, Filipino middle class households are on course to enjoy an enhanced capacity for discretionary spending, as the  median disposable income in the country is set to reach US$11,429 (in constant 2014 prices) per household in 2030, representing a significant 70.0% real gain from US$6,710 in 2014. With their rising purchasing power, the Filipino middle class will increase their spending the most on leisure and recreation, health goods and medical services, and education over the period of 2015-2030.

Learn more about the global middle class in our free survey extract.