The National Restaurant Association (NRA) Show took place in Chicago from May 16 to 20. The show and its BAR event hosted attendees from around the world who saw the latest in packaged foods, hot and soft drinks, alcoholic drinks, cooking equipment, and software for the restaurant industry. Below are the top 5 food trends that the Euromonitor research team of Emily Balsamo and Virginia Lee observed.

1. 3-D Printing: With the increase in foodies posting food and beverage photos on Instagram, Twitter, and Facebook, there is more pressure on chefs and mixologists to create an eye-popping entree or cocktail. Enter the 3-D culinary printer that can print out multi-coloured candy orchids and sugar skulls to decorate cakes and drinks. 3D Systems used its ChefJetPro food printer to print edible sugar objects on the show floor.

2. Ancient Grains: Amaranth, buckwheat, Kamut, millet, quinoa, and spelt have been growing in popularity in the US and companies are trying to capitalize on that trend.  Quinoa is one the most popular ancient grains with gluten-free positioning and high protein content making it appealing for multiple eating occasions. For example, yoghurt maker Chobani featured their Chobani Oats Ancient Grain Blend that includes amaranth and buckwheat in addition to steel-cut oats and chia. Atalanta Corporation positioned its Del Destino Ready to Eat Quinoa Salads as a quick, high-protein, vegetarian meal. PepsiCo introduced a quinoa variety of its Quaker Granola Bars to appeal to healthy snackers. While wheat has declined in popularity to the gluten-free trend, Americans have embraced ancient grains because those whole grains are high in fibre and minerals. 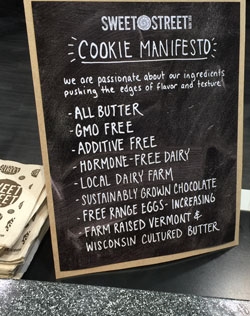 3. Fat is Back: Real butter is back in favour as Americans embrace its creamy and rich taste.  As low-fat diets have faded and concerns about artificial ingredients grow, consumers are choosing the purity of butter instead of man-made margarine. The Sweet Street Desserts booth placed a “Cookie Manifesto” sign in front of their cookies. Their cookies are made with all butter – “farm raised Vermont & Wisconsin cultured butter”. Even whole milk is making a comeback as Stonyfield Farm featured their new Oh My Yog! Yoghurts made with whole milk and include three layers with a cream top.

4.  Gluten-Free: Gluten-free continues its reign in 2015, this year with even more abundance of better tasting and higher quality offerings. With Udi’s striking a deal with Pizza Hut to supply gluten-free crusts across the country and other major pizza chains such as Domino’s securing a gluten-free certification for their crusts, the trend has truly gone mainstream. The only barrier at this point which industry players are highly aware of, is making gluten-free products taste as good as gluten counterparts. Smart Flour Foods uses ancient grains (sorghum, amaranth and teff) instead of rice to avoid the poor taste many associate with gluten-free foods. Gluten-free pastas were also more visible this year than in the past, with companies like Explore Asian promoting ready to eat meals such as black bean spaghetti with Thai red curry sauce. As it has been in the past, gluten-free was again seen in products that cater to other dietary restrictions as well. Companies like Daiya, Gardein, and Hail Merry touted products that are free of gluten, soy, dairy, and animal products all together.

5. Sustainable Aquaculture: Several exhibitors at this year’s show were committed to busting the myth of aquaculture being necessarily unsustainable. As chef/author Barton Seaver said during his session entitled, “Domestic Aquaculture: the biggest opportunity in food today,” “We venerate the farmer but vilify the fisherman. Why?” He suggested that restaurants, in order to maximize profitability and food quality, need to shift their paradigm as far as supply and demand. Restaurants should not demand what they want from suppliers, but instead, should take what suppliers are offering. Fish suppliers such as Airfresh Seafood, American Indian Foods, and even Trident, also spoke of moving towards a system in which restaurants work with what is available rather than demanding what may not be. Seaver did not show an overarching preference towards neither wild caught or farmed. He believes both methods can be sustainable if done right, and both can lead to environmental degradation if not.