The world over we see technology connecting lives and changing the way consumers behave. While the focus has largely been on emerging markets with their large consumer base, young population and evolving digital landscape, a number of developed markets provide enormous growth potential as well. The digital environment in the developed world is, admittedly, far more advanced than in emerging nations. Most households have fixed and mobile broadband and digital commerce is on a strong footing. Yet, there exists whitespots across nations where services access is low and quality of services is patchy with slow internet speeds. These markets offer the best scope for growth.

Based on a variety of digital landscape indicators such as internet users, household broadband penetration and mobile internet subscriptions, below is a list of the top five developed markets that Euromonitor International forecasts to have the greatest digital potential in the coming 15 years: 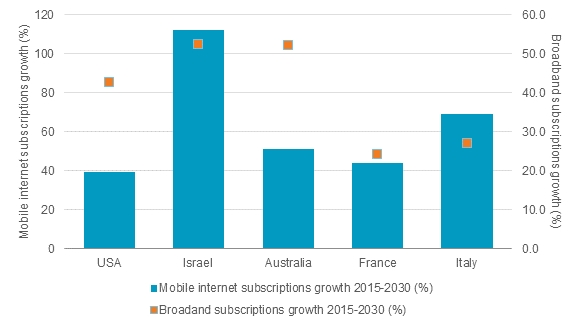 Home to the largest telecom market globally, the USA is a pioneer in tech innovation in a host of new-age digital services. The sheer size of the market and large consumer base with pockets of low rural telecom connectivity is attractive for investors. Over the period 2015-2030, the country is expected to account for one-third of absolute additions in mobile internet subscriptions in the developed world. Internet usage will also grow at some of the fastest rates among developed nations over the next 15 years. Verizon has been collaborating with rural operators for its LTE for Rural America (LRA) programme, which aims to increase 4G LTE coverage in rural areas. The National Broadband Plan, which was launched in 2010, has provided an impetus to fibre investments as well.

Challenges: Despite the obvious appeal of the market, services uptake among the poorest consumers remains low due to high income inequality. This is especially so for fixed-broadband penetration which is lower than the developed world average. While a persistently skewed income distribution is a challenge, healthy economic growth and a robust investment roadmap augur well for the future.

Israel has earned a reputation for being a global innovation hub with a vibrant tech start-up landscape. Despite the relatively small size of the telecom market, the country attracts significant investment in digital technologies including cloud computing. The Digital Israel project, which was approved by the government in 2013, aims to implement nationwide fibre-optics coverage and provide peak download speeds of 1.0Gb/s. This, coupled with wholesale market reforms and network-sharing, will enhance competition in the broadband segment and lead to one of the fastest increases in household broadband penetration in the developed world over 2015-2030. Going ahead, the country is also expected to be a growth leader in mobile internet subscriptions among the developed world due to 4G LTE investments.

Challenges: Growing income inequality is reflected in low fixed-broadband penetration among the poorest households. Israel’s location in a region which continues to experience political instability and military conflicts is also a threat for the further advancement of the telecom sector.

Sound regulations and competition are the hallmarks of Australian telecom. Affluent, tech-savvy consumers have also driven growth in digital commerce and the country serves as a testing ground for the latest digital technologies. Despite widespread coverage of broadband internet and cellular data services in cities, network expansion in sparsely populated rural regions remains a key issue. Moreover, the country lags behind the developed world in terms of broadband speeds and high prices for those services. The government is implementing the National Broadband Network (NBN), which aims to provide broadband connections with speeds of up to 100Mb/s to all households by 2020. This is expected to translate into one of the fastest growth in broadband subscribers in the developed world over 2015-2030.

Challenges: While Australia is known for its efficient implementation of public projects, the NBN has faced issues surrounding technology deployment and its impact on cost and speed. As of Q1 2016, there were over 900,000 active users, but internet speeds were still slow as per the World Economic Forum’s Networked Readiness Index 2016.

France is one of the largest telecom markets in Western Europe. Economic growth is picking up, the telecom landscape is competitive and investments in mobile broadband and IPTV services are growing. However, rural centres face connectivity issues and the government has looked to increase digital access in these regions. The government’s Plan Très Haut Débit aims to provide next generation broadband (speeds of atleast 30.0Mb/s) nationwide by 2022, primarily through fibre-optics. The ‘Loi Macron’ economic reform plan of the Hollande administration stresses on 3G and 4G coverage in underserved municipalities by 2017. The country will figure in the top five developed markets in terms of absolute increase in mobile internet subscribers over 2015-2030.

Challenges: France continues to suffer from high unemployment, which impedes services uptake among the poorest consumers. The eurozone’s economic weakness and its potential negative impact on the domestic economy coupled with the growing threat of religious extremism might affect investments.

Italy has long been characterised by an economic divide between the prosperous north and poorer south. This is reflected in the existing digital divide with the country figuring at the bottom of the developed world in terms of internet penetration and household broadband access well below the developed world average as of 2015. Going ahead, the government intends to make public investments worth US$4.5 billion to rollout broadband services in underserved areas. The aim is to cover 85.0% of households with a connection of at least 100Mb/s by 2020. The project will also complement ongoing investments by other private operators. In the mobile space, operators are investing in advanced LTE services, thereby boosting growth in mobile internet subscriptions and digital commerce.

Challenges: The greatest challenge for Italy is economic turmoil and high unemployment, especially among the youth and poorest households. High bad debts have undermined the banks with negative repercussions on the economy. This might continue to impede services uptake and accentuate the digital divide.