Uncertainty is going to be the dominant theme in the global economy in 2017. Continuing political, policy, and economic volatility around the world pose risks of further inertia due to a “wait-and-see” sentiment in the private and public sectors. Global companies should be ready for more disruptions that might arise given the geopolitical uncertainty and financial market volatility in developed and emerging countries.

Top three trends for Economy, Finance and Trade to watch in 2017 are:

Unfolding uncertainty after the US elections with global spillovers

The victory of Donald Trump in the US presidential elections is yet another political shock to the economies of the developed world. There is an unusual amount of uncertainty about Trump's actual policies in 2017. The US congress and senate might moderate some of controversial trade and immigration policies, but Trump’s actions so far suggest that it might prove to be difficult. If fully implemented Trump’s planned policies could significantly boost the risks of a more severe US slowdown or a more general stagnation of the global economy:

Real GDP y-o-y Growth Forecast in the US Under Different Scenarios: 2016-2018

The USA is not the only country to witness the rise of anti-trade and anti-immigrant populism. Right-wing parties are gaining ground across Europe, which adds up to significant political uncertainty:

A broader advanced economies' stagnation would notably hurt the outlook of European countries. The spread of political populism across the region would slowdown the implementation of structural reforms and raise private sector pessimism, resulting in negative spillovers on investment and consumer spending.

High credit growth is anticipated to persist in China during 2017, despite the recently introduced government’s measures to fight excessive debt levels. China's private non-financial sector debt to GDP was estimated at over 200% in mid-2016, rising nearly two times faster than country’s GDP. Bad loans are a particular cause for concern adding to a high probability of a banking crisis over the next three years. The government has recently started taking actions to tackle the growing amount of debt:

While the new governmental policy statements may restrain some of the excess lending, they are unlikely to be enough to stabilise China's credit markets. 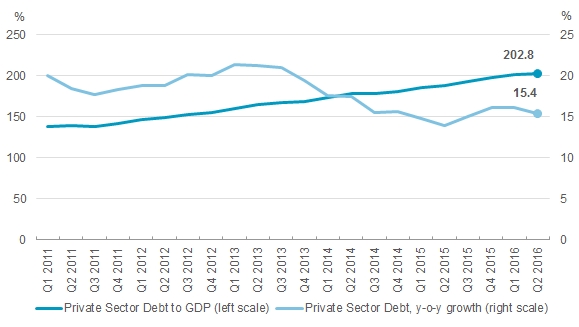