The shock vote to elect Donald Trump by the American people as the next US President on 8 November 2016 has caused global stock markets to fall and the US dollar to weaken.

The declining dollar in response to the increased levels of uncertainty surrounding future economic policies will act as a drag on outbound US travel, however, will stimulate increased demand for domestic tourism, as Americans will have less discretionary income as the US economy decelerates, making the staycation a more affordable travel option to many.

Travel and tourism is directly impacted by government policies and the travel industry will be looking to ensure that the pro-tourism initiatives set in place, such as establishing Brand USA and the Visa Waiver programme for select countries by the Obama administration, will continue to reap benefits in terms of increased international tourism demand. Moves to tighten entry to the US whether by country or on an ethnic basis will constrain growth.

The International Trade Administration forecasts that Mexico will become the US’s source market in 2016 in terms of trips, however, Canada will remain the largest source of inbound spending as Canadians spend 50% more than their Mexican counterparts. (Canada inbound spend per trip USD1,400 vs USD920 for Mexico, 2016)

The mid to long term forecast for Mexican trips to the US may need to be revised if there were to be changes to immigration once Mr Trump takes over as President and starts his term. At the moment, it is not clear what the policies will be.

Trade and immigration on the agenda

Any changes to existing trading agreements set in place, such as NAFTA, will have a bearing on potential tourism due to the inter-connected nature of source-destination economies and how economic performance is a critical driver of outbound tourism demand.

According to a Trump Downturn scenario developed by Euromonitor Analytics, this would lead the US into recession in 2017 and 2018 and this would have a knock-on effect on the Mexican economy, due to their close trading links, which would result in a reduction of 0.8% and 0.2% GDP growth for Mexico compared to the baseline forecast GDP % growth.

Trump Downturn Scenario for the US 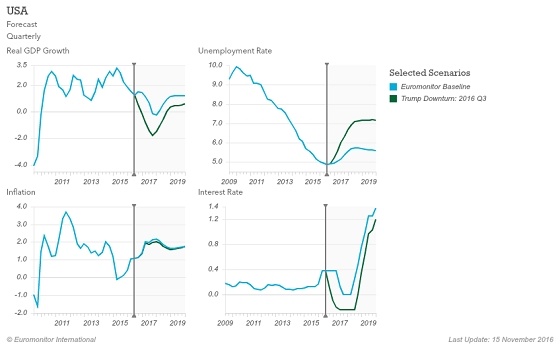 The impact on inbound demand from the Middle East will very much be determined by the travel policies that the Trump Presidency will instruct the Dept of Homeland Security to introduce.

The Council on Foreign Relations estimates that a potential travel ban on Muslims to the US could cost up to USD71 billion per year and up to 132,000 jobs.

Watching from the sidelines

How the rest of the world views the US and its openness to trade and tourism depends on the main messages that come out from the new President once he takes office. He has a travel and leisure background, owning hotels, casinos and golf courses, so he understands the importance of investing in infrastructure as well as the need for connectivity with other countries.

The US means much more than its current President and government. The US has done a really great job of promoting its culture and heritage, and has a multitude of iconic brands, with FutureBrand’s index showing that eight out of the top 10 global brands are from the US, including Apple, Amazon, Microsoft and Facebook.

In terms of destination branding, the US ranks seventh according to FutureBrand after Japan, Switzerland, Germany, Sweden, Canada and Norway. It will be important for Brand USA to ensure that consumer sentiment remains high, despite the new political leadership.

After Brexit and the 30 year low in the sterling rate to the dollar, it was anticipated that Americans would take advantage of the exchange rate to visit the UK which is now more value for money.

Currency is a factor in determining outbound travel choices, however, the performance of the US economy will have a greater bearing on Americans travelling abroad. If the US enters into recession, this will lead to a downturn in outbound travel.

During the Great Recession, we saw that the staycation effect was prevalent in many countries, especially the US, where Americans opted for domestic trips over international trips during times of economic uncertainty.

Domestic tourism is likely to be benefit from a weaker dollar and a potential economic slowdown that may turn into a recession. However, during the Great Recession, domestic trips fell, but not as much as outbound trips, so a similar trend was visible but the negative impact was felt more on the outbound side.

It is too early to say. It is a historic agreement so it is unlikely that it will be overturned and many US travel companies, such as airlines and hotel companies, have committed to the Cuban market. If Trump is willing to listen to the global travel industry that support the opening up of Cuba and the restoring of diplomatic ties between the two countries, then the impact may be negligible.

However, if Trump takes a hard-line view on Cuba and reverses the decision to normalise relations then travel restrictions will begin to be reinforced again and the situation will revert back to the status quo of the past few decades. This would ultimately mean that Cuba would not fulfil its tourism potential.

The general consensus from the travel industry is that Trump is a businessman who understands the travel industry and so that should work in the industry’s favour during negotiations with government. Trump campaigned with a pledge to invest USD1 trillion in much-needed infrastructure to overhaul the US transport network, amongst other areas. This would go some way to appease disgruntled domestic travellers.

Experience More In The Next Normal

How Three of the Top Global Consumer Trends Are Impacting the Way We Eat, Pay and Travel

What Next for Airline Players in the Post-Covid Business Environment?

No major player in the travel industry has escaped the impact of the travel restrictions resultant from the on-going global pandemic. However the impact has…

Physical space has been undergoing drastic changes as a result of the huge shift towards e-commerce, adoption of new technology as well as the impact of the…