The baseline outlook for the global economy has stabilised since President Trump’s election, with world GDP growth likely to increase from 3.1% in 2016 to 3.4% in 2017 and 3.5% in 2018. This baseline assumes a modest impact of President Trump’s policies on the global economy, taking into account his more moderate tone on trade in recent speeches and comments, together with the growing strength of members of his inner circle with more mainstream views. The first meeting between Trump and his Chinese counterpart President Xi Jinping in early April also went more smoothly than expected, making a trade war between the two countries less likely.

Nevertheless, Trump’s unpredictability implies that policy risks remain. Therefore, we have developed the “Trump Adverse Policies” scenario, as a worst-case if some of the more extreme campaign promises are implemented. The scenario combines the following elements: 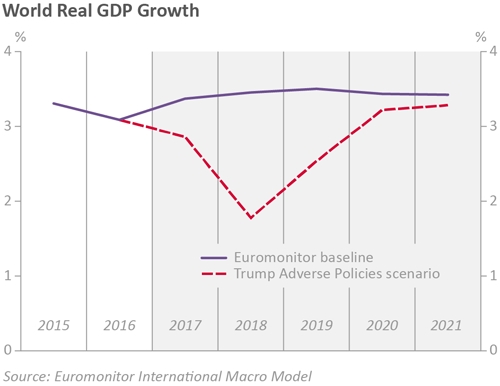 A trade-war between the US, Asian countries and Mexico

President Trump raises tariffs on Chinese imports to 45%. Import tariff on other Asian economies also rise by 15-20%. Trump pulls the US out of NAFTA and renegotiates a separate trade agreement with Canada, keeping relatively low US-Canada trade barriers. However, he raises tariffs on Mexican imports to 35%. The countries subject to higher US tariffs retaliate with approximately symmetric tariff increases on US imports.

Higher import tariffs reduce US consumer spending and increase distortions in the economy by forcing households and businesses to switch to more costly domestic substitutes. Higher production costs and lower exports lead in turn to a decline in business investment. Overall, the trade war reduces US long-term GDP by more than 2%.

Asian economies and Mexico suffer significantly from declining exports to the US, despite the depreciation of their currencies against the USD and some substitution into other markets. The imposition of higher tariffs on US imports dampens some of these effects by increasing demand for domestic output, but at the same time it reduces consumer spending.

A partial expulsion of illegal immigrants and stricter immigration controls

Stricter enforcement of immigration policies together with new legislation leads to a decline of around 50% in the number of illegal immigrants living in the US. The reduction in labour supply increases costs for employers and discourages production in agriculture and other sectors. This reduces long-term GDP in the US by 2%.

Stock market investors also become more pessimistic on the US economy under Trump’s policies. As a result, a major sell-off leads to a decline of 30-40% in stock market prices. The negative shocks to private sector confidence and credit availability lead to further cuts in consumer spending and business investment.

The increase in import prices and the higher costs of low skilled labour raise US annual inflation to 2.8% in 2018. As a result, despite the large decline in economic activity the Federal Reserve’s response is weak, with The Fed funds rate roughly unchanged. The combination of financial, private sector confidence, trade and labour supply shocks cause the US to enter a recession in 2018-2019, reducing average annual GDP growth by 1.4 percentage points over five years. 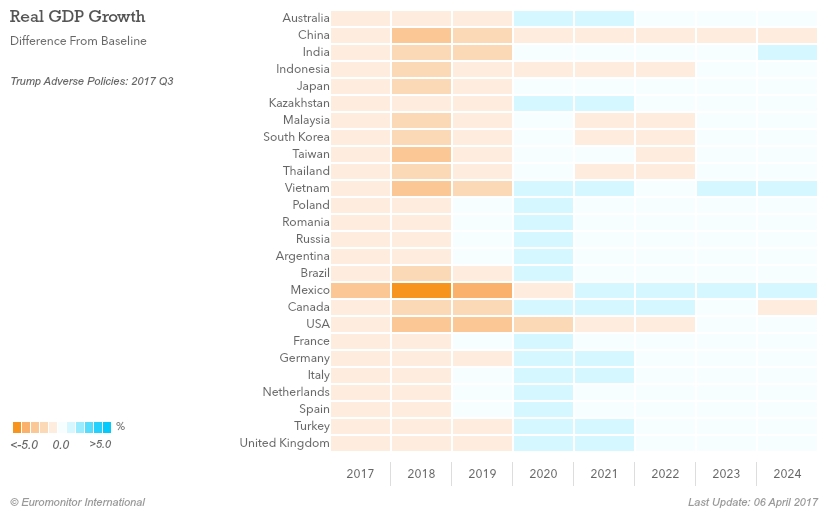 The trade war with the US and the spill-overs from lower US aggregate demand also reduce average annual GDP growth in Asian economies by 0.6-1.1 percentage points over five years. Annual growth in China declines below 5% in 2018-2019. Mexico’s economy enters a deep recession in 2017-2019 due the slump in trade with the US and in remittances from migrant workers, with output declining 14% below the baseline forecast over five years.