Faced with lacklustre market prospects in fragrances, several players are actively engaging in radical novel concepts in their bid to drive a fundamental change in the way fragrance players compete. Seemingly, such new concepts target a select group of affluent perfume aficionados who are likely to try original product novelties and brand themselves as lead adopters. Provided these succeed with the trendsetters, is it possible that alternative fragrance concepts stimulate interest and trickle down to the mainstream market? Below we elaborate on three new emerging concepts.

A fragrance-inspired cocktail is not the first alcoholic beverage that springs to mind when ordering a drink at a bar. However, LVMH’s Givenchy fragrance house has teamed up with London’s prestigious Hotel Café Royal to develop its line of cocktails that mirrors the exclusive collection L’Atelier de Givenchy launched in 2014.

Presumably the outcome of synergetic competencies derived from LVMH’s champagne business, the cocktails have been carefully mixed to reflect the scent notes that compose each of the fragrances in the collection. Priced at £13 each, which is roughly double the price charged for a cocktail in a standard London bar, this holds the potential to sprout beyond the luxury territory.

One of Givenchy’s aims with its cocktail collection is to provide consumers with a unique sensorial experience upon sipping one of its drinks, while relating it to the fragrance its mirrors. Such an undertaking conceivably sparks an alternative form of collaboration or partnering – perfume brands with public bars through the development of new concept bars, new services within and the addition of fragrance-branded cocktails to the drinks menu.

This provides industry players with a differentiation strategy by adopting a niche dimension by way of product diversification. Mainstream players could strengthen their brand recognition and bring in new revenue streams while potentially help revitalise the fragrance market. This would require a creative streak that evokes consumer curiosity, however, as well as being available at prices competitive with standard cocktails. 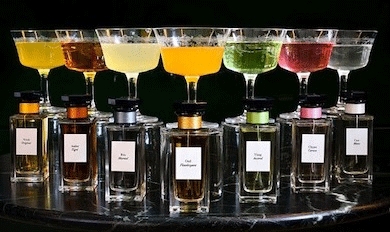 In light of Euromonitor International data that reveal that the number of independent bar/pub outlets in Western Europe is forecast to decline by nearly 6,000 at a -0.3% CAGR over 2013-2018, collaboration between fragrance houses and public bars can be a mutually beneficial opportunity. Vanilla concepts contribute to this decline both in fragrances and public bars. Alternatively, creativity is what will allow both areas to survive and thrive.

Hugo Boss took a less radical approach than Givenchy, which could, however, be a potential fix to the unisex fragrance category, on the wane in developed markets. Euromonitor International data show how the tiny unisex fragrances category in Western Europe and North America combined generated just 1.6% of total fragrances in 2013, which is expected to dip further to 1.4% in 2018, showing the unfaltering future dominance of gender-specific positioned fragrances.

In January 2015, Hugo Boss Woman was launched with a composition that combines female and traditional male notes, including traditionally masculine scents of sandalwood and spicy Indian black tea, suggesting a new olfactory trend. The creation of androgynous women’s perfumes could work better for players who do not wish to abandon their unisex business but can revive their unisex lines by repositioning them.

Scent gadgetry – has it got marketable magnetism?

Google has utilised its hi-tech credentials to develop a new medium of scent delivery to the consumer. This time it is not about the bottle design but about convenience. Google’s wearable body odour detection device releases scent upon sensing a body rise in temperature. This could stir interest among fragrance and deodorant players to partner with technology companies to develop their own branded and patented smart gadgets that potentially rival Google’s, with superior efficacy in terms of protection and masking body odour, and wider choice of scent notes.

Such devices (including modifications beyond Google’s invention) hold the potential to tap into white spaces such as smokers and after-work event-goers. What is cynical about this gadget is its ability to be mass-marketed at affordable prices, especially when weighed against potential consumer demand. The device could be an attractive option to high-volume deodorant users, especially where fragrance remains unaffordable, but only if it is a low-cost fragrance alternative.

Conversely, if the gadget commands a premium, it is likely to remain the domain of affluent niche consumers, who would desire a fragrance top-up and/or sweat prevention device on busy days. However, it is unlikely to attract the interest of physically active consumers, as preference is likely to remain for a post-workout shower over a device that disguises body odour.

While innovative ideas initially tend to target a select consumer base, they could also be indicative of broader opportunities for the mainstream market via differentiated and lower-cost offers. Industry players would need to reconsider ways how to instil further consumer interest not only with scent per se but also how fragrance is perceived.

There are three factors to be appraised. Firstly, to assess how workable, radical approaches such as Givenchy’s cocktail line are. Secondly, to re-evaluate long-standing and perhaps outdated ways of how some products are positioned, while conceiving of lateral repositioning manoeuvres. Finally, to synchronise product functionality with a sufficiently strong and durable demand from a targeted audience to make it a profitable idea.