Unilever’s eventful acquisition activity over the past two years has altered its standing in beauty and personal care. The company has acted not only to capture new revenue opportunities but also to reboot its growth in developed markets. Unilever generated 40% of 2015 sales from developed markets, down from 49% in 2010. Over 2010-2015, it posted a CAGR of 12.8% in developing markets, which is three times faster than in developed markets.

Unilever’s sales increasingly stem from developing countries, with Brazil, India and Indonesia accounting for the bulk of growth. Projected growth over 2015-2020 point to a CAGR of around 10% in Latin America and the Middle East and Africa, compared to a more lacklustre outlook in North America (3.1%) and Western Europe (1.4%). Prospects in premium beauty and personal care are however more dynamic in developed markets, mostly the US, and with what is primarily a mass brand portfolio, Unilever cannot expect to gain much. In addition, the fast growth witnessed in emerging markets is not recession-proof, making it crucial to market-align its product mix in order to enjoy the best of both worlds. 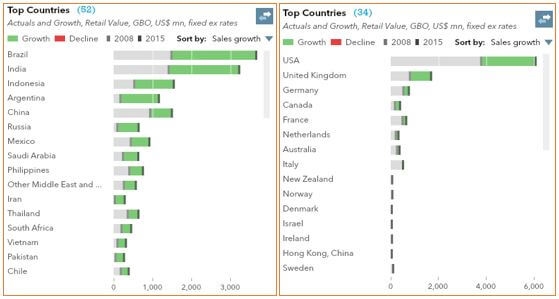 The Industry Forecast Model continues to exhibit downgrades in several emerging markets such as Brazil and Indonesia, which Unilever relies rather heavily on for revenue growth. The largest downgrades derive from the company’s core categories, mainly, men’s grooming, skin care and hair care. 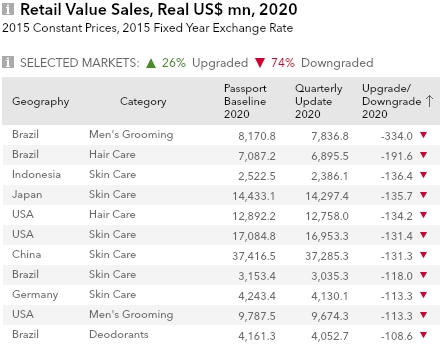 Unilever’s exposure to the global downgrades amount to US$561 million, on the basis of its market share in 2015 in the core 54 countries. Its heavy presence in the mass segment, which represented 89% of total industry sales in 2015 (excluding oral care and men’s shaving), impacts the company disproportionately. In Brazil, Unilever’s 2015 share stood at 12% and 20% in men’s grooming and hair care, respectively, while in Indonesia, it led skin care with 47%, hence weaker spending power is likely to dent the company’s expectations in these markets. This scenario makes it imperative to participate in resilient growth pockets in developed markets, notably, the premium and niche segments, to counter-balance growth losses elsewhere.

Acquisitions to salvage its business in developed markets

Unilever chose not to disregard the dynamic prospects in categories such as premium skin care and men’s toiletries, in particular, the US (both at over 4% CAGR over 2015-2020).

Driven by higher disposable incomes and correspondingly higher-priced products, niche labels are among the key drivers. While several categories witnessed a downgrade in the Forecast Model’s Q4 revision, several segments are expected to be buoyant including dermocosmetic, Korean and Californian brands, and indie/cult brands due to their unique value proposition. Unilever’s recent acquisitions fit these characteristics, including REN, Dermalogica, Murad, Kate Somerville and more recently Dollar Shave Club, a game-changer in the US’s men’s grooming category. These brands help the company to reinvigorate growth in the key US market, in time of waning demand in emerging markets.

Next in line should perhaps be colour cosmetics, which as affirmed by major industry players, including L’Oréal and Estée Lauder, is anticipated to fuel industry growth in the US, in particular, the premium segment, by a 6% CAGR other 2015-2020. Colour cosmetics is also among the categories to be upgraded in the Forecast Model’s Q4 upgrades, however marginal.

Unilever may want to bank on the equity of its acquired brands such as Kate Somerville, which benefits from its Californian image and dermocosmetic positioning, to extend in specialised make-up. Additionally, it could pursue further acquisitions, such as the UK’s Charlotte Tilbury. Since its September 2013 launch, it has become a disruptive brand, reaching US$5 million by 2015 in the UK, via its own store operations, and concessions in luxury department stores such as Harrods, while continuing with its pursuit of international expansion. These potential ventures would grant the company a fast-track entry into the category, while consolidating its premium portfolio.

Global Overview of the Energy Industry