With recent unsettling world events further undermining the consumer sense of safety, already challenged by home, child, personal and financial security concerns, the motivation to secure control over our lives is only intensifying as 2016 progresses. 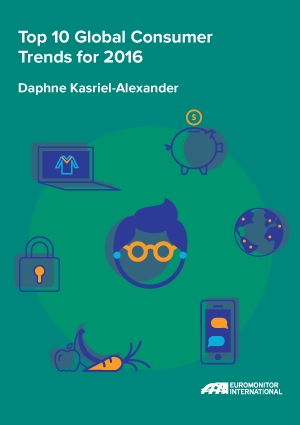 The need to recover a sense of order and strength is influencing many buying decisions and disparate consumer behaviour including ‘helicopter parenting’, the interest in smart homes and other digital solutions, where we holiday and the keenness to use fitness trackers.

In response, brands across all sectors are creating new products that promise to return a sense of being in control to consumers - many crowdfunded to be quick off the mark and test likely consumer interest.

Companies are recognising the need to rebuild trust by emphasising factors such as food safety, protection of privacy and a green and ethical pedigree for their products.

New products include perfumes that double as mosquito repellents against the backdrop of Zika Virus fears.

Even Facebook has activated its Safety Check feature asking if users in areas hit by terrorism wish to inform their Facebook friends that they are safe and sound. Digital life is indeed coming to the rescue through innovative security products such as Cocoon, a digital guard dog, but products and services more broadly are adapting to offer support and novelty. In Argentina, joining the circa 1,400 gated communities offering housing for affluent families worried about crime are themed options such as Terralagos, which attempts to mimic a Caribbean landscape and Venice, resembling the Italian city.

Consumers have expressed their willingness to be updated on product features while shopping. According to a 2015 survey commissioned by Internet World Germany, for instance, around three quarters of German consumers would like to use their smartphones while shopping instore, or are already doing so. German retailer, Metro, uses smart bar codes as part of its smartphone app, PRO Trace. Consumers can track a fillet of salmon sold in a store in Berlin to a fish farm off the coast of Norway. According to Metro’s corporate responsibility project manager, vom Stein: “It’s about trust. Our customers challenge us to offer sustainable and safe products”. The company is extending the app to include meat, and fresh fruit and vegetables.

New handheld, compact FoodSniffer gadget checks whether uncooked meat and fish is still safe to eat past its use-by date - potentially saving consumers money while reassuring them. The device assesses the temperature and humidity of raw food and also detects ammonia or any dangerous organic compounds lurking in it that are undetectable to the human nose.

Digital life to the rescue

A plethora of digital products have been promoted in 2016 to assuage consumer security concerns. One of these is a crowdfunded home security device, Cocoon. Acting as a digital guard dog, it listens out for atypical sounds in a home when its occupants are out, and alerts their smartphone with a video clip if it detects anything unexpected. This home security device is fitted with low frequency listening technology and an HD video camera. "The device is all about making people feel safe in their homes" Sanjay Parekh, a co-founder of the start-up behind the innovative security system told Telegraph Online. The size of a tennis ball, the security device sits in a main thoroughfare of a home and canhear sounds inaudible to the human ear including movement through walls and ceilings.

WellBe is a new stress tracking bracelet claiming to “Convert Stress into Calmness”. Reflecting the consumer interest in mental wellbeing as well as physical fitness, this wearable device immediately alerts wearers when they are in situations and around people that increase their stress levels. This tracking bracelet uses heart rate sensors and algorithms to understand triggers and formulate personalized programmes to instantly restore calmness. The accompanying app offers a menu of mindfulness exercises such as focused breathing and personalized programmes and playlists. “The WellBe measures the changes in your stress/calmness levels while practicing the different stress release exercises, allowing users to see the 'before and after' effect of each program you practice” WellBe shared in aKickstarter campaign.

Existing services are also keen to showcase security upgrades. The message on the WhatsApp security screen, following the company’s recent introduction of end-to-end encryption, is “Privacy and Security is in our DNA”. Customers are reassured that “No one can see inside that message. Not cybercriminals. Not hackers. Not oppressive regimes. Not even us”.

Perfume that doubles as mosquito repellant

With worries about the Zika Virus even causing some athletes to withdraw from The Olympic Games in Rio this year, perfumes that double as mosquito repellents are having a moment.

Coqui Coqui, the fragrance line of the Mexican boutique hotel group of the same name has started producing a citrus mosquito repellent packaged like its high-end perfumes which is often sold out. The creators of Aromaflage, a perfume-repellent hybrid line which offers a lab-refined version of natural oils traditionally applied in Asia, have been fielding daily questions about the Zika Virus through their customer service channels. Co-founder Michael Fensterstock reported a 100% rise in sales since last summer. Jessica Richards, the founder of Shen Beauty in Brooklyn imports British product, Mrs White’s Unstung Hero Anti-Mosquito Eau de Cologne, also reporting a doubling of sales this season. “Zika is freaking everybody out. I have moms come in asking all sorts of questions and buying cases of 12” she told US journalist Bea Shapiro in July 2016.

Consumers are also keen on shopping for self-control. This may explain interest in an Israeli start-up’s product, The Right Cup, which gives out a fruity taste and aroma, creating an illusion tricking the brain into thinking that the water drunk is a flavoured beverage. Crowdfunding on Indiegogo, interested consumer backers have already helped the company double its target.