Congestion and air pollution have long been the source of countless problems in urban societies – from deterring investment to increasing the occurrence of chronic respiratory ailments. In an age synonymous with rapid technological innovation, smart urban solutions are laying the foundation for new mobility options. Many developed cities are aiming to transform their traditional urban mobility system, which has long been characterised by high automobile use, to one that aims to take on a more eco-friendly approach through the use of smartphone-integrated transport solutions. Despite this, some cities in the developed world are still beset by significant levels of vehicular congestion and air pollution. This article looks at how consumer preferences are likely to change in cities which actively seek to turn to alternative modes of transportation in an effort to reduce pollution and congestion. It is a spin-off to our upcoming Strategy Briefing 'How Urban Transport Shapes Consumer Lifestyles'. 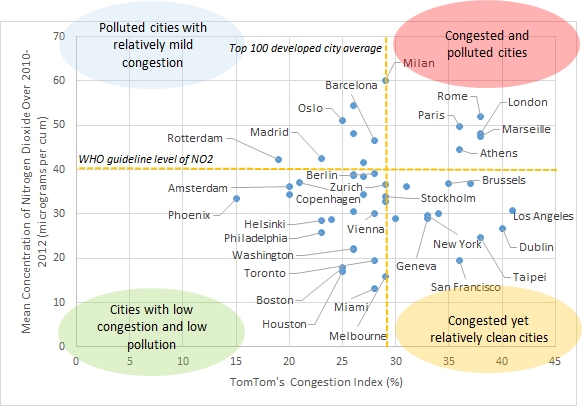 According to the European Commission’s 2007 Green Paper: Towards a New Culture for Urban Mobility , around 40% of all CO2 emissions arise from urban traffic, whilst 70% of other emissions come from urban transport. Based on the World Health Organization’s guideline level of nitrogen dioxide and an average TomTom congestion rate of the top 100 developed cities, Euromonitor International’s analysis of the most congested and polluted points to six cities, namely London, Milan, Rome, Paris, Marseille and Athens. Pressure to alter urban mobility trends to reduce congestion and pollution are greatest in these cities.

In many developed cities smart urban solutions have become the new contemporary norm in helping to ease air pollution and congestion. Such solutions are seeking to progressively reduce the number of cars on city streets, replacing them with innovative smartphone-based mobility alternatives such as car- and bicycle-share schemes, which have popped up in cities such as Boston, Barcelona and Vilnius. However, some cities are adopting a more aggressive strategy. For example, by 2025, the Finnish capital of Helsinki is planning to introduce its “mobility on demand” solution, which will collectively group all shared forms of transport into one payment system and will provide users with an easy way to travel in and around the city with just a smartphone.

Other cities, such as Moscow and Copenhagen, have invested heavily in smart and intelligent traffic management systems. For example, in 2016, Copenhagen upgraded its old traffic lights with a new intelligent system, which, through the use of special sensors, gives priority to bus users and cyclists at road intersections, helping to reduce travel times by as much as 20%. Such innovative developments will form the basis for incorporating smart urban systems in highly congested and polluted cities, especially Rome and Athens, which boast some of the highest rates of car ownership worldwide.

Indeed, the automobile era that has dominated urban landscapes since the second half of the 20th century is slowly beginning to erode in light of changing lifestyles and mobility choices. For example, the increasing number of single-person households is making car ownership more of a personal luxury as opposed to a family necessity. Additionally, the re-emergence of the core urban area as aplace of work and residence is making car ownership less of an obligation, with shorter commute distances being better tackled by walking, cycling and public transport. Commercial investment in central locations will likely complement this trend with preferences for shopping, leisure and social life being increasingly focused around easy-to-access locations served by alternative mobility options. For example, some US cities such as Miami and Boston have witnessed an increase in the number of restaurants, shopping and entertainment venues popping up in locations that are best served through walking and/or public transport.