Trump’s surprise victory in the November presidential elections has significantly shifted the outlook for the US economy. Our initial post-election forecast was for a major downturn, leading to annual GDP growth of 0.4-0.7% in 2017-2018. The positive financial markets response in the last two weeks has led us to an upwards revision of these forecasts by 0.8 percentage points. Nevertheless, relative to August we have still downgraded our outlook. We are now expecting 1.2% GDP growth in 2017 and 1.5% growth in 2018 (down from 2.1% annually in the August forecast).This comes after an already disappointing economic performance in 2016, with GDP growth likely to be just 1.5% (1 percentage point lower than our forecast from November 2015).

The initial stock market increase in the US suggests that Trump will be just another pro-business, tax cutting, Republican president. However, the stock market’s rise in part reflects expectations of a higher share of GDP going to corporate profits and capital under a Republican government, rather than higher GDP. And Trump is no ordinary Republican. A literal implementation of his campaign promises on immigration and trade could lead to a 5% decline in the US’ labour force (assuming a full removal of undocumented migrants) and a trade war with China. These negative supply shocks could reduce the long-term potential output of the US economy by 5-10%.

On the upside, Trump’s policies include a major fiscal stimulus. His planned tax cuts amount to approximately 2.8% of the US’ annual output. There is a wide range of estimates of the multiplier effects of tax cuts on the level of GDP, but a reasonable baseline multiplier is around 0.5. This implies that Trump’s tax cuts could raise the level of GDP by 1.4%, once they are fully implemented. However, the size of the proposed tax cuts and the already large recent increases in US government debt levels imply stronger crowding out effects on the economy due to higher interest rates than for typically more moderate stimulus packages. 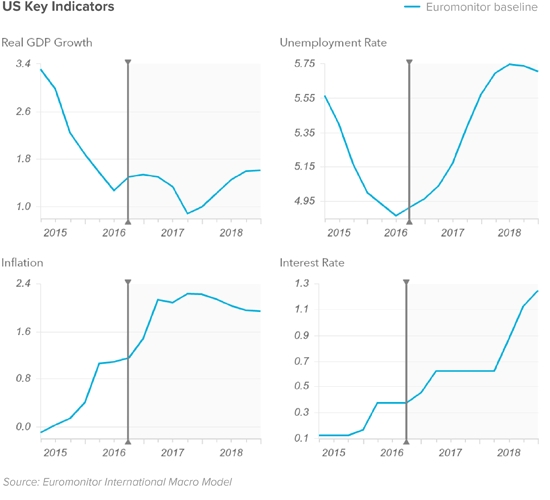 Furthermore, the Republican Congress is likely to offset a lot of Trump’s tax cuts with large social spending cuts (for example to Medicaid and food stamps programs). These are likely to act as a negative counter-stimulus, significantly reducing the spending power of lower income households with a high propensity to consume.

Trump has also announced a large infrastructure spending programme, with up to one trillion USD in spending over several years. However, this programme as well is probably much less stimulative than the headline number would suggest. The plan is to encourage private infrastructure investment, something which could be more wishful thinking for projects which are often unprofitable for the private sector. The actual government spending on this programme would be at most 150 billion USD over several years in the form of tax credits.

The Republican Congress is likely to moderate many of Trump’s planned tax cuts and other policies. However, a Trump administration could still implement significantly more protectionist trade measures and a partial expulsion of undocumented migrants to satisfy his electoral base. Congress would probably agree to at least some restrictions on immigrants and protectionist measures, to avoid seeming out of touch with the strong populist shift of Republican voters. Assuming 50% implementation, Trump’s policies are still likely to lead to a significant decline in US economic activity over the next five years.

There is an unusual amount of uncertainty about Trump’s actual policies starting in January 2017. It is possible that Trump ends up compensating for his lack of policy expertise by closely following the economic prescriptions of more experienced policymakers, such as House of Representatives Republican leader Paul Ryan. On the other hand, Trump’s self-confidence and personal anti-immigration and trade convictions, together with weak congressional opposition, may push him to implement many of his more extreme campaign promises. As a result we only assign our baseline forecast a 15-25% probability (compared to the usual 20-30%), with a roughly 50% probability that GDP growth in 2017 is between 0.4% and 2%. 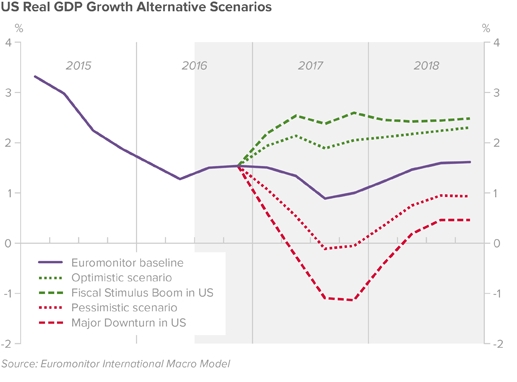 The most likely pessimistic scenario is a worse than expected impact of the rise in uncertainty after Trump’s victory, together with stronger negative effects of trade and immigration restrictions. This scenario leads to GDP growth of 0.4% in 2017 and 0.7% in 2018. We assign this scenario a 10-20% probability in 2017. These factors could also lead to a major downturn, with GDP falling by 0.5% in 2017 and stagnating in 2018. We assign the downturn scenario a 10-15% probability in 2017.

On the upside Trump’s actions may prove to be much milder than some of his campaign promises. His promised infrastructure spending and some of his tax cuts could also provide a more significant fiscal stimulus than expected. As a result GDP could increase by 2%-2.4% in 2017 and by 2.2-2.5% in 2018, depending on the size of the tax cuts and infrastructure spending, and the strength of monetary policy response. We assign these optimistic scenarios a 20-35% probability in 2017.

Consumption rebounded in the second quarter, rising 2.7% year-on-year (compared to 2.4% in the first quarter, and a long-term average growth estimate of 1.5-2%). Growth in durable and nondurable goods spending was particularly strong recently, while spending on services growth was closer to 2%. According to the preliminary estimate, consumption slowed down in the third quarter but was still rising at an annualised quarter-on-quarter rate of 2.1%.

Consumer confidence (based on the University of Michigan index) was declining in the second and third quarters, but a strong increase in November left it 2.7% higher than one year ago and moderately above its long-term average. Private sector employment growth has been steady at around 2%, maintaining the unemployment rate close to 5% (compared to a long-term unemployment rate estimate of 4.5-5%). Real (inflation adjusted) wages stagnated in the first half of 2016, but accelerated to a 2% annualised quarter-on-quarter rate in the third quarter (leaving them 1% higher than one year ago). Based on these factors, consumer spending was expected to continue growing at an annual rate of 2-2.5% before Trump’s election. The more negative outlook after Trump’s election suggests a growth rate closer to 1-1.5% in 2017. 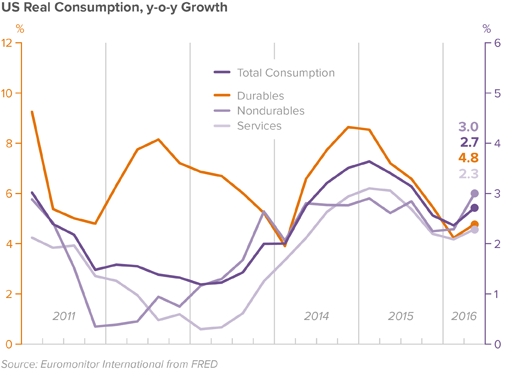 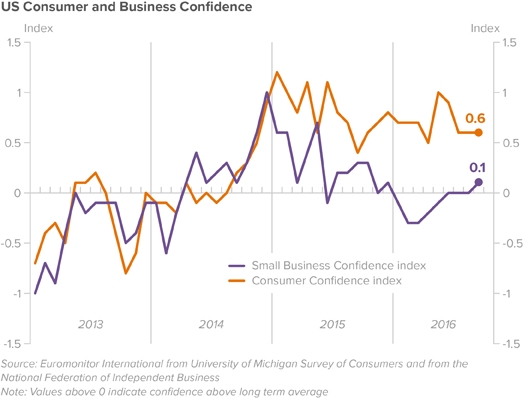 Business fixed investment increased slightly in the last three quarters. However, it is still lower than in 2015. Furthermore, the latest increase was concentrated in research and development, and other intellectual property investments. Investment in business structures and equipment continued to decline. Financing costs for business are low by historical standards, and high stock market valuations should also encourage investment. The outlook for the oil sector has improved due the boost to oil prices from the recent OPEC deal. Export growth has turned positive in the second quarter and third quarters, and is likely to improve further over the next year. However, business investment is still likely to contract in 2016. 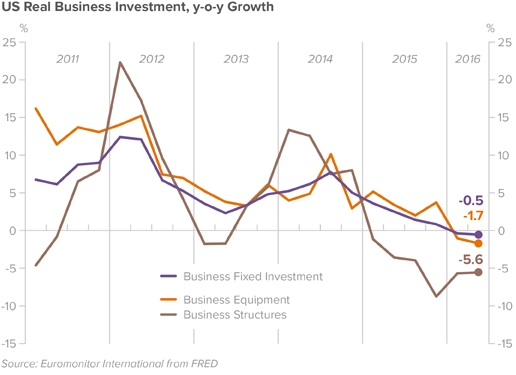 US employment growth has slowed slightly since the first half of 2015, though it is still close to 2%. Behind the aggregate figures, manufacturing employment has declined in 2016, while the number of services sector jobs has continued growing at a rate above 2%. The divergence in growth between manufacturing and service jobs reflects a resumption the long-term decline in the number in manufacturing jobs that preceded the financial crisis. The sector has 27% fewer jobs than in 2001. 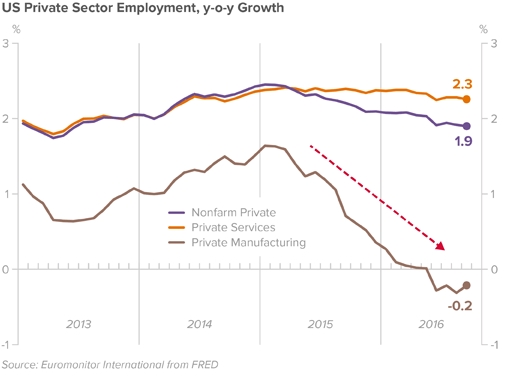 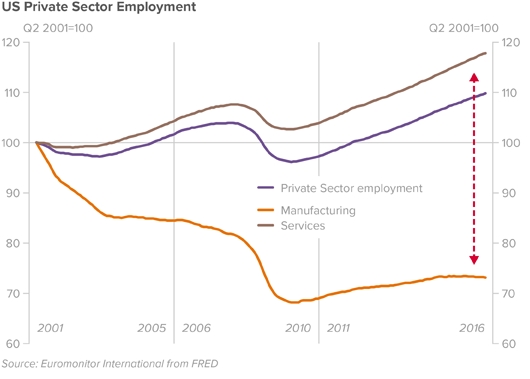 While the unemployment rate of 5% suggests a strong labour market, it is missing many discouraged workers who have dropped out of the labour force. Looking at one of the most robust measures of the health of US labour markets, the employment rate of prime age (25-54 year old workers) of 78% has increased by 3.2 percentage points from its great recession low, but it is still two percentage points lower than its 10-year pre great recession average. By this measure, the US labour market has recovered around 60% of its job losses from 2008-2009. 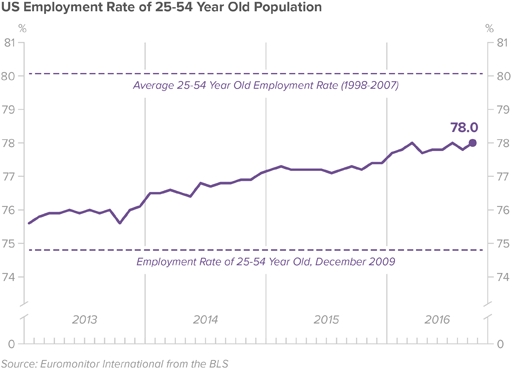 Labour productivity has stagnated since 2013 and has fallen so far in 2016. The lower investment levels since 2008 have hurt productivity. But the decline in productivity growth started before the financial crisis, largely due to lower returns to recent technological innovations. Ultimately, the slower productivity growth limits the potential for future wage increases, leading to lower consumer spending growth. Real (inflation-adjusted) wages have increased by 1% year-on-year in the third quarter, and are likely to continue growing at around 1-1.5% in 2017. 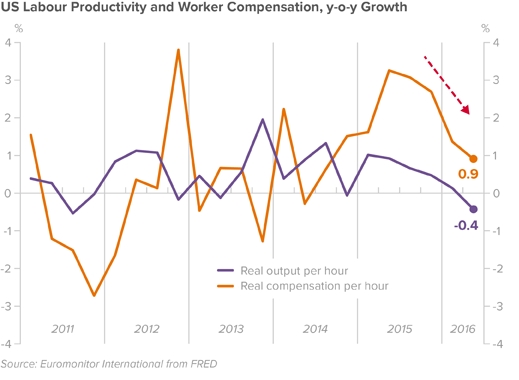 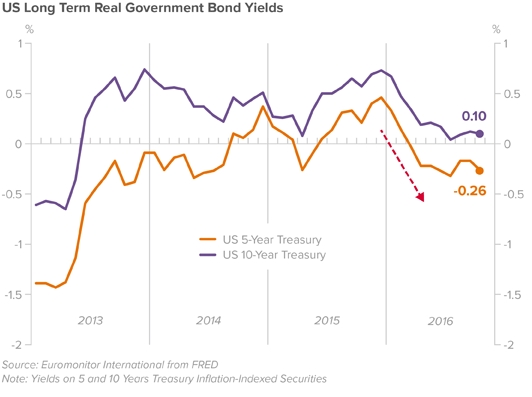 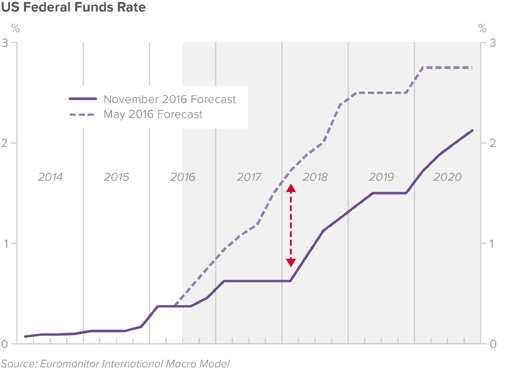 The prospects for much higher government debt levels under President Trump can also increase the risk premium on US government bonds, creating a bigger gap between short-term fed rates and long-term government borrowing rates. There is again a lot of uncertainty surrounding the baseline interest rate forecast. Our most likely pessimistic scenario for 2017 would imply a rate of 0.7% at the end of 2018. A more optimistic outlook, dominated by positive fiscal stimulus, would imply a Federal funds rate of 1.8% at the end of 2018. 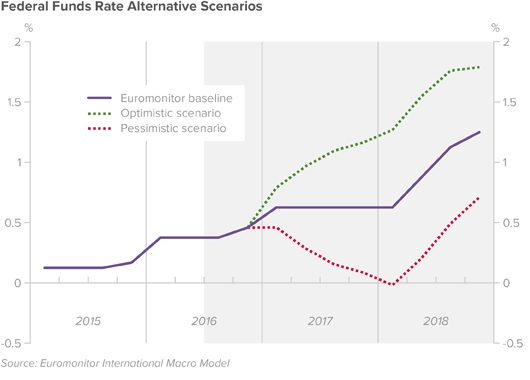