Vietnam posted the second largest absolute volume growth in Southeast Asia for major appliances after Indonesia, at 1.1 million units from 2008-2013. Leading manufacturers such as Panasonic Corp and LG Corp have increased their production capacities in Vietnam since 2013, to benefit from labour cost advantages, in addition to the geographical benefit of close proximity to key markets such as China, Japan and South Korea. Furthermore, with the coming of the AEC (Asean Economic Community) in 2015, leading manufacturers can use Vietnam as a free trade export hub to neighbouring countries such as Cambodia, Myanmar and Laos. 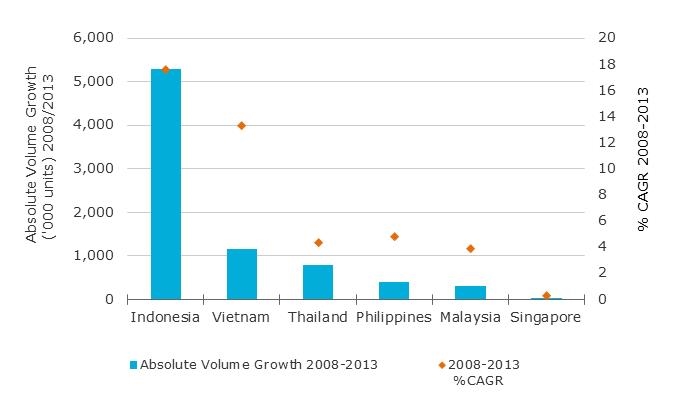 Why the high growth of major appliances in Vietnam?

Sales of major appliances in Vietnam are increasing in accordance with rising disposable incomes. According to Euromonitor International’s Country & Consumers data, household numbers in Vietnam with an annual disposable income of more than US$25,000 increased by 68% from 2008-2013. As a result, volume gains are being fuelled by new purchases, including a number of first-time buyers, notably in rural areas, where washing machines and fridge freezers are being purchased for the first time to improve living conditions. The penetration rates of fridge freezers and automatic washing machines in Vietnam are still low at 36% and 16% respectively allowing more room for low-tier-cities in Vietnam to grow further.

Growth is also being driven by increased product replacement from higher income consumers. These consumers are prepared to pay higher prices for premium models, appreciating improved efficacy, electricity cost and time savings. Similarly, more people are now inclined to purchase high-technology fridge freezers which can provide optimum temperature and humidity to keep food fresh for longer. There is also a growing preference for larger capacities of fridge freezers – typically 500+ litres. Large capacity fridge freezers allow people to save time as they do not need to buy groceries very often, even though the price gap between basic and premium models is significant. Side-by-side fridge freezer prices are about US$2,000, whereas double door models are typically US$450.

Similarly, in 2013 Panasonic expanded its production of washing machines in Thang Long Industrial Park II, Hung Yen province, to produce 600,000 washing machines annually by 2014. Production for LG and Panasonic in Vietnam is intended for both local market and exports.

Vietnam is one of the most politically-stable countries in Asia Pacific, governed by a single party, giving confidence to manufacturers and foreign investors to invest in the country. Also, labour costs in Vietnam are very attractive, amongst the lowest in Asia Pacific, with a minimum wage of US$79/ month.  Vietnam also has a key strategic location, close to the major markets of China, South Korea.  Given rising labour costs of production in China, companies can relocate some production lines to Vietnam.

Vietnam is expected to remain one of the leading Southeast Asia markets in major appliances due to many factors; increased disposable incomes, low penetration rates of major appliances, and increased trading up to premium products among high-income consumers. Asian manufacturers will continue to benefit from labour cost advantages and political stability.

Furthermore, with the coming of the AEC (Asean Economic Community) in 2015, greater trade freedom within Southeast Asian markets is expected, extending to emerging markets such as Myanmar, Laos, and Cambodia. Vietnam will play an increasingly significant role as a production hub, exporting more consumer appliances to neighbouring countries in the region.

How Affordability is Driving Uptake of Electric Toothbrushes in India

Consumer electronics continues its growth as the world transits into the New Normal. Retail value sales are projected to register a 4% CAGR over the forecast…

The Future of Automated Kitchens

Where Consumers Shop for Consumer Appliances

The shift to e-commerce continues in consumer appliances. E-commerce platforms see appliances as a growth opportunity, while consumers like the convenience.…