In the UK, 64% of people aged 15+ are overweight or obese, a statistic so bandied about it seems to have lost its meaning. Across the Channel though, this number is much lower, at 44%, and with 55 people in every 100,000 in France dying of heart disease, compared to 121 in the UK. So what are the French doing that the British aren’t? Data from Passport Nutrition shows that despite the difference in public health statistics, the average ‘nutritional purchase’ is remarkably similar in France as it is in the UK. The French spend as much money on packaged food as the British; they buy the same amount of protein, fat, saturated fat and salt from packaged products. The only stand out difference is the amount of carbohydrate and sugar purchased, with the UK buying a third more sugar from packaged food compared to France.

Spot the difference: factors relating to heart disease in France and the UK

The British eat more of the sweet stuff

Sugar, and sugar-sweetened beverages in particular, have received an increasing amount of flack over the last few years as high sugar intakes have been linked to increased risk of type II diabetes and cardiovascular disease. While Britain’s sweet tooth and preference for chocolate, cakes and biscuits may partly lie behind the difference in disease prevalence, it’s not the only reason. 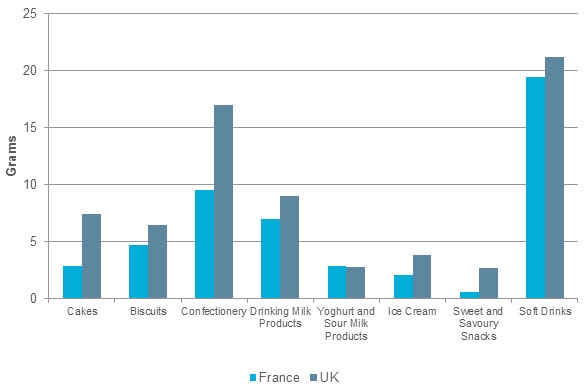 One theory explaining why the French apparently consume just as much saturated fat and salt as other European nations, yet have a lower incidence of heart disease – dubbed the French Paradox in the public health world - is the protective benefits of red wine. Rather than being a beer drinking nation, France consumes more than twice the amount of red wine compared to the UK, at 18 litres per capita, equivalent to every person in France drinking half a small glass every day. Red wine is rich in polyphenols which occur naturally in the skin and seed of grapes. Polyphenols are thought to act as antioxidants, mopping up free radicals that can damage blood vessels, therefore protecting against heart disease.

With smoking prevalence higher in France and consumption of fruit and vegetables higher in the UK, this everyday drinking of red wine, compared to the UK’s binge drinking of beer, is another stand out difference between the two nations that could help account for the varied public health figures. There are other aspects that are harder to measure with statistics that will have an impact too – like levels of physical activity, and the wider part that food plays in culture, which France is so famed for. But with the scientific evidence linking sugar consumption to heart disease mounting, if the UK is to learn anything from its European neighbour it should be to eat less sugar, and drink red wine instead of beer.