Asia continues to be a key contributor to the watch market globally, accounting for 46% of the world’s watch sales. However, top watch and luxury goods market Hong Kong remains unstable in its position in the global watch industry. According to the Federation of the Swiss Watch Industry, Swiss watch exports to Hong Kong continue to be in decline. In July 2016, the US displaced Hong Kong as the world’s top market of Swiss Watches, as effects of the factors plaguing Hong Kong’s watch industry are starting to come into play. Japan, another mature watch and luxury goods market in Asia Pacific aside from Hong Kong, is seeing an improvement with 12% growth from January to July 2016 as the government continues its effort to stimulate the country’s economic expansion. 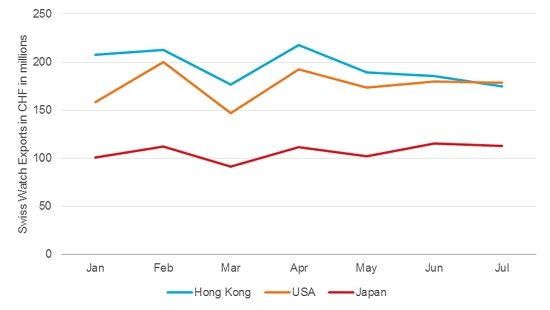 Although Hong Kong regained its leading position as 2016 comes to an end, Hong Kong saw the largest decline in the value of Swiss watch exports to their country over the past 3 years compared to fellow watch giants USA and Japan. 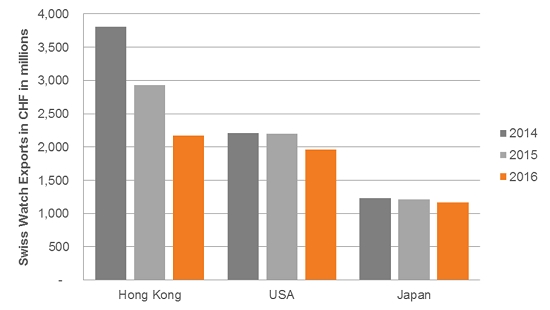 The rise of affordable luxury brands

The economic slowdown in China has dampened consumer’s confidence globally as consumers are scaling back their expenditure on discretionary items. However, this slowdown has opened opportunities for affordable luxury brands and new entrants into the mid-priced watch market. With the rise of fast-fashion, watches have quickly become a wardrobe staple. Shedding the hefty price tags from traditional watch makers like Rolex, affordable luxury brands such as Daniel Wellington, have been gaining traction in the market due to a strong following from the younger generations largely fuelled by extensive social media reach. 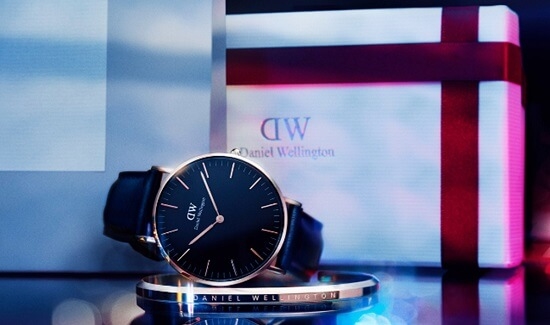 Banking its marketing efforts solely on social media has not only helped to minimise the advertising costs of the business, it proved to be more effective in appealing to Daniel Wellington’s target audience – the millennials. Daniel Wellington was a hit for its timeless design and interchangeable straps which makes it suitable for every occasion. Daniel Wellington expanded rapidly over the world, with its sales reaching US$200 million with over a million watches sold globally.

Note: A look at the values and priorities of online consumers worldwide. Results are drawn from around 16,300 online consumers ranging in age from 15 to 65+ and living in nine major markets: Brazil, China, France, Germany, India, Japan, Russia, the UK and the US.

A global survey of 16,300 online consumers revealed that many of these consumers are eager to try out new products and services (64%). This is reflected in the positive response towards new entrants in the watch market, like Daniel Wellington which was founded in 2011. Additionally, the perception of doing well also ranked highly, along with the consumers’ preference for branded goods. Daniel Wellington’s classic design which gives the watch a more premium façade works towards consumers’ preference of exuding a well-to-do image while keeping their consumer expenditure low. Hence, this proves to work in the favour of new affordable luxury brands that have been gaining traction in the global watch market like Bering (founded in 2010) and Sevenfriday (founded in 2012).

The positioning of affordable luxury brands allows them to tackle two important groups of target consumers. It serves the consumers in developing countries that are trading up and consumers in developed countries that are trading down from the traditional luxury brands. Companies in the affordable luxury segment like Michael Kors Holdings Ltd experienced a strong CAGR of 42% from 2011-2015, while traditional luxury houses are experiencing a slowdown, with Richemont SA Cie Financière seeing a decline of 2% within personal accessories.

With an increasing middle income segment in key economies in Asia, this provides a strong potential for the expansion of affordable luxury brands in this region. Emerging markets in Asia like Indonesia and Thailand where the number of middle-class households is expected to reach 27% and 26% in 2020 respectively, provides strong opportunities for affordable luxury brands to enter. Similarly, Vietnam, which is expected to see a rise in disposable income of 34% from 2015-2020 and with many international luxury brands that have yet to enter the market, is also a key country that players should enter to gain first mover advantage. Therefore, as the watch market is in decline in Hong Kong, it is important for players to look beyond Hong Kong and towards other pockets of growth within Asia like Vietnam, Indonesia and Thailand.

Turning to technology for future growth

As Asia continues to be a key driver to the global watch industry, looking towards emerging markets within Asia and the adoption of technology in product development remains important in driving growth for companies targeting Asia in the long run. In the short run, localisation in merchandising strategies is crucial in catering to the demographics of various consumers across different markets in Asia.